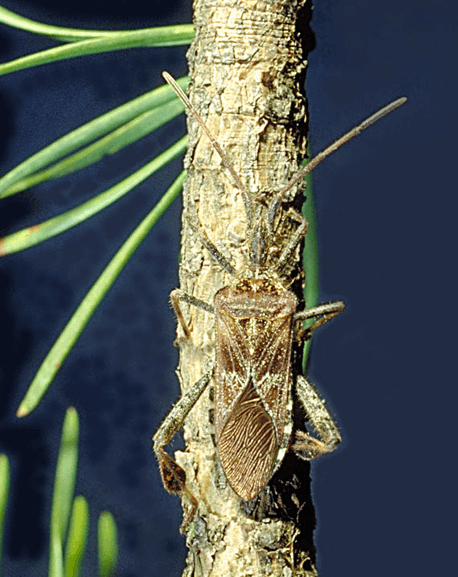 Leaf-footed pine bugs can be inadvertently carried into a home on Christmas trees. 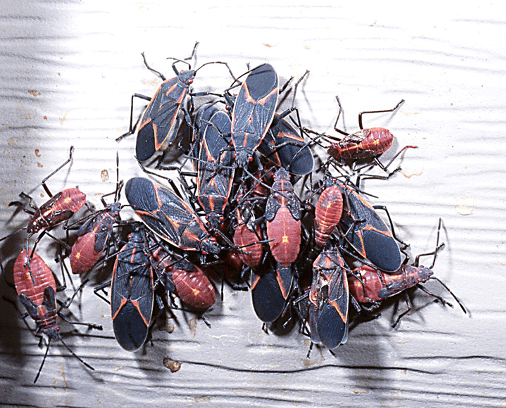 Boxelder bugs brought into a home on firewood.

If you are convinced that insects have really declared war against humans, you might want to review the rules of engagement set forth in the Geneva Convention. Specifically, note that the rules do NOT include a mandatory truce at the end of December, whether for Christmas, Hanukkah or even long-planned, full-scale, unmitigated, all-out New Year’s celebrations. Insects understand this, but apparently some homeowners expect something different.

As a result, each year at this time, some insects invade homes and surprise homeowners, as is evidenced in the letter I received this week.

I hope that you can offer some advice. I noticed an enormous web of some kind on the top of my Christmas tree last night. It seems to have come out of nowhere. Anyhow, we cleaned it up, and then I woke to an even bigger surprise this morning. The web was back, only now containing LOTS of tiny little bugs. They appear to be a mite of some sort? I am wondering if this is something to be alarmed about. I most definitely do not want these all over the house. My husband was ready to go get a bug bomb this morning, but I decided to check in with you first.

Thank you in advance for any suggestions that you might offer.

P.S. This is our first real tree and I refuse to let this cloud my fondness of a real tree.

(Note: name was changed to protect identity, and letter was edited to remove profanity)

Those of you who have been in this situation or those who may sympathize may be asking, “How could such a thing happen? Is it possible, ethical or even legal for pests to invade a home in midwinter?” You may justly cry “foul” and claim that this was an arbitrary, unprovoked and capricious act of war.

I cannot comment on the ethics of this case other than to quote the saying, “All is fair in love and war,” and reiterate, as stated above, no rule of war forbids midwinter invasions.

I can discuss how this invasion came to be, if that would be helpful. There are only three possibilities. Either it was A) planted, B) due to trickery, or C) just plain, bad luck.

If it was planted, I can think of three suspects who could have entered your home without you noticing: Santa Claus, the Grinch and your husband. The motives of each must be considered, but let me say right up front, I cannot fathom that it could be Santa. It is just not in his nature.

It may well be trickery. In war, creative, clever or unorthodox means are sometimes used to gain an advantage over the enemy. Take, for example, the story of the Trojan horse. History has it that after many fruitless attempts at penetrating the perimeter walls and even a 10-year siege to conquer the city of Troy, the Greeks pretended to give up, board their ships and sail for home. Before doing so, however, they constructed a large wooden horse, ostensibly as a parting gift or concession trophy for their enemy. The subterfuge was that they hid several of their best fighting men inside the horse. Upon seeing the enemy retreat and sail away, the Trojans pulled the horse into the city as part of their victory celebration. Late that night, the Greek warriors crept out of the horse and opened the gates for the rest of the Greek army, which had sailed back under cover of night. The result was that the Greek army then entered unimpeded and destroyed the city of Troy.

Such strategies are also used by insects to invade homes, even homes that are well fortified and defended. Ones that are constantly inspected for pest invasions, where broken windows or cracks in the foundation are repaired, ones that use screens and door sweeps and even outdoor perimeter pesticides to keep pests at bay. The subterfuge used by home-invading insect pests is much like the Trojan horse. They conceal themselves inside something that is purposefully and even joyfully brought into the home, such as a Christmas tree. Then, in the middle of a warm night, when everyone is a sleep, the enemy emerges. Inside all of the primary defenses, it has the upper hand. Up-close, personal, hand-to-hand combat is the only defense left.

Trojan horses in American homes come in the form of Christmas trees, plants that have been set outside during the summer time, cardboard boxes from the attic or the grocery store, and even firewood brought inside for burning. All of these have the trappings of a Trojan horse for insect pests.

Typical pests include stink bugs, box elder bugs, leaf-footed bugs, mites, aphids, wood borers, mantids and even spiders. Most often these enter unnoticed because they are semi-dormant due to the low outside temperatures. It is only after they are warmed up that they become noticeably active.

The good news is that these home-invading pests are actually quite harmless.  They do not bite people, harm structures or spread disease. In fact, they don’t even reproduce inside a home. But harmless or not, you probably don't want to spend the holiday season with bugs crawling around among the Christmas presents or flying into your Hanukkah candles at night.

Let’s discuss the tradition of bringing live Christmas trees – although I don’t know why people refer to them as “live” trees when anyone can see they have been cut off at the base. Clearly they are dead. Compared to plastic, artificial trees, I concede that they were at least “once alive.” In another sense, however, they may be “alive with bugs.”

Here are a couple of tips to minimize the chances of introducing bugs, even before you get the tree inside. First, inspect it carefully, using a flashlight. Look for anything other than the odd pine cone that may be out of place. Remove any bird nests, as these can contain mites. Look for signs of aphids or other small insects deep inside the clusters of needles and on the undersides of branches. Anything unusual might be insect egg cases, which could contain praying mantids or cocoons that may hatch into moths. Inspect the trunk and larger branches for small holes with sawdust trails, as they may be a sign of wood borers or bark beetles. And, of course, look for bugs themselves. A vacuum cleaner is handy for cleaning up fallen pine needles, and it's also the best way to suck up bugs, spiders, aphids, or their debris.

Most Christmas tree farms and other venues for purchasing “live” trees have mechanical tree shakers or vibrators that should be used. These are designed to shake out loose pine needles but are also effective in dislodging potential dormant intruders, pupal cases and often even eggs.

Finally, remember that wintertime/holiday bugs pose a very small risk in your home. They are uninvited but will do you no harm. Lacking food and adequate humidity to survive indoors, most Christmas tree insects die soon after invading. I tried to explain these things with my response.

Without seeing a photo or a sample, I suspect you are seeing spiderlings (baby spiders). Many different spider species can be found in trees, including pine trees, and they often deposit egg sacs containing up to a hundred or more eggs on twigs or branches. These normally wait for spring to warm them up enough for hatching. However, the warmth of your house was apparently enough to trigger this hatch. Spiderlings themselves will not cause a problem to either your home, the tree or to people. They will eventually die because there is very little food for them in your home, but meantime they may become be a nuisance. Removing them with a vacuum or wiping them off with a wet cloth while they are concentrated might be your best, first step. After they begin dispersing, it will be a much more time-consuming and difficult chase.

To answer your question about exactly how and why they got into your home, entomologists estimate that only 1 in 1,000 Christmas trees deliver holiday insects and that you happen to be the unfortunate recipient of just plain, bad luck. As for me, I don’t think this was a Santa surprise. I don’t know your husband or his motives, so without further evidence I am leaning toward the Grinch. This one has his green fingerprints all over it.