Researcher cleans up in soybean contest

Xuan Luo can often be found in the lab. In her white coat and goggles, she stirs up new ideas for soybeans. Testing new ideas and achieving success are what excite Luo most about working in a lab. In fact, Luo has discovered her passion for innovation in a Purdue lab.

“I like innovating in the lab, because I’m not good at writing,” Luo joked. “I am really careful and notice the small things, which is important when experimenting in a lab.”

The junior agricultural and biological engineering major from Zhengzhou, Henan, China, put her love of discovery to work in some tangible ways. She and a team of fellow students earned a provisional patent for a soy-based laundry detergent pod they developed for the Soybean Innovation Competition. The annual contest involves student teams who have produced a variety of new soybean products, including play dough and cosmetics. 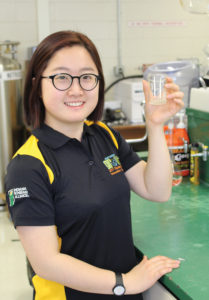 Photo by Cameron Mann
Xuan Luo and her team developed a new soybean-based laundry detergent pod for the annual Soybean Innovation Competition. The team earned a provisional patent for its work.

Luo and her teammates spent many late nights in the lab working on their detergent pod. Luo said the pod is just like other detergent pods that you throw into the washing machine — but her team’s pod has a few advantages.

Luo’s product is more environmentally friendly because it doesn’t contain polyvinyl alcohol (also called PVA) like other pods. Luo said this pod does not pollute the water or harm marine animals, because it is made with soy. In addition, the soy-based pod doesn’t stick to clothes as easily as current detergent pods do.

“I think the advantage of the soy film completely breaking down in water and not sticking to clothes, even in large loads of laundry, was the biggest advantage of our product,” Luo said.

Luo recalls the exact moment she and her team discovered that their soy-based film would completely dissolve.

“Our team had several failed trials, but we finally had a breakthrough when we put down our soy protein film on wet clothes — it just didn’t stick! It dried out completely separate from the clothes,” said Luo. “We felt like we had found the next really big thing!”

For Luo, that moment of discovery was when she realized she loves innovation.

“I just felt really, really happy that night, and from that moment on I have really enjoyed the sense of achievement I get from innovating,” Luo reflected. “You never know what you might discover next, and maybe the times you are struggling in the lab the most are the times you are most likely to discover the next big thing.”

“I think the versatility that the soy-based film we developed offers is the reason we were the only team to be granted a provisional patent,” Luo said. “Receiving the patent made me more excited to keep innovating even after the competition was done.”

Luo intends to keep pursuing her passion of innovation by competing in the competition again this year. She is already experimenting on a new soy-based shampoo ball. Her goal is to develop a product that makes going through airport security with shampoo more convenient.

As Luo continues to innovate, she is constantly reminded that innovation requires patience and persistence.

With Luo’s persistence in mind, you are certain to continue finding her in a white lab coat and goggles, working hard as she pursues her passion for product development and innovation.

Students put their education to use by developing new products from soybeans by working in teams. The teams must develop, produce, and market a product and research patent information.

Previous contest winners have commercialized many products, such as play dough, hand soap with soy exfoliate, and air fresheners. The Student Soybean Product Innovation Competition has generated a renewed interest among students for innovation and hands-on learning. At the same time, industry has been able to gain new ideas, new products, and new employees thanks to the competition.