Jordan Paine has been on many adventures, but one of her most memorable was in 2013. That was the year she traveled to Haiti and helped build houses. Emotions were high when a woman prepared to enter her new home.

“We had a translator there, but it didn’t take a translator to see the emotion,” said Paine, a senior agricultural education and political science major from, Oxford Nebraska. “That woman was crying tears of joy. She knew that her life had been changed, she now had a place to call home, and that her life was changing for the better. Her joy and excitement was something I will never forget.” 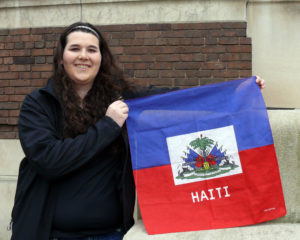 Photo by Abigail Bender
Jordan Paine has been on many international adventures. But the senior agricultural education and political science major from Oxford Nebraska said one of her most memorable moments was in Haiti.

International adventures are a big part of Paine’s Purdue experience. She’s also traveled to Columbia and will visit Ireland and New Zealand later this year. For Paine, being able to share that Haitian woman’s experience is more than just an adventure, it changes her perspective.

“I am always planning my next adventure,” Paine said. “Mostly because I like to plan a lot of things, but also like to jump on opportunities as they arise.”

Being able to shared that woman’s experience is just part of the thrill she gets from traveling. Paine explained that her travels have helped her become who she is today. When she traveled to Colombia, she said it was the first time she was truly able to find out who she was as an individual and had the opportunity to talk and interact with the people there and learn more about who they were.

However, Paine doesn’t have to leave the country to find adventures. She said she also appreciates traveling in the United States. She travels a lot by car and enjoys sight-seeing and hiking on trails along her route.

“I actually prefer to drive more than fly, because it is cheaper for one and I love seeing the topography across America as well as the agriculture throughout U.S.,” she said. “When flying, I miss out on that.”

Her next adventure will involve hitting the road to Montana to student teach at an American Indian reservation. She explained that teaching is not her career goal, but she would like to make the most out of her traveling experiences. Being able to teach outside Indiana would give her a teaching experience like no other.

“Being able to student teach on an Indian reservation not only develops all the skills of normal student teaching, but also working and communicating across cultures,” she said.

But she also plans to take advantage of visiting a new place.