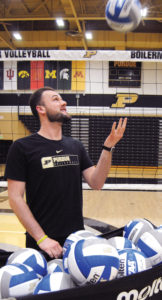 Photo by Allie Abney
As a manager, coach, and player, Ethan McNeely, a senior agricultural economics major from Scottsburg, Indiana, has learned to juggle a lot of different responsibilities and not let any balls drop.

When the Purdue women’s volleyball team found itself far behind in a match against Wisconsin, Coach Dave Shondall turned to the bench and asked for some energy. Although he wasn’t a player on the court, Ethan McNeely, the team’s manager, responded in a big way.

Purdue didn’t win the match, but even the Wisconsin fans walked up to McNeely after and asked if he still had a voice. His enthusiasm also impressed the team and the coach.

“Coach Shondall told me that my energy and enthusiasm really made an impact on the team’s performance,” said McNeely, a senior agricultural economics major from Scottsburg, Indiana. “I was asked to travel with the team for the remainder of the semester.”

The senior agricultural economics major from Scottsburg, Indiana, is not just a cheerleader. He’s spent his life playing and watching the sport. This passion is rooted in his experience playing volleyball in his backyard, on his church’s team, and as a manager for his high school’s varsity team.

“What I really love about volleyball is that it is so high speed, high intensity, and every touch on the ball matters,” McNeely said. “You can never turn your eyes and attention away from the game.”

As a manager, he records player statistics, runs the practice clock, tracks points during drills, helps with hitting lines, shags balls, and keeps the court clean so the players can be the most efficient with their time during practice.

McNeely loves the game, so he said he doesn’t mind the long hours — as much as 30 hours a week. Still, the work is a big commitment. Once he learned he had the managing job, he met with his advisor and changed his class schedule to accommodate practices. He even decided to alter the concentration in his major.

But his commitment to volleyball refuels, energizes, and supports him.

“My time with volleyball is not draining,” McNeely said. “I have enjoyed developing relationships with the players and coaches because it has provided a support system for those times when your schedule feels like it is too much.”

Part of that support system, he said, is being a classmate and friend to the players off the court. That took some time. McNeely said he was star struck when he first met the team. He had been following and watching the Purdue women’s volleyball team play since his freshman year of high school.

McNeely’s love for volleyball extends beyond the Purdue team. He wanted to share his enthusiasm for volleyball with others, so he also coached the Boiler Juniors Club team in Lafayette, Indiana. He worked alongside the Purdue coaching staff with a team of 13-year-olds. His role as the team manager helped him as a coach.

McNeely said he strived to teach his club team the importance of communication. But McNeely doesn’t just watch volleyball. He also plays on the Purdue men’s club team. And he brings the lessons he’s learned as a manager to his team.

“Playing on the club team, I’ve learned you cannot always be the star on the court but you can make a huge difference on the bench,” McNeely said. “One weekend, we were playing Illinois, and even though I wasn’t playing, I was on the sidelines cheering. Everyone on the court was so excited, and we ended up beating them.”

McNeely has found many ways to use his passion for volleyball to serve his community in southern Indiana and at Purdue. His volleyball experiences also took him around the United States and even into Europe.

“I saw so many things that I never thought I would see,” McNeely said. “Before I came to Purdue, I had never even flown on a plane and in one season with volleyball I was in a plane three or four times a week.”

But at the center of it all, McNeely just loves volleyball. And even after earning his degree, he said he is confident he will continue to find ways to stay near the court. He is excited to work with athletes and focus on youth development.

“Being a manager, coach, and player the energy I bring to the court is a tangible thing.”