Vincent Finnell stays extremely busy, like most college students. But after his trip to Cartagena, Colombia, he makes sure to take the time to stop and appreciate all the different cultures around campus.

“Taking time to just stop, look around, and take in all the culture on campus is something we take for granted every day,” said Finnell, a senior natural resources and environmental sciences major from Indianapolis. “After I got back from my trip I knew I had to do it more often.” 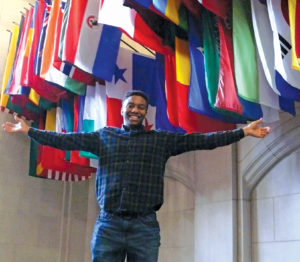 Photo by Emma Martin
Vincent Finnell, a senior natural resources and environmental sciences major from Indianapolis, says his recent experience in Colombia inspired him to appreciate all the different cultures on campus.

While in Colombia, Finnell learned about the Palenque, an Afro-Colombian community that formed nearly 400 years ago outside Cartagena as a sanctuary for escaped slaves. Finnell said feelings were high when he entered their homes and spoke to people about their history and culture.

“The willingness to share their culture and history was amazing,” he said. “I remember one woman in particular invited us into her home like we’d known her for years.”

The woman taught Finnell about the art of candy making while he was in her home, and she loved every part of what she does.

Finnell had never been out of the country prior to his Colombia trip. In fact, he didn’t even receive his passport until right before the trip.

Finnell always wanted to travel but wasn’t sure if he would have a chance.

“The study abroad programs and scholarships at Purdue are wonderful. They are what made me realize that the only thing standing in my way was me.”

Learning from the Palenque was eye-opening, but Finnell said his other experiences in Colombia were just as valuable. He and his group toured Cartagena, rode motorbikes through the city, ate local cuisine, got inside a mud volcano, and swam in the Caribbean. But he recalled one night in Cartagena where he let loose and allowed the culture to seep in.

“We danced all night — with each other and with the locals,” he said. “It felt like everything else wasn’t important at that moment.”

Finnell said he knows he can dance anywhere, but the dancing was an insight into what he learned from the people he met.

“Part of the culture is living a little looser and not letting time dictate your every move.”

And that insight has remained with him back in Indiana.

“I don’t always have the time to just let loose while I’m at school, so getting to do it here while experiencing the culture with these wonderful people made it that much more enjoyable.”