Every weekend for two years Rebekah Lumkes has been getting ready for research by putting on a pair of muck boots. Sometimes she sweated through 90-degree heat in hip waders, other times she bundled up against 10-below-zero blasts. Whatever the weather, Lumkes brought her boots, a keen eye, and a positive attitude.

“I really wanted to get into an outdoor research project with a field component because I love being outside,” said Lumkes, a senior wildlife major from Lafayette, Indiana.

Lumkes researches river otter behavior and their surrounding habitat. Since river otters were reintroduced to Indiana in the 1990s researchers wanted to see if their behaviors have affected other local animal species in their habitat. 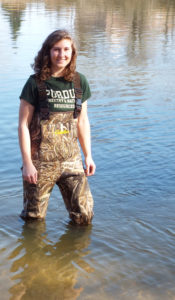 Photo by Regan Holtsclaw
Rebekah Lumkes, a senior wildlife major from Lafayette, Indiana, researchers river otters and their effect on other animal species.

Lumkes is very focused on her work now, but her research began on a whim. When she volunteered for research, Lumkes asked a random wildlife professor who researches mammals to help her get started. But early on, she realized she had a passion for the work.

“I really got hooked on research because I really like spending my time outside and I feel like there is more of a meaning with this research because we are interacting with our environment,” Lumkes said.

After six months, the professor gave Lumkes her own research project section.

ng on my own research section for over two years!” Lumkes exclaimed.

She even discovered her major in an accidental way. She was minoring in wildlife until her first class and she learned about her professor’s work.

“I just thought, ‘Whoa, people do this for a job?’ I already enjoy studying wildlife. I had no idea you could make a career out of it,” Lumkes said.

Lumkes’ work in research has even motivated her to reconsider her plans after graduation. She wants to attend graduate school and continue researching. She said she likes going out in the field to collect data and to ponder things when the data don’t match her hypotheses.

“On a practical note, this research gives me a lot of skills for grad school and future jobs,” she said. “Like how to set up trail cameras and field scout. While beginning research you also learn a lot from your mistakes and that has been a large factor for me.”

The work also appeals to her competitive spirit. For her work with river otters she tries to be the best student and person she can be. Her favorite part is how competitive research can be and how fascinated she is by it.

“Research is cool because you can pose a question and watch how the answer unfolds as you collect data and get farther along in the project,” Lumkes said.