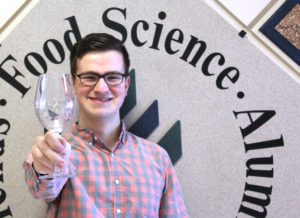 Photo by Khyleigh North
Deklin Veenhuizen wasn’t always interesting in majoring in food science. But once his sister convinced him to give it a try, Veenhuizen found that he loved it.

Deklin Veenhuizen is excited to start his career in a few months with Diageo, a wine and spirits company. The work will allow him to help people in a way he never imagined he would. His job will also allow him to explore different areas of the food science industry.

“While I’ve been focused on food most of my career, one of the things that most piqued my interest was the different mixes and how alcohol reacts to make different flavors,” said the senior food science major from Greenwood, Indiana.

Listening to him speak, it’s hard to imagine that Veenhuizen once never gave a food science career a second thought. Before starting college, he only had one thing on his mind: medical school. But Veenhuizen’s love for food science began when his sister, a Purdue Food Science graduate, urged him to meet with a food science advisor.

What interested Veenhuizen the most was the fact that he could do so much with a food science degree that he never imagined possible. He was already passionate about helping people. Food science opened that door up even further.

Looking back, Veenhuizen is happy he took a chance and talked to the food science coordinators at Purdue. He was dead set on a medical major and although he really wanted to pursue it, he was easily opened up to a new major.

Veenuizen’s sister, Katherine Clayton, had a large hand in helping him discover his true passion. Veenhuizen grew up in a rural community with his parents, and a sister who wanted what’s best for her brother.

He said that she helped him see that there was more to food science than just cooking food or inspecting food.

Once Veenhuizen started in the food science program he discovered he enjoyed the science and the idea that it helped people. Although it differed from his original plan, he found a home in food science.

“Getting into it, you realize there’s a lot of food safety and microbiology that go into it (food science), as well as chemistry and everything else,” said Veenhuizen.

After deciding that food science was in fact the route he wanted to take, Veenhuizen had some interesting experiences his first year of college.

“I went and shadowed with my sister. She left Purdue and went to work for Litehouse foods in Idaho. She was working on research development for dressings and dips. I went and did a shadow week freshman year with her” explained Veenhuizen, “I thought, wow, this is really cool. I get to apply science and also do some innovation as well.”

Going to shadow his sister was a great experience for him. He noticed the application of food science in the industry and that he could make an impact in a different way than medicine. It continued to show him that food science was right where he needs to be.

Veenhuizen would not be so passionate and graduating from the food science program without his older sister’s help. She sparked his passion for food science. At this point, Veenhuizen does not plan on going to medical school, but he is happy he is able to if he decides to in the future.

“Food science has become a part of my life that I didn’t know I already had,” Veenhuizen said.