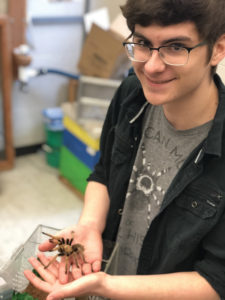 Photo by Hunter McGraw
Nick Cazzaniga shows off one of his 29 pet tarantulas. The sophomore entomology major from Bethel, Connecticut, brought his tarantulas to Purdue and keeps them in the Boiler Bug Barn, a facility that educates the public and campus communities about spiders and other arthropods.

Spiderman. Bug kid. Tarantula keeper. Nick Cazzaniga could be called all these things. He shrugs it off. When you have more than two dozen pet tarantulas like he does, nicknames come with the territory.

“They’re my beloved pets but also part of my passion and my career,” Cazzaniga said. “They’re something that I wouldn’t give up for anything and something I hope to continue to invest in for the future — be it in study or otherwise.”

The sophomore entomology major traveled from Bethel, Connecticut, with his 29 tarantulas to attend Purdue. Cazzaniga explained that his odd pets have been a lifelong passion. When he was 12, his father drove him to a reptile expo in New York, where he left with his first tarantula — by accident.

“I had no idea you could keep them as pets, but I instantly fell in love with it,” he said.

As his love for the tarantulas grew, his first tarantula has become 29. Over the years, Cazzaniga said he became fascinated with the creatures and couldn’t stop collecting them. Like any pet, he gives them names that fit just who they are.

Some are named after famous spiders from Hollywood movies — like Shelob from The Lord of the Rings — and others are named for their attributes. Autumn gets her name from sapphire, the birthstone of September. Autumn has a dazzling sapphire-blue coloring that even the most confirmed arachnophobe could admire.

Cazzaniga’s parents got used to having tarantulas in their house — even the ones that are not as pretty as Autumn. Still, they were happy their son was taking his pets to college with him.

“My parents were a little relieved that they wouldn’t have to take care of them,” Cazzaniga said. “But my father actually decided to get his own when we had our breeding here last year, and now he enjoys his own eight-legged pet.”

Cazzaniga knew a dorm room was not the right place for his spiders, so he had a little help bringing them along for the college experience.

His pets are housed in the Boiler Bug Barn, an invertebrate “zoo” that helps educate students and visitors. Cazzaniga also works at the Bug Barn part time where he can tend to his pets and help educate those who come to visit.

But he has to feed them only once or twice a week — they usually just eat a cricket or two. The tarantulas’ low-maintenance lifestyle allows Cazzaniga more time to interact with and educate people about them.

“Most of the professors don’t know a whole lot about them, and I kind of find myself being the go-to for questions” Cazzaniga said.

That’s because arachnids are in a gray area for scientists, Cazzaniga said. There aren’t many dedicated arachnologists in the United States. Cazzaniga’s face lights up when he begins to talk about the demonstrations and education he’s able to do with his pets. He said spiders are misunderstood and really aren’t the monsters they’re made out to be.

“It’s funny, because a lot of the time it’s the kids who are interested in them and aren’t afraid to learn and come forward,” he said. “It’s the parents who take a step back.”

Cazzaniga said he enjoys educating people about the tarantulas. Cazzaniga loves the idea of education so much he has even considered a teaching career.

“To me, it’s about getting everyone involved and educated.”

He said he can also see himself working with zoos and keeping live collections of tarantulas and other invertebrates. He also likes conservation and would like to see native tarantula populations recover. He said he plans to work with an endangered species of tarantulas through captive breeding.

“We’ve got a responsibility to all our species, big and small. If educating and maintaining live collections can make a difference for some of these, there’s nothing more I’d like to do.”