Lauren Hibbler always loved food. But it was candy that captured her imagination.

“My favorite candy is Snickers — I love how Mars puts so many ingredients in one chocolate bar,” said the senior from Indianapolis. “The peanuts add the crunch, the caramel is smooth, and the nougat dissolves in your mouth and brings it all together with the chocolate.”

As she was savoring her candy, Hibbler started thinking she wanted to work for a candy company — think Willy Wonka’s chocolate factory. 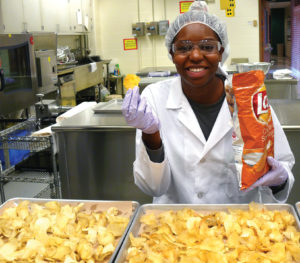 Photo by Danae Baskin
Lauren Hibbler, a senior food science major from Indianapolis, recently took a food processing class that involved studying potato chips. “A part of our experiment was to see if we could get regular potatoes to compare to Lay’s Cheddar and Sour Cream potato chips,” Hibbler said.

“Willy Wonka used chemistry and science to develop new candies, compounds, and flavors,” Hibbler said. “The science behind creating an everlasting gobstopper or a three-course meal strip of gum was, and still is, fascinating to me.”

Although she dreamed big, Hibbler wasn’t exactly sure what kind of education she would need. At one time, she thought she would end up in chemical engineering. That changed after Myron McClure visited Hibbler’s high school. McClure, assistant director of the Purdue Agriculture Office of Multicultural Programs, listened to what Hibbler wanted to do and offered a simple suggestion.

Hibbler soon learned that McClure’s suggestion was a better fit for her, so she majored in food science at Purdue.

But that wasn’t the end of Hibbler’s journey. Although she still loves candy, she learned that she doesn’t exactly want a career in manufacturing. She learned that after working in a food science lab.

“I worked there for about six months during my freshman year, but I learned that I didn’t really like food processing,” Hibbler said.

Still, the experience was meaningful, because it encouraged her to explore other areas in food science. And now, she savors something even more than candy: food safety.

“I learned about food safety and I wanted to do food micro(biology),” Hibbler said.

No matter what Hibbler does, one thing continues to motivate her.

“I love food!” Hibbler said. “Even now, I live at my own place and I just like to experiment with food but I don’t always like to follow the recipes. I’m like ‘Oh, what would happen if we added this instead?’”

When she was a child, Hibbler said she always loved to cook. If you knew her then, you’d probably think she was destined to become a chef.

“The main difference between food science and being a chef is that to be a chef you have to know how to cook,” Hibbler said. “I like to experiment with food, but I would not say I’m always a good chef.”

Her love of experimentation also led her to explore other areas of food science, including product testing.

“I’ve been doing research to see how a vegan patty compares to a regular burger,” she said. “If you add more grease, would the consumer still buy it? This is a good part for the business world of my major.”

“We’re developing a popcorn product and we have four different original flavors,” she said.

The popcorn project provided Hibbler with several opportunities to network with professionals in the industry. It so happens that one of the advisors for MANRRS is the same man who visited her high school and gave her the idea of studying food science.

“Myron and a few other people have reached out to industry professionals, and I have a lot of contacts now,” Hibbler said.

Hibbler is still exploring options but knows that food will be a big part of her life.

“I really want to go into the beverage industry and I really like fruit,” Hibbler said. “I want to figure out how to mix fruit but also make it more sustainable to the community.”