Erica Timmons wants to make a difference in the world.

She has a passion for learning about the systemic issues of poverty in developing countries, and she is pursuing a career to find solutions to help address agricultural concerns in those countries. 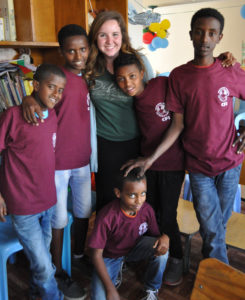 Photo provided by Erica Timmons
Erica Timmons (center) credits travel, particularly to Ethiopia, with inspiring her to pursue a career in international development.

“The effects of systematic poverty are affecting real people’s lives around the world,” said Timmons, a sophomore agribusiness management and Spanish major from Lebanon, Indiana. “I think those who have the ability and knowledge to alleviate these issues also have the responsibility to try and do so.”

When Timmons describes her goals, she says she was given an opportunity to travel internationally and saw communities struggling with the symptoms of poverty. She decided she wanted to make a career out of helping solve international development problems. It all started with travel.

Her world travels began in 2009 when she visited Ethiopia with her parents and older brother to finalize the adoption of her younger brother. After viewing the community, the family decided to raise awareness and generate support to help other abandoned orphans.

Since then, Timmons traveled to Ethiopia eight times with the organization her family founded, Hope for His Children, to partner with organizations that provide aid for orphaned, abandoned, and impoverished children.

“We call it ‘orphan prevention’ because most of these children [in the program] come from single-guardian homes, so they are one person away from being abandoned,” Timmons said. “We fundraise to prevent that.”

Today, Hope for His Children is an integral part of Timmons’ life. But she admitted that she felt she was too young to understand the complex problems of poverty when visiting countries like Ethiopia when she was younger.

“My passion for the people and nation of Ethiopia has grown with time, through the relationships I have built and the knowledge I have gained every time I return,” Timmons said.

Some of her favorite memories involve interacting with the Ethiopian people.

“In Ethiopian culture, it is very natural to sing at social gatherings,” she said. “There have been so many times when we are waiting for the next activity to start or for someone to arrive, that our kids just gather in a circle and start singing. We all start singing, which leads to dancing, which leads to laughing… a lot of it directed at me.”

Timmons’ concern isn’t confined to Ethiopia. She said she also hopes to make a difference in Latin America.

“I’m fluent in Spanish,” she said. “And my passion for the Latin American culture made majoring in Spanish an easy decision.”

She said her Spanish major diversifies her education and gives her a wide skill set when combined with her studies in agricultural economics. Both skills will help her pursue her dream of a career in international development. No matter what the future brings, she has a simple goal.

“I want to be a part of empowering others. So many smart and capable people — many of them children — just need the right tools to be able to change the story of their future, their family’s future, and their country’s future,” Timmons said.