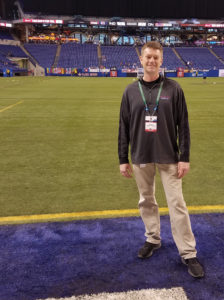 Photo provided by Erik Harlow
Erik Harlow loves the opportunity that his job at Lucas Oil Stadium provides. In 2017, Harlow made a highly visible turf repair at the Big Ten football championship.

Game days at Lucas Oil Stadium in Indianapolis start quietly. Players make their way to the field to start warming up. And Erik Harlow, the stadium’s turf manager, enjoys talking with the trainers and personnel from the teams.

Harlow watches the game-day atmosphere build. Over the course of the morning, things turn from quiet to game-day crazy. Fans, workers, and athletes slowly trickle in and the commotion begins to rise. He enjoys the calm before 65,000 fans pack the stands.

“That electricity you feel right at the beginning of an event — that is by far my favorite part of this job,” said Harlow, who earned a bachelor’s degree in turfgrass science from Purdue in 2010. “I love that atmosphere and being down on that field getting to experience that.”

He’s used to seeing elite athletes perform in the spotlight, but he almost always works in the background. Harlow got his moment in the spotlight during the 2017 Big Ten football championship at Lucas Oil Stadium when he had to perform one of the most televised turf repairs ever. The turf in one end zone got all ripped up at a critical moment in the fourth quarter.

At the time of the repair, Harlow said he was unaware the cameras were still rolling, let alone the attention that he was getting on social media. He simply focused on doing his job.

“I saw right away what had happened, and at that point I just had this laser focus,” Harlow said. “I was telling myself, ‘Stay calm, be confident.’ The referees at the time were looking at me to give them an answer or solution because they didn’t know what to do.”

Although Harlow enjoys working on the big stage for televised sports, he does not seek to be the center of attention. The attention belongs to the athletes. He said he was slightly overwhelmed by the responses he got on social media and was not expecting to be in the spotlight that day.

Before his time in the spotlight, Harlow got a taste of managing fields for televised sports in college. At Purdue, Harlow worked on the sports field crew for three seasons. During that time, he helped maintain the field at Ross-Ade Stadium, the baseball field, and soccer complex. He also had a few internships that made him love the atmosphere of high-end sports even more.

“I enjoyed working in that higher level televised sports where you have large crowds that attend,” Harlow said. “I just like that high-end atmosphere. It’s what drew me to turfgrass management as a profession.”

But his first job after graduation was working for an organization in Carmel, Indiana. He enjoyed working there and learned many valuable lessons, but said he felt like he was missing something. So, when he saw the job opening at Lucas Oil Stadium he knew he had to apply.

The job at Lucas Oil is different, because he works with artificial turf instead of grass. Although both playing surfaces need regular repairs, artificial turf repairs are often more expensive and time consuming. However, Harlow was willing to make that tradeoff to get back into professional sports.

Harlow practiced and trained almost 10 years on natural grass. In some ways, he said, he had to start over at Lucas Oil. But the most important thing is to do something you love, Harlow said.

“The work can be hard sometimes. It can be physically demanding and long hours. But if you can manage all that and keep a positive attitude about it, I think it will help you down the road,” Harlow said. “Enjoy your time and have fun with it. If you don’t enjoy it, find something else to do because if you don’t enjoy your job it will drive you crazy.”