Where chemistry and cuisine combine 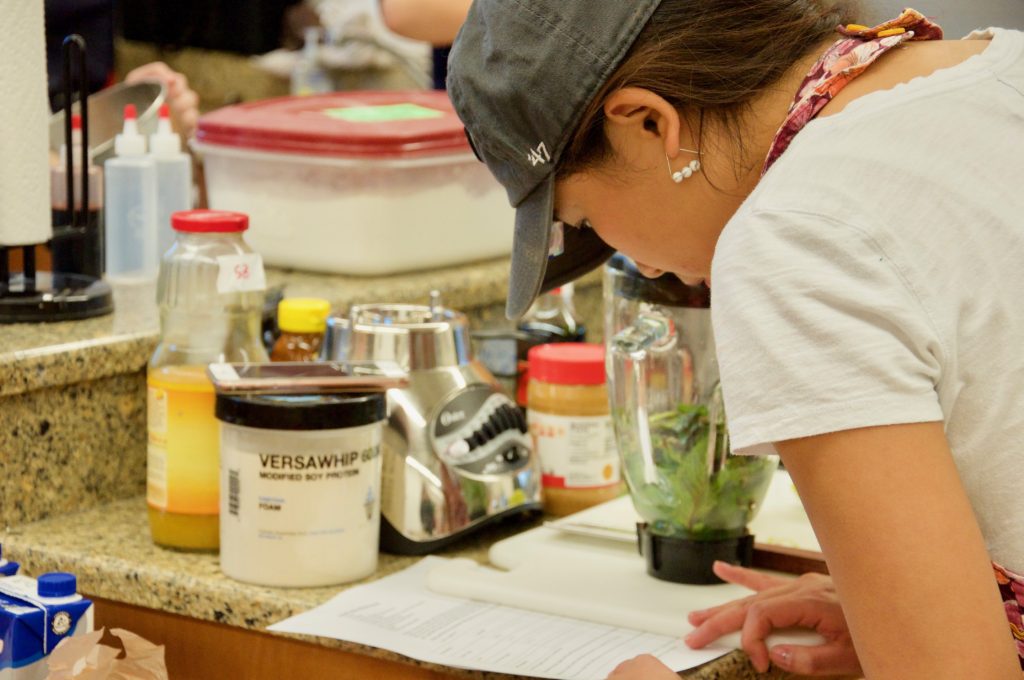 Recipes for Tres Leches cake routinely call for letting the cake cool completely before pouring the three-milk mixture over the top. The liquid is supposed to absorb, making the spongy cake supremely moist.

That’s the way Gabriela Calzada Luna made the cake — her favorite birthday treat as a child — while growing up in Mexico. But the dessert never quite turned out right, with the cake becoming soggy and some of the milk mixture draining to the bottom of the pan.

“It’s supposed to absorb that liquid and retain it. When you cut it, it’s not supposed to run out,” said Luna, a graduate student in food science.

For years, Luna and her family stopped their attempts to make Tres Leches and instead went to a local baker, but she is going to try her hand at the cake again based on a newfound understanding of the chemistry of the ingredients.

Luna was a student of the fall 2017 FS 531 Science of Experimental Cuisine course in the Department of Food Science. The class dives deep into the application of food chemistry and ingredient functionality, analyzing the molecular capabilities of ingredients and how they can be manipulated, a sort of marriage of food science and culinary arts.

“In addition to learning the traditional and emerging cooking techniques, we want them to understand why they work and when they don’t,” said Lisa Mauer, a professor of food science who teaches the course. “We are putting a scientific explanation under those new foams, frozen products and gels that you see in cutting-edge gastronomic techniques.”

That dual understanding is something that has benefitted Allie Kingery, a senior advisor in the Department of Food Science and an instructor for the course. She has a bachelor’s degree in food science from Purdue and is a trained chef.

Having seen both sides, she understands how food scientists can improve by understanding the culinary arts and vice versa.

“It has been said that students who graduate with a degree in food science can make food safe or process food, but don’t always have a sense of flavor, how to make food look and taste good,” Kingery said. “I want them to understand what they can manipulate in a food or recipe, and be able to predict what the result will be.”

Luna applied those lessons to the Tres Leches recipe and found that she could get a spongier texture if she was careful with and didn’t break down a foam formed when she beat the egg whites for the cake. And pouring on the milk mixture while the cake is still hot, rather than letting it cool, helps cook the egg in the milk mixture and trap the moisture in the cake.

“When you let the cake cool, the starches on the surface of the cake go through a process called retrogradation, which creates a barrier that is good for trapping moisture inside the cake. But if the cake cools and the starches retrograde before the milk is poured on, the starch barrier prevents full absorption of the liquid” Luna said.

Mauer said the course is structured so that students can take the lessons and go in their own directions, applying them to different recipes or ingredients. Luna was interested in understanding how to manipulate her family’s traditional recipes, while others wanted to “see how far they could push the science,” Mauer said.

That led to creations such as “mozzarella balloons filled with pesto,” made by warming the cheese and inflating it with gas before pumping in the pesto, and “glass potato chips,” which came from starches extracted from potatoes that were cooked then cooled in thin, clear sheets.

For their final projects, students developed themed menus and used their newfound understandings of ingredients and techniques to prepare meals for a panel of judges who were chemists, engineers, microbiologists, and sensory scientists.

Students explored forward and reverse spherification techniques to create different textures and shapes of gelled products. They experimented with different time-temperature combinations to manipulate the colors and flavors produced by the Maillard reaction, the chemical reaction between amino acids and reducing sugars that browns foods and creates new flavors. And they employed liquid nitrogen and an anti-griddle to create frozen delicacies.

In a flower-themed project, a student manipulated the pH and formulations of beverages containing anthocyanin pigments extracted from butterfly pea flowers, resulting in an interesting series of color changes.

James Chapa was one of the students interested in pushing the science. He was interested in perfecting a 6X °C egg, so-called because cooking the eggs sous vide at temperatures between 60 and 70 degrees Celsius create unique textures in egg yolks.

“The proteins are denaturing and forming a gel that’s totally different than what you would get in a hardboiled egg or softboiled egg,” he said.

Chapa couldn’t find great instructions for creating an egg with a firmly set white, while maintaining a yolk that is gummy but with a honey-like consistency, malleable like a piece of warm caramel.

“It has chew, but you can completely deform it if you pushed it around your plate,” Chapa said, “nobody really knew how to do this, or at least they weren’t explaining it very well in a way that I could reproduce.”

Rather than use trial and error and dozens of eggs, Chapa used what he learned about egg proteins and built a mathematical model that took into account the size and shape of the egg and the different temperature-dependent kinetics at which the proteins in the egg white and yolk cook.

Using sous vide, a cooking method in which food is placed in a constant-temperature, circulating water bath, Chapa’s egg cooks for 8 minutes at 90 degrees Celsius, and then for 52 minutes at 64 degrees Celsius. The initial higher temperature quickly and perfectly sets the egg whites, while the lower temperature slowly brings the yolk to the desired consistency without overcooking the whites.

Food Science students are often trained extensively in food chemistry, processing techniques and product development, but this course gives them insights into how products they might work with will be used by chefs and home cooks.

“This class is where the rubber meets the road,” said Brian Farkas, head of the Department of Food Science. “Not only can they understand the intersection of the science and culinary sides, but this is something they can talk about in an interview. It absolutely gives them a leg up.”