In recent months, there have been several reports of strong increases in farmland values. Fourth quarter Federal Reserve Bank of Kansas City survey results indicate an annual increase of 17.6% and 17.5% for irrigated and non-irrigated farmland in Nebraska. The annual increase for non-irrigated farmland in Kansas was even stronger at 19.5%1. In Iowa, Indiana, and Illinois, the Chicago Federal Reserve Bank survey reported annual increases of 18%, 12%, and 11%, respectively2. These increases follow a long-term trend of rising farmland values – since 1985 Indiana land values have increased by 270%, a compounded growth rate of 5.4% per year. These large increases have created considerable debate about the level of current farmland prices and what the future might hold.

There are several drivers that influence farmland values. One key factor of the farmland market is the net return from crop production, currently at historical highs. However, farmland markets are also influenced by factors such as the potential conversion of farmland to urban development, qualification as like-kind property in federal tax law Section1031 tax-deferred exchanges, and capital gain tax policy. It is also important to recognize that annual farmland transactions are a small amount of the total farmland available, making this a market where the value of only a few transactions is generalized to the whole. Financial forces such as interest rates and alternative investments also exert an influence on farmland values. Expectations about these financial forces and future earnings strongly influence market activity and farmland price.

Because the evaluation of a capital investment is so common, analytical models have been developed. One of these models is income capitalization for a capital asset with an infinite life (Equation 1, below). Assuming the asset has an infinite life simplifies the model. If farmland is properly maintained, farmland may be an infinite life asset. Farmland will generate income for the current owner and for future owners. This assumption also means that the income level for owning farmland and the growth rate in farmland income must be realistic for a very long run. In periods of relatively high crop prices expectations about income levels and changes in income may become overly optimistic.

This income capitalization model says that farmland value is determined by the income generated from owning the asset, the interest rate on low-risk securities such as 10-year Treasury bonds, a risk premium, and the growth rate of income. The interest rate plus the risk premium represents the discount rate, the rate used to adjust expected future income. In this model, increases in farmland values can come from increases in income, decreases in the discount rate, or increases in the growth rate of farmland income. Each of these factors is discussed.

Income in Equation 1 represents the net return to a farmland owner. This is the net income remaining from crop production after all expenses except the return on the farmland investment have been subtracted from revenues. This means crop production inputs, investments in machinery and equipment, operator and family labor, and farmland maintenance costs are included as expenses. The capitalization model indicates a positive relationship between income and farmland value–the greater farmland income, the greater the farmland value.

A major contributor to current farmland income is high crop prices. Beware, increases in crop prices are often followed by increases in fertilizer, seed, chemical, and other input prices. Crop price increases a few years ago were accompanied by fertilizer prices in excess of $1,000 per ton and significant increases in seed and other crop input prices. As a result, when thinking about income from farmland ownership, it is important to focus on the net that remains from crop production after all resources except farmland have received a payment. In many cases, cash rent is used as a proxy for this return.

The discount rate recognizes and implements the time value of money–future income is not worth as much today as current income. This is an important concept because the income from a farmland investment will be received over a number of years. The discount rate adjusts expected future income to a current value. 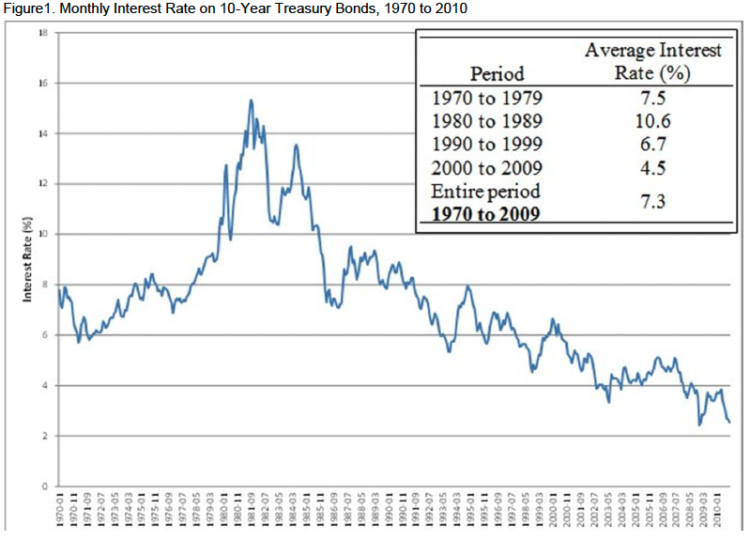 The Relationship Between Farmland Value and Earnings

While a number of different ways of describing the relationship between farmland income and farmland prices have been developed, the value to income multiple or price to earnings (P/E) ratio is one of the most common. The P/E ratio describes how much buyers are willing to pay for each dollar of income. As a matter of convenience, earnings (E) are usually estimated as either the most recent level of income, the income forecast for the upcoming year, or the current or expected future cash rent.

Thus, the income multiple is the inverse of the capitalization rate.

If the risk premium and income growth rate remain constant, a decline in the long-term interest rate decreases the capitalization rate and increases the associated earnings multiple and farmland value. One must also consider how the risk premium that investors associate with farmland has changed as well. Lower capitalization rates, and higher multiples, could also be achieved by investors requiring a smaller risk premium or by expecting a higher rate of growth in farm income.

The relationship between the 10-year Treasury rate, the growth rate, and risk premium is illustrated in Table 1. The cash rent multiple for average quality Indiana farmland is shown for selected years. The average annual interest rate on the 10-year U.S. Treasury is used as a proxy for the long-term return and is shown in the next column. 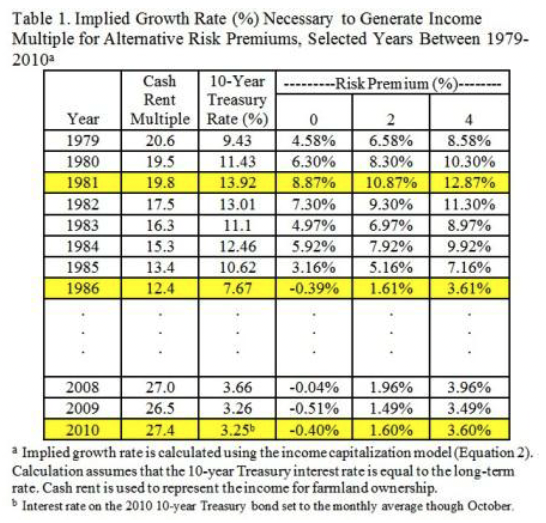 The subsequent columns show the implied growth rate in income necessary to generate the income multiple under alternative assumptions about the risk premium.

For example, in 1981 the cash rent multiple was 19.8. Given the 10-year Treasury rate of 13.92%, if investors require a risk premium of 2%, the implied annual growth rate in income is 10.87%. While inflation rates were high at that time, a long-lasting growth rate of over 10% for farmland income turned out to be much too optimistic. By the time the downward adjustment in farmland values was complete in 1987, the needed annual increase in farmland income with a 2% risk premium had declined to 1.61%. 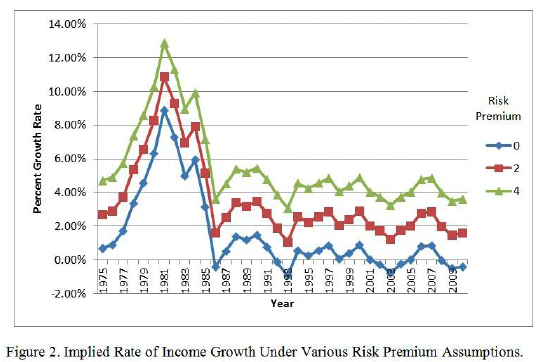 In 2010, the current combination of interest rates on 10-year Treasury bonds, a 2% risk premium, and farmland values for average land in Indiana results in an implied growth rate of 1.6%, nearly the same as 1986. However, with the increased variability in income, it is expected that the risk premium for many investors, especially the owner-operator investor, has increased. If there is a risk premium of 4% in the market, a growth rate of 3.6% is required to justify the current farmland value/income relationship.

At the March meeting of the Indiana Society of Farm Managers and Rural Appraisers, attendees were asked to estimate the current value of 80 acres with long-term corn and soybean yields of 165 and 50 bushels per acre, respectively. The average value for such a tract was $6,028 per acre. The attendees were also asked to estimate the current cash rent. The average cash rent was $208 per acre. This would provide a current income multiple of 30.

Given a10-year Treasury rate of 3.25%, a cash rent multiple of this size implies an income growth rate of 1.93%. Will these expectations about continued low interest rates, strong income, and moderate income growth rates be realized?

Expected farmland earnings, interest rates, risk premiums, and farmland income growth rates have all been favorable in recent times. Crop income has been larger than historical averages and growing faster than historical rates due to increased demand for bio-fuels, export demand growth from developing countries, and a weaker dollar. While it is difficult to forecast the effect of these variables on crop prices in the future, it appears that at least in the area of biofuels, the massive demand expansion is likely to moderate. Current farmland income is also likely to decline because of increases in crop production costs.