During 2018, changes in the retail price of food at home have remained low, averaging just 0.5% year- over-year growth over the past five years and 0.4% year-over-year growth thus far through 2018 according to data from the Bureau of Labor Statistics. Inflation of food prices away from home, by contrast is higher, but has remained fairly stable over time at about 2.6% year-over-year increases. Since 2016, prices of food at home have grown much more slowly than overall prices in the economy, implying food at home is becoming cheaper in real terms. Since 2017, changes in prices of food away from home have been at about the same level as price changes in the rest of the economy.

The U.S. Department of Agriculture, Economic Research Service (ERS) projects annual food price inflation, for combined food at home and away from home, of between 0.75% and 1.75% for the year 2018, increasing to 1.5% to 2.5% for 2019. In 2018, low agricultural commodity prices helped keep downward pressure on food price inflation. Several commodities, such as pork, dairy, and processed fruits and vegetables experienced overall price declines, or deflation, over 2018. A few commodities have experienced more significant retail price increases over 2018, including beef (expected to increase about 1.75%) and eggs (expected to increase more than 9% from 2017 to 2018).

Even for food consumed at home, consumers are changing their purchasing habits. Two decades ago, 71% of food for at-home consumption was bought at grocery stores; today the figure is only 58%. Consumers have shifted food purchases away from grocery stores toward warehouses clubs and superstores. For food away from home, there has been a slight shift toward more food spending at limited-service restaurants over the past two decades, but overall the share of meal spending at full service restaurants compared to other outlets has remained steady at about 36% of all food away from home spending. 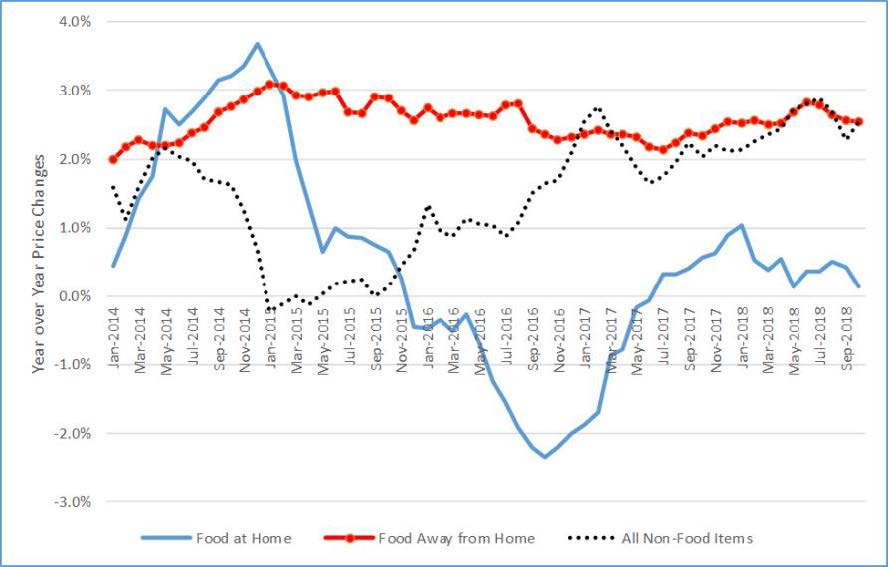