Producer sentiment inched higher during April as the Ag Economy Barometer increased to 130. The latest result for the Purdue/CME Group Ag Economy Barometer, which is based on a monthly survey of 400 U.S. agricultural producers, was slightly higher than March’s 124 reading, but still well below January’s peak of 153 (Figure 1). When compared to a year earlier, sentiment among producers was much improved, up 23 percent in April 2017 from the April 2016 reading of 106. More broadly, agricultural producers’ sentiment since December 2016 has been notably more positive than at any other time since data collection began in October 2015. 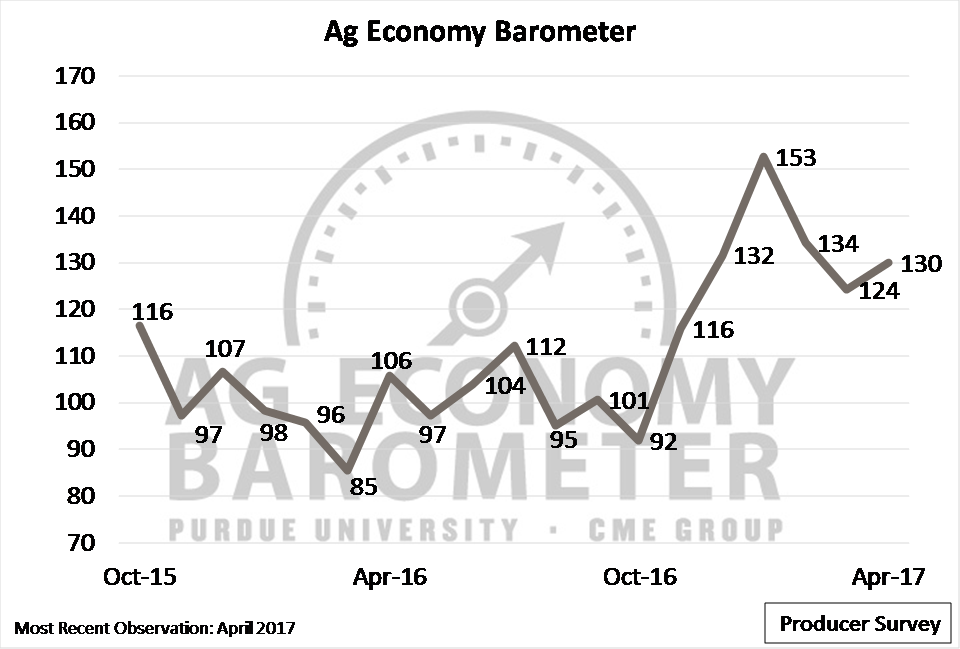 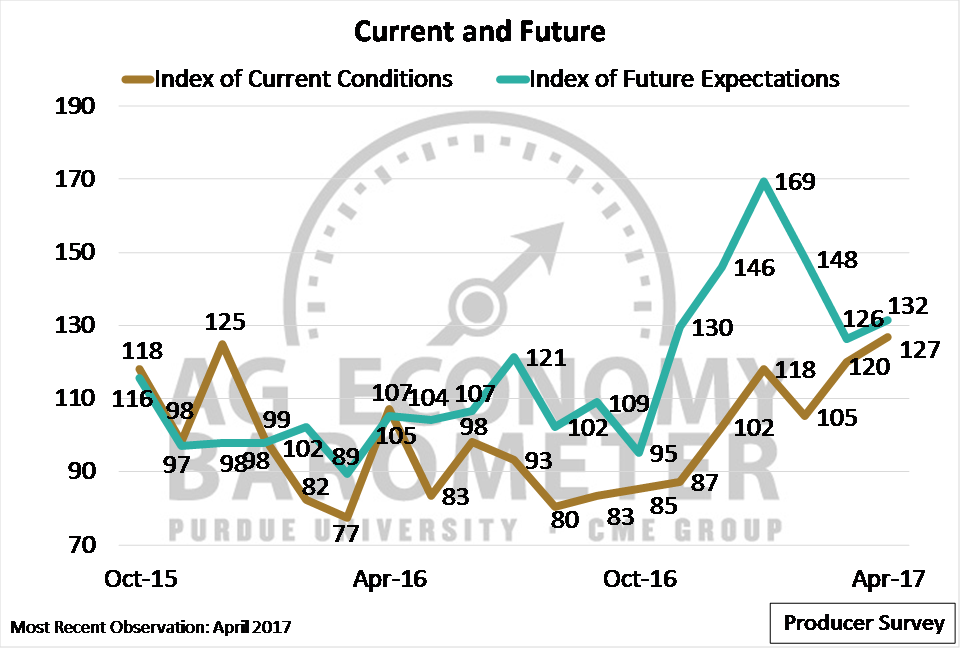 Figure 2. Index of Current Conditions and Index of Future Expectations, October 2015 to April 2017. 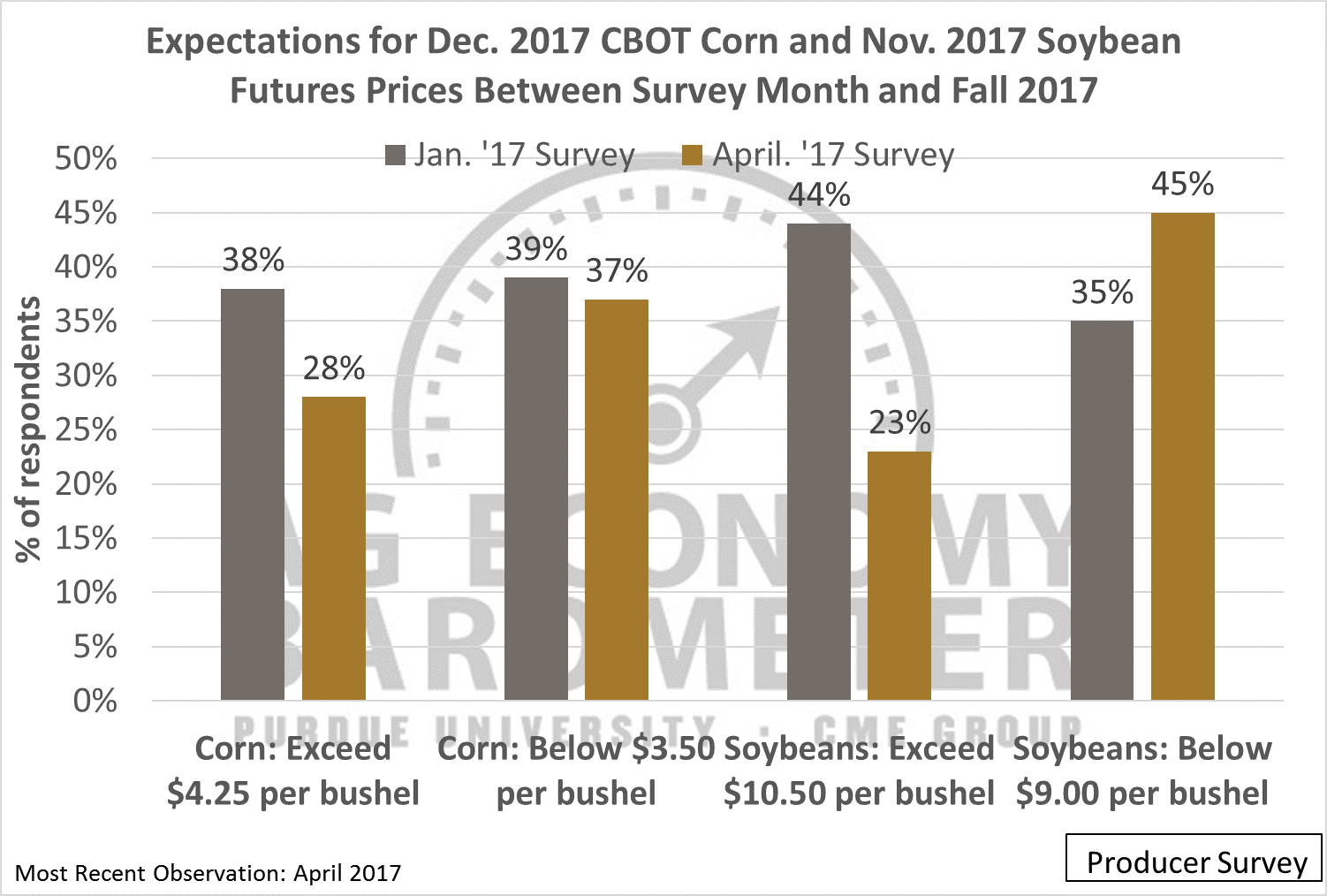 While producer sentiment has improved significantly since last fall, another measure of confidence – the willingness to make large capital investments – has changed less over that same period. Each month the survey poses the question, “Thinking about large farm investments – like buildings and machinery – generally speaking, do you think now is a good time or bad time to buy such items?” The willingness to commit to large capital expenditures might be interpreted as a measure of producers’ long-run confidence that their business will be profitable. Examining survey results back to October 2015, producer response to this question has been remarkably constant. Over the life of the survey, the range of respondents indicating it was a bad time for large farm investments ranged from a low of 60 percent (December 2015) to a high of 78 percent (March 2016). However, since April 2016, this figure has been in a 10-point range of 63 to 73 percent. Since November 2016, when the barometer readings started increasing, this sentiment gauge has improved from a reading of 73 in October 2016 to 65 in April 2017 (Figure 4). The improvement parallels the change in the barometer, but suggests that the shift in buying/investment behavior is more muted than the change in overall sentiment measured by the barometer. 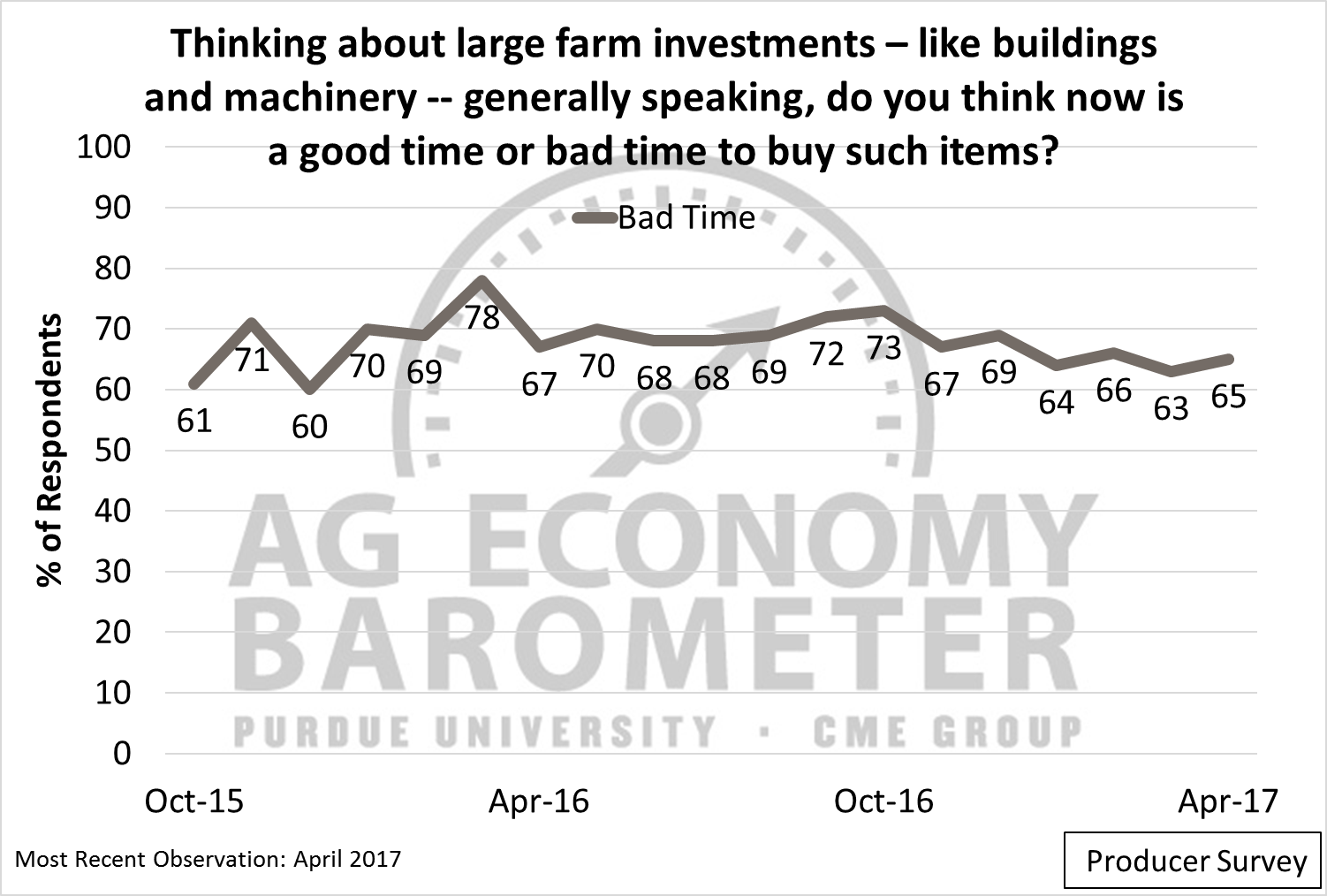 Figure 4. Share of producers reporting it’s a “bad time” to buy large farm investments, such as buildings and machinery. October 2015 to April 2017.

A second question about machinery regularly included on the survey focuses on producers’ perceptions regarding used farm machinery prices. This question, which is posed on a quarterly basis, reveals that a majority of producers have consistently rated used farm machinery prices as “high” (a rating of 6 to 9 on a 9-point Likert Scale). In recent months, there has been a slight increase in the share of respondents rating prices as low (a rating of 1-4). However, compared to a year earlier, the April 2017 survey results indicate that more producers think used machinery prices are low and fewer producers think used machinery values are high.

Finally, the April survey featured a new question that asked producers’ expectation for used farm machinery prices over the upcoming 12 months (Figure 5). While the majority (61 percent) expected prices to remain “about the same,” a larger share of respondents expected higher prices (24 percent) than expected lower prices (16 percent) in 12 months. 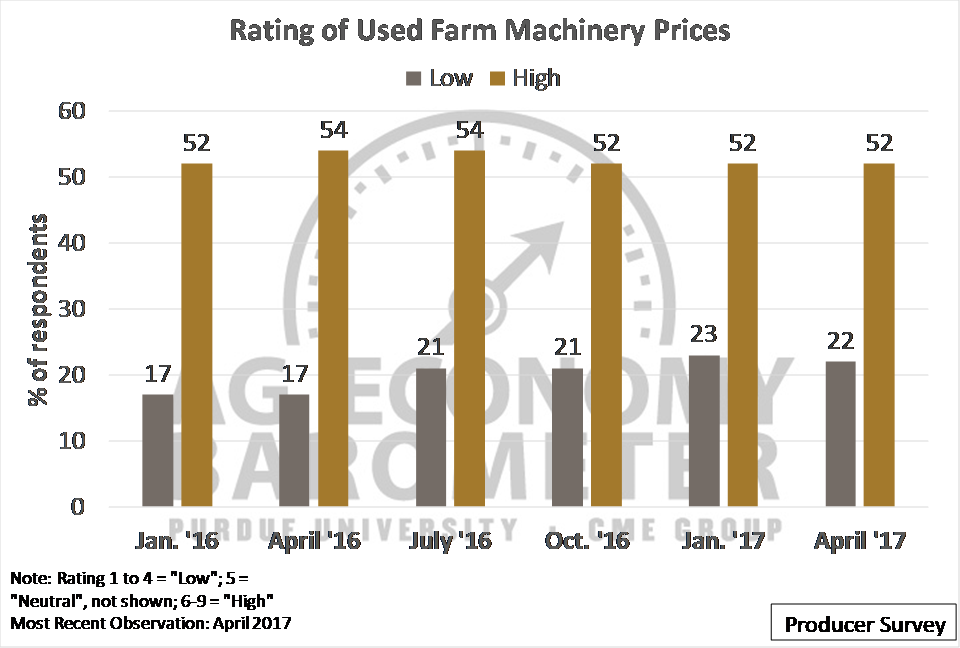 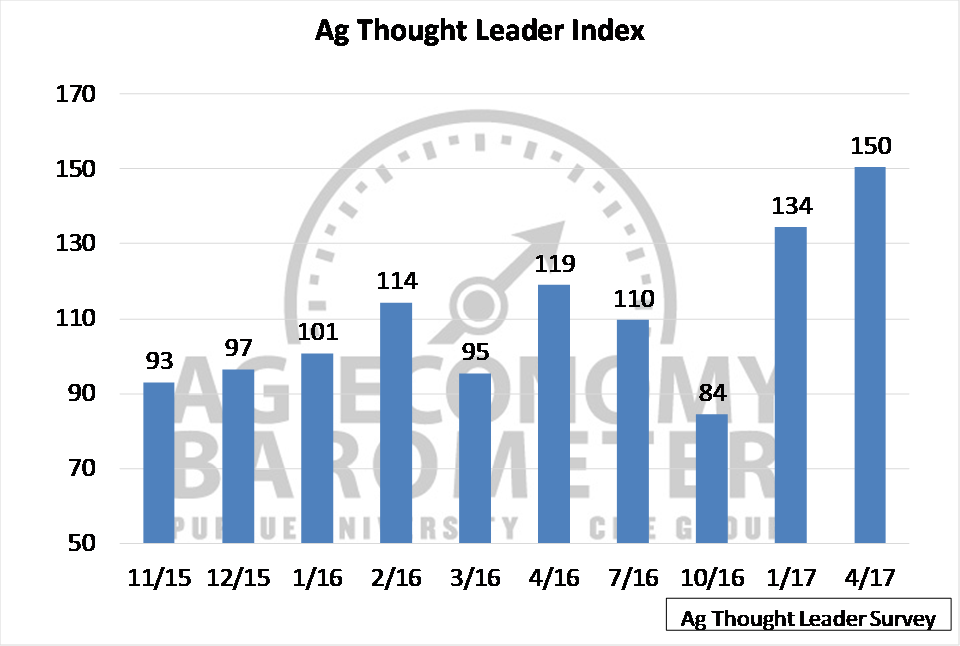 Despite the improvement in sentiment from January to April, the agricultural thought leader group indicated that they are less optimistic about both corn and soybean prices than they were back in January. Similar to the agricultural producer survey, thought leaders were asked about their expectations regarding the future direction of new-crop corn and soybean futures prices (Figure 7). The biggest shift was in soybean-price expectations. The percentage of thought leaders expecting new-crop soybean futures to exceed $10.50 per bushel declined by more than half since January and the percentage of respondents that expect November 2017 soybean futures to drop below $9 per bushel between the survey date increased from 51 percent to 74 percent over the same time period. 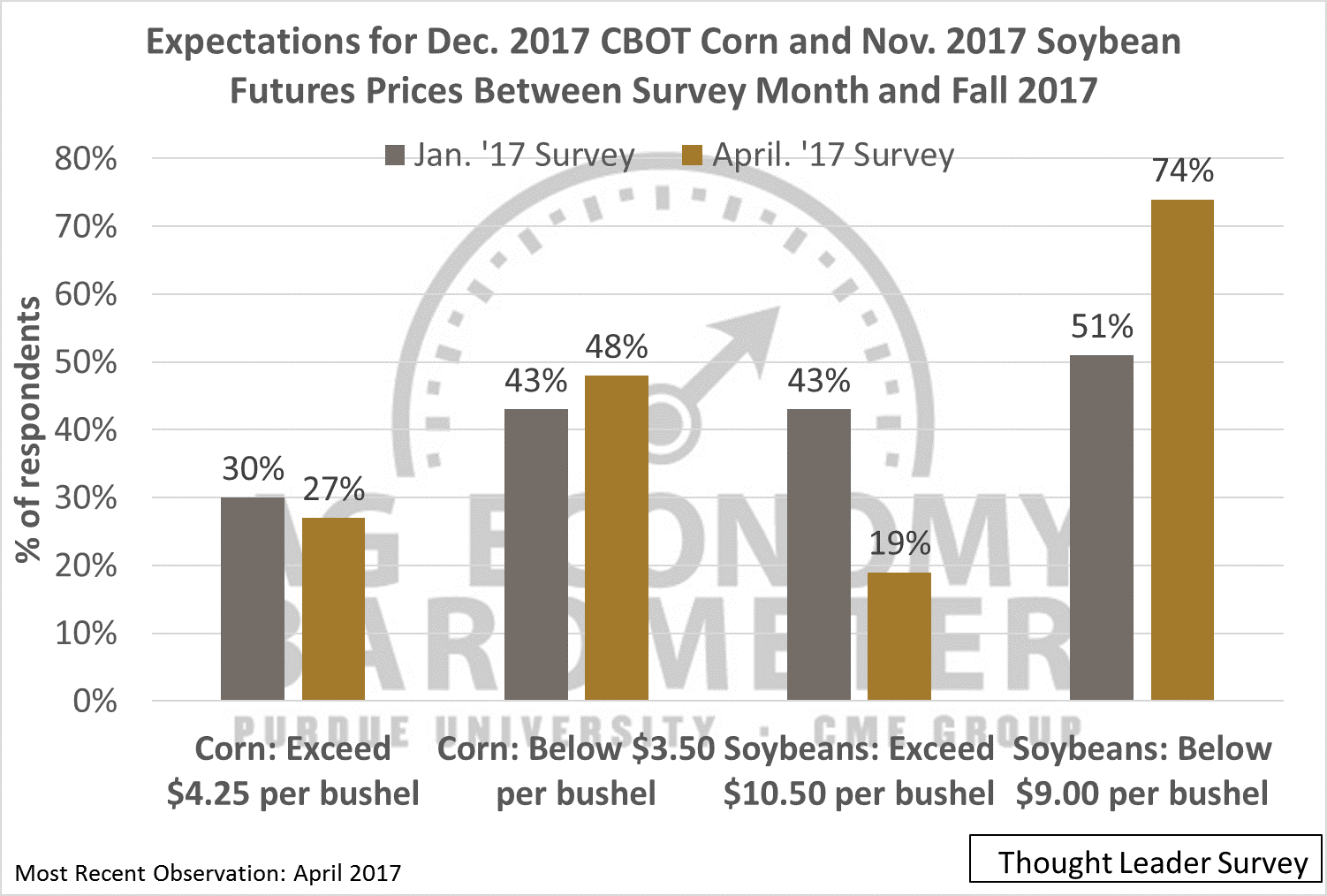 Sentiment among agricultural producers improved modestly in April compared to a month earlier. Agricultural thought leaders also indicated that they have a more optimistic perspective on the agricultural economy than the last time they were surveyed in January. The improvement in sentiment occurred despite the fact that crop-price expectations among both groups were lower in April than they were back in January. Survey results continue to suggest that both producer and thought-leader optimism is rooted in more than expectations for an improvement in revenues.