The dramatic improvement in ag producers’ sentiment that started following the November election continued into the new year. The Purdue/CME Group Ag Economy Barometer—based on a monthly survey of 400 agricultural producers from across the U.S.—reached 153 in January 2017, 21 points higher than December’s survey and 61 points higher than in October (Figure 1). Ag producers’ sentiment in January was not only the most positive recorded in the Ag Economy Barometer’s history, but it was also the biggest month-to-month sentiment change since data collection began in October 2015. 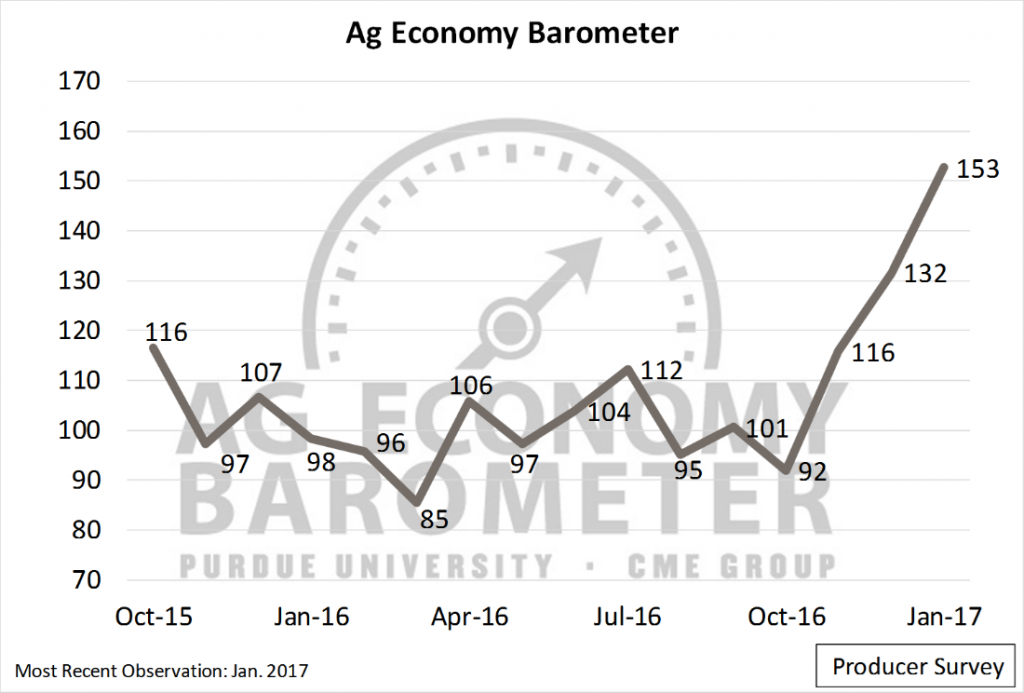 The largest contributor to the sharp uptick in optimism since October has been producers’ increasingly favorable expectations regarding the future. This was again the case in January as the Index of Future Expectations reached 169—23 points higher than a month earlier (Figure 2). But it’s worth noting that producers’ optimism was also supported by a perceived improvement in current agricultural sector conditions as the measure of producers’ current sentiment—the Index of Current Conditions—rose during January to a reading of 118, up from 102 in December 2016.

Some of the improvement in producers’ perceptions of current conditions was motivated by improvements in commodity prices. Prices for key commodities, including soybeans, cattle and hogs, were increasing during much of the fall. For example, from mid-October to mid-January futures prices for CME February lean hogs increased over 30 percent, while CME February live cattle futures prices rose over 20 percent and CBOT March soybean futures prices increased more than 10 percent. 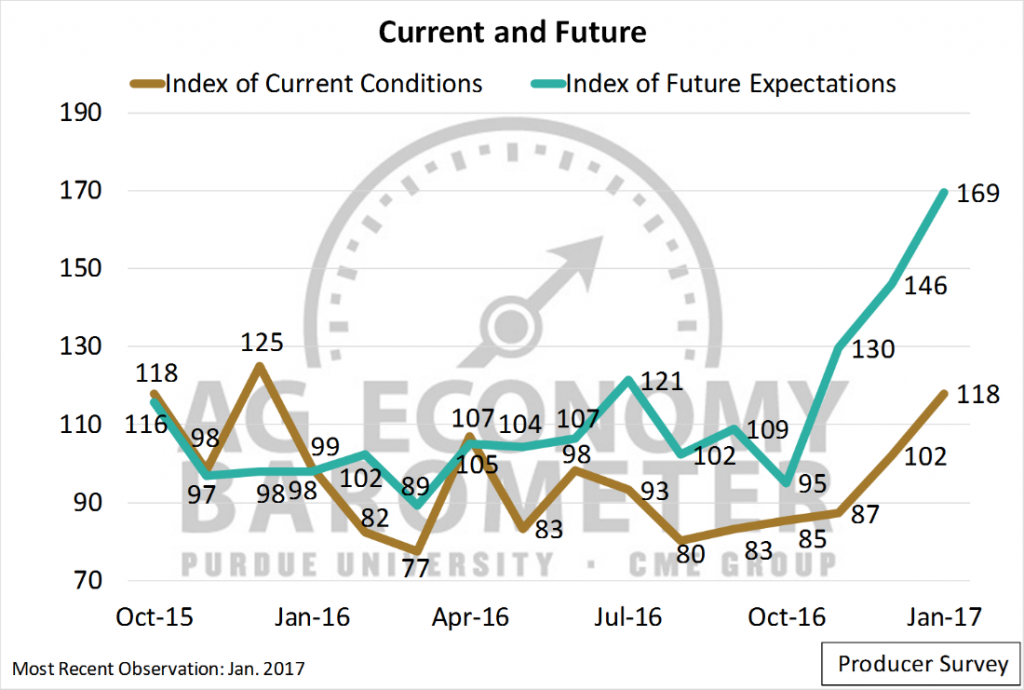 When asked to look ahead 12 months, the shift in optimism about the future among producers since October is apparent. In October, just 17 percent of producers expected conditions to improve in the year ahead (Figure 4). By January, 39 percent of respondents expected their farms’ financial conditions to improve in the year ahead, which was the most positive response provided by producers to this question since the inception of the monthly Ag Economy Barometer surveys in 2015. 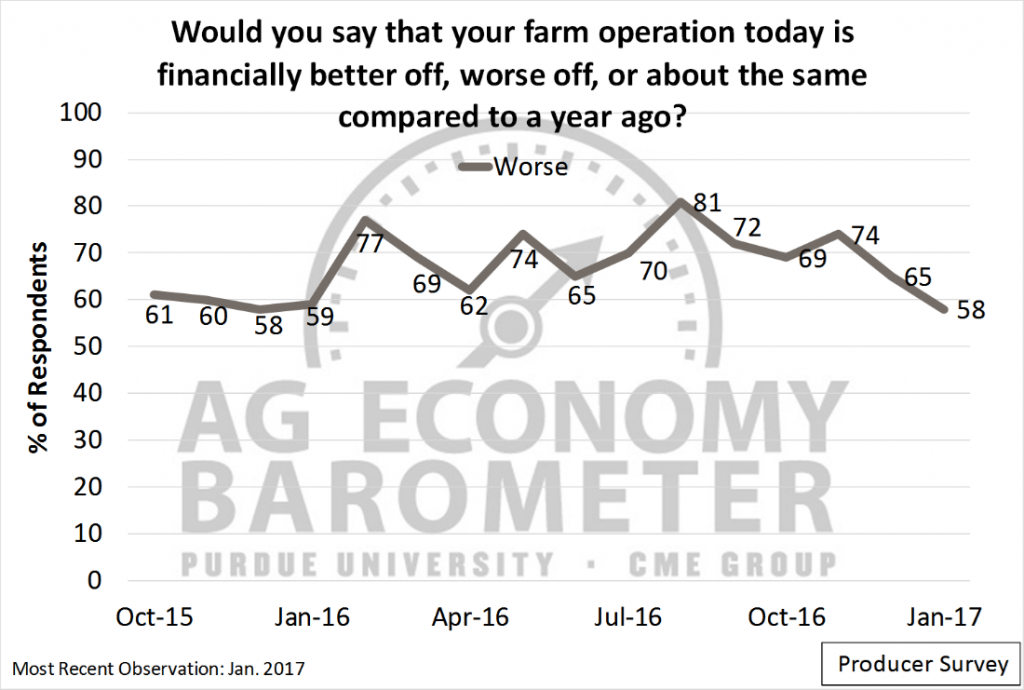 Figure 3. Share of respondents reporting their farm operations are “worse off” financially compared to a year ago. 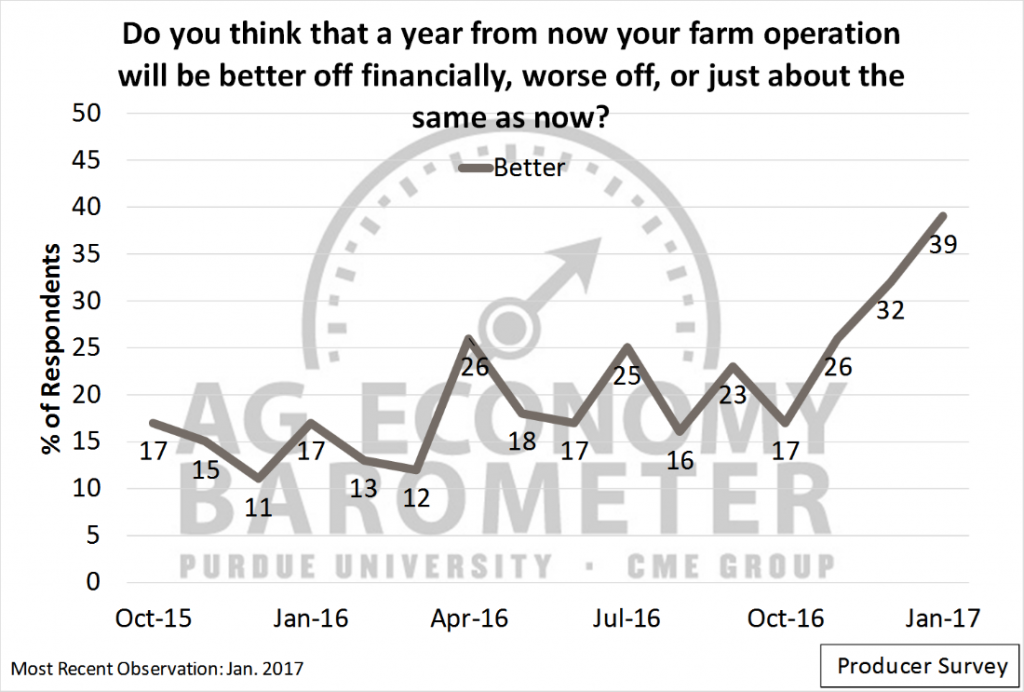 Figure 4. Share of respondents expecting their operations to be financially “better off” a year from now.

A key driver of producers’ future expectations is usually their perspective on commodity prices. However, it’s not clear that the recent uptick in producer sentiment is being motivated by expectations for stronger commodity prices in the future. When asked about corn, soybean, wheat and cotton prices 12 months ahead (January 2018), the percentage of producers expecting higher prices was, with the exception of wheat, only slightly higher than in October. There was, however, a notable difference in wheat prices expectations from October to January as one-third of respondents expected higher prices on the January survey compared to just over 20 percent in October.

Producers were also asked targeted questions about corn and soybean price expectations. Specifically, producers were asked if they believed new-crop corn and soybean futures prices would exceed or fall below given price points between January and fall 2017. The price points selected represented new futures contract lows or highs. For corn, essentially the same proportion of farmers thought new contract highs (38 percent) and new contract lows (39 percent) were possible (Figure 5). When asked about soybean prices, a larger share (44 percent) of respondents thought new contract highs were possible while only 35 percent expected to see the November 2017 contract establish a new low. 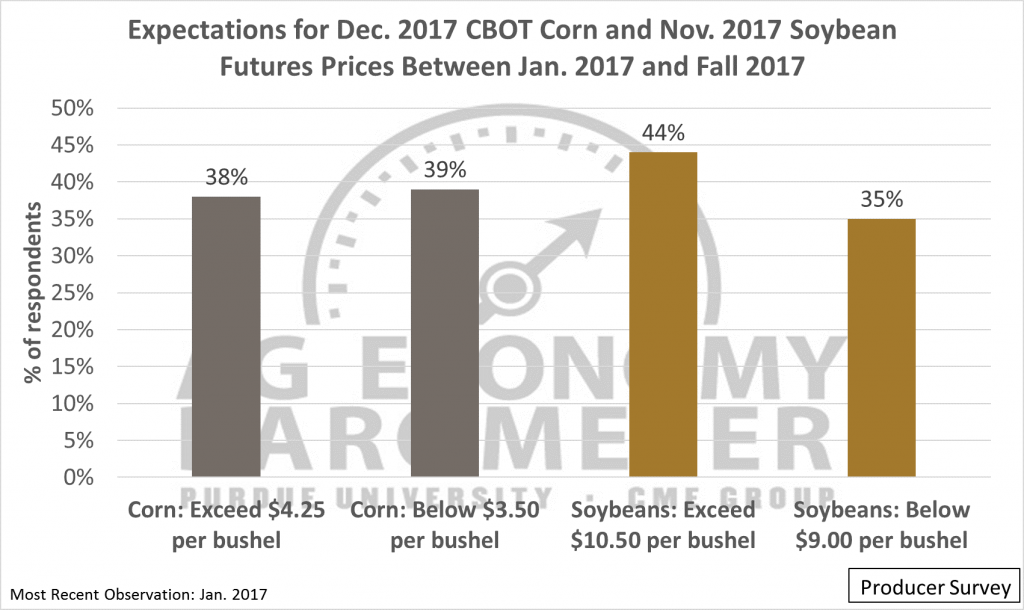 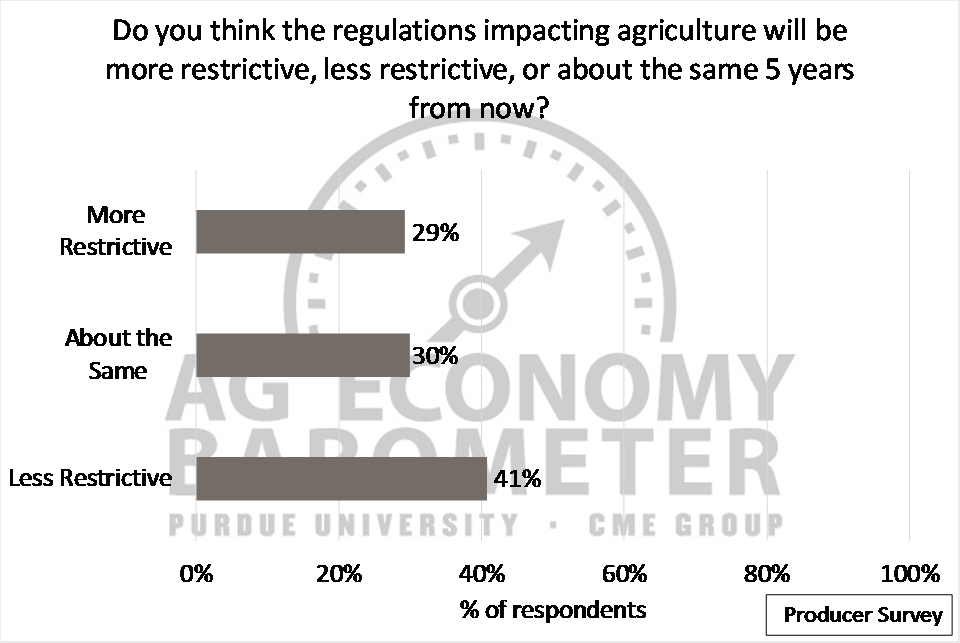 On a quarterly basis, 100 agricultural thought leaders—lenders, retailers, consultants, academics and agribusiness professionals—are surveyed to measure their expectations about the agricultural economy. Survey questions parallel those posed to agricultural producers each month making it possible to compute an Ag Thought Leader Index similar to the Ag Economy Barometer. 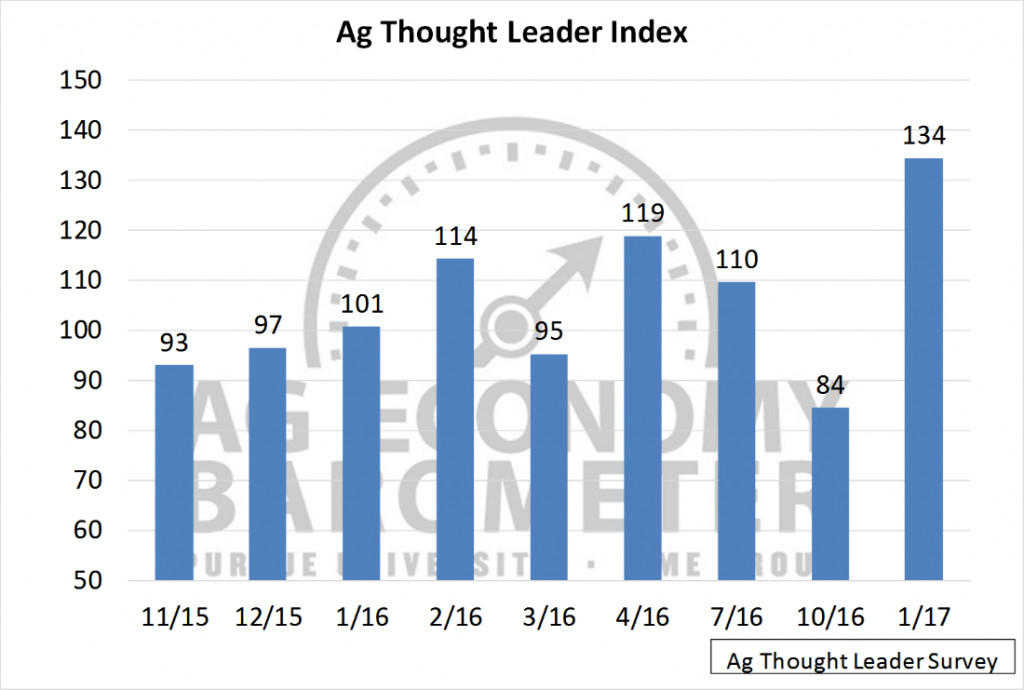 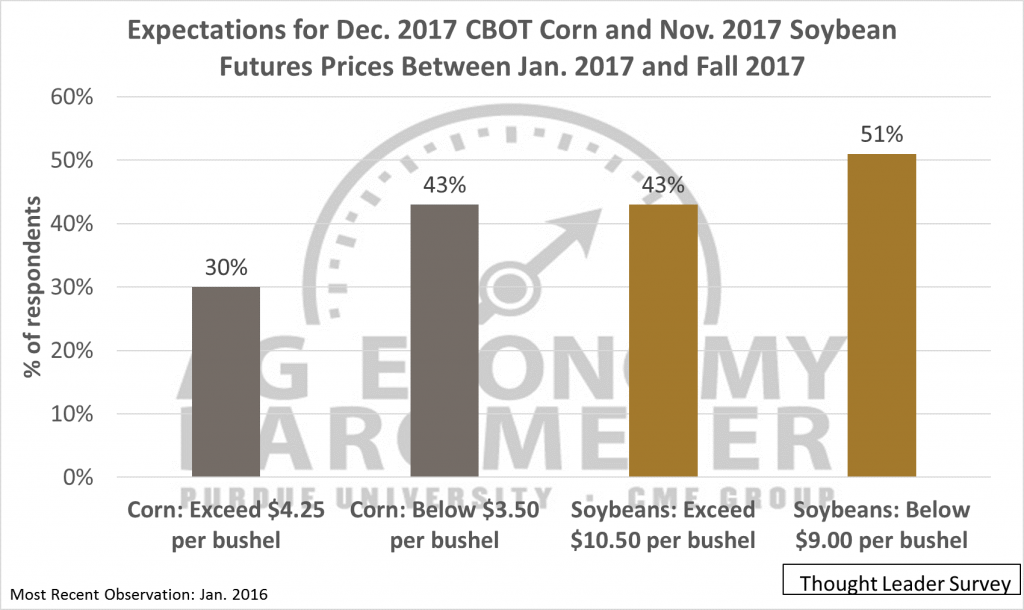 The rise in the Ag Economy Barometer during January marked the third consecutive month the barometer moved higher. Continuing a trend that got underway in November, producers indicated that they were markedly more optimistic about the future which, combined with a more modest improvement in their view of current economic conditions, pushed the barometer up yet again. The improvement in the Ag Economy Barometer is tempered by the fact that over half of the survey respondents felt that their farm operation’s financial was worse off today than a year earlier and over 60 percent of respondents expect their financial condition to be worse yet 12 months from now.