The Purdue/CME Group’s June survey of 400 U.S. agricultural producers indicates producers feel their farm operations’ financial positions are stronger now than a year ago (Figure 1). This shift in producers’ perspective is one reason why the Ag Economy Barometer’s June reading of 131 was virtually unchanged from a month earlier (Figure 2). The Ag Economy Barometer, a producer-based sentiment index, has held steady for three months in a row and remains well above levels recorded prior to November 2016.

The shift in producers’ perspectives regarding their financial positions is part of a long-term trend. In June 2016, just 3 percent of survey respondents felt their operations were financially better off than a year earlier. That percentage increased to 10 percent last fall, then declined somewhat in early winter before rebounding to its current reading of 13 percent, the highest reading since we began surveying producers in October 2015. A similar pattern emerges when examining the percentage of producers indicating their farms’ financial positions declined compared to 12 months prior. The percentage of farmers indicating that their financial positions were worse than a year earlier was 46 percent in June 2017, little changed from May’s 44 percent, but well below the 67 percent recorded as recently as February. The shift in perspective compared to last summer is even more noticeable as 81 percent of respondents in August 2016 said their farm was financially worse off than in the prior year.

The long-term shift in producers’ attitudes about their operations’ financial conditions is likely reflective of several factors. First, revenues on many farms increased as a result of record, or near record, crop yields in 2016. The revenue improvement was further supported by the fact that corn and soybean futures prices strengthened from late summer through early winter. Second, production costs moderated for most crop operations compared to the prior year. Fertilizer prices in particular were weaker than a year earlier, helping to improve margins. Third, as the long-term adjustment to tighter crop operating margins continues, farmland rental rates continue to adjust downward, helping to brighten the financial picture for many farm operations. 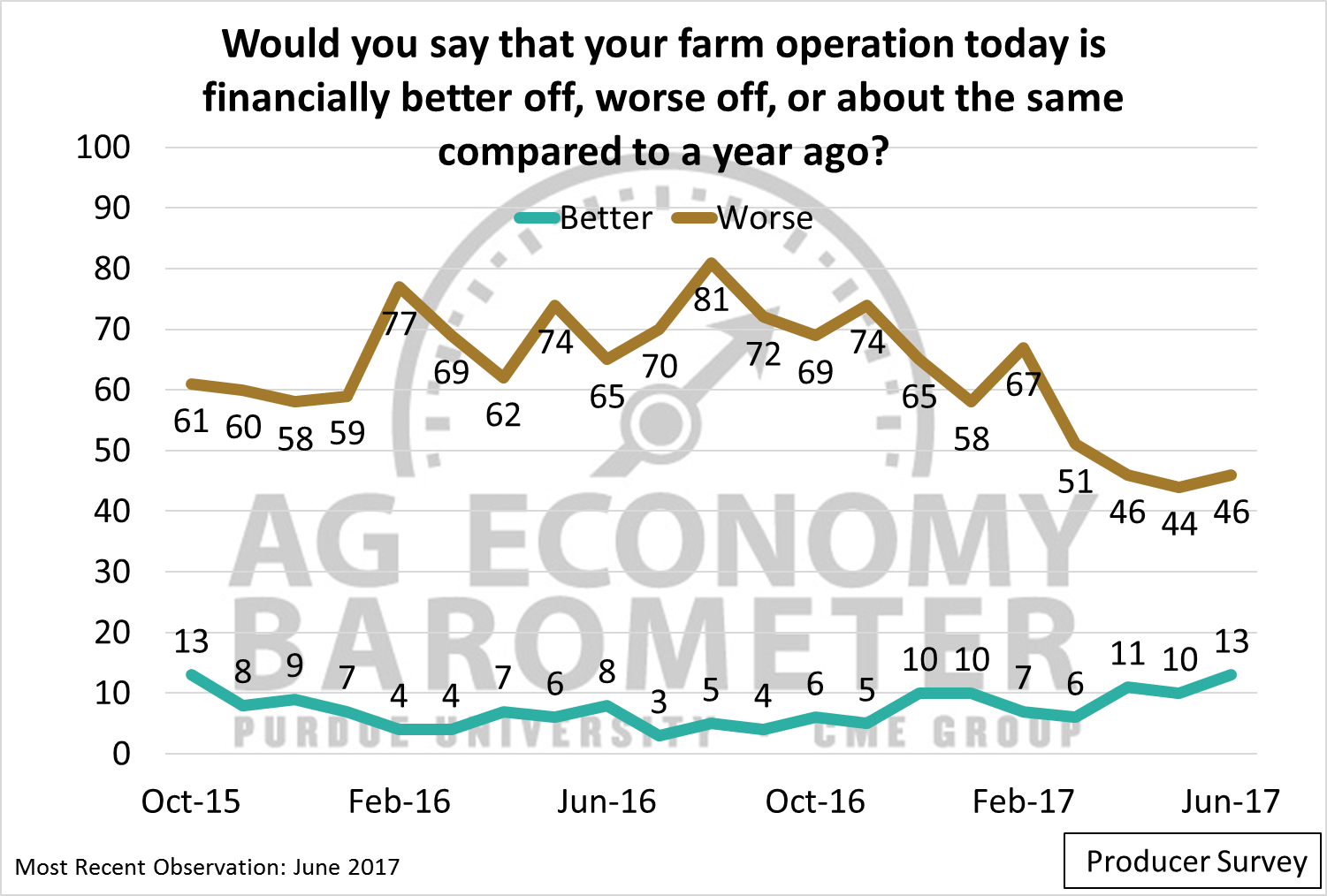 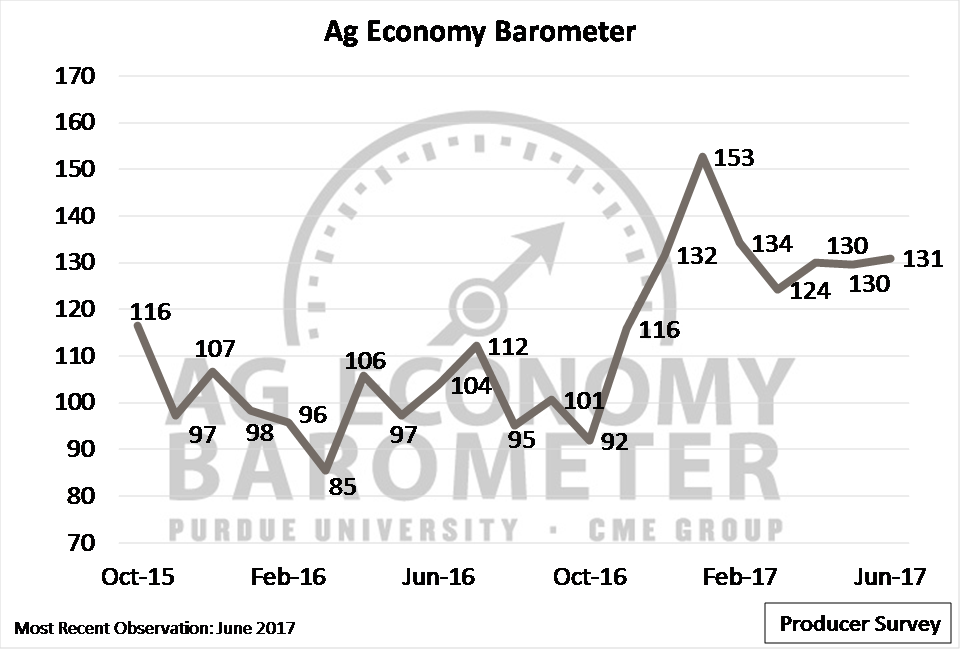 In addition to the monthly questions measuring sentiment, the barometer survey also asks producers about the key drivers affecting their farms and the broad farm economy. On the June survey, producers were asked to compare current expectations about their farm financial performance in 2017 to their initial budgets or plans (Figure 3). Most producers (60 percent) indicated that current expectations are “about the same” as their initial expectations. However, for farm operations whose expectations changed, a turn towards “worse than” planned (28 percent) was more common than ‘better than’ budgeted (12 percent). Respondents indicating they expect their 2017 financial performance will be worse than originally planned could be reflective of the difficulties some farms have experienced this spring with respect to planting and poor growing conditions, especially in the Eastern Corn Belt. 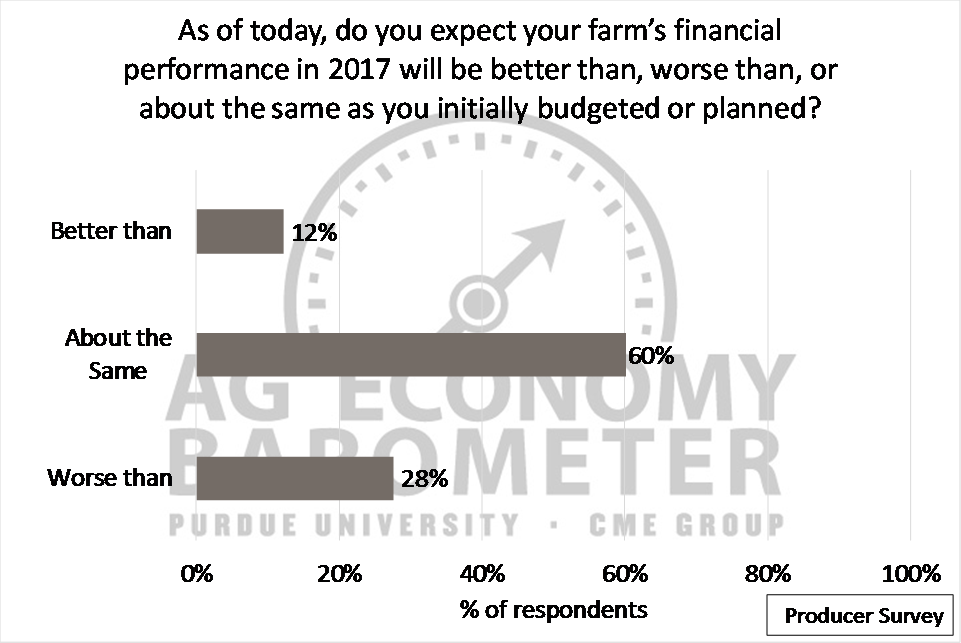 One of the challenges producers faced this spring has been an oscillation from cool/wet periods to hot/dry spells. While weather-related challenges were part of what was captured in Figure 3, respondents were also asked more specifically about extreme weather conditions. Compared to previous surveys there was an uptick in the share of respondents rating it likely that extreme weather events would have widespread, adverse impacts on crop yields over the next 12 months (Figure 4). Interestingly, the June 2017 survey was the first time a majority of producers (52 percent) indicated they expected extreme weather events to impact crop yields. 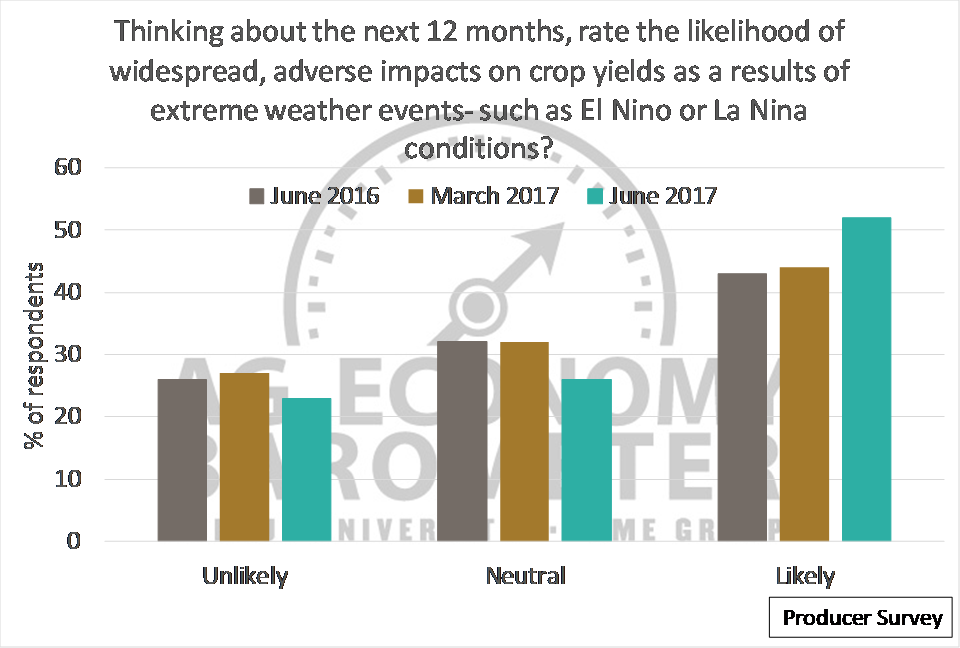 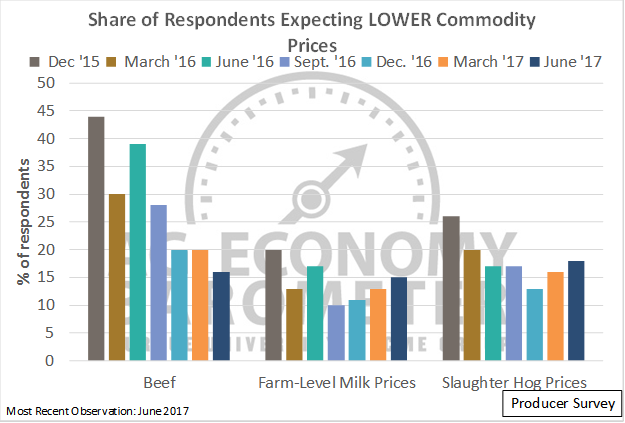 A theme observed in late 2016 and throughout 2017 is an expectation that the business climate for agriculture will improve. Previous surveys revealed that producers are more optimistic about the broad U.S. economy than prior to November 2016, forty percent of producers expect a more favorable regulatory environment in the upcoming five years, and a majority of survey respondents think efforts to renegotiate the North American Free Trade Agreement (NAFTA) will prove beneficial to U.S. farmers. In this month’s survey, producers were asked about their expectations regarding expected changes in taxation to learn whether that is one of the drivers behind their outlook for an improved business climate.

When asked about the taxes affecting agriculture 12 months from now, 18 percent of producers expect taxes to decline, whereas 30 percent of respondents actually expect taxes to increase (Figure 6). However, the majority of respondents (52 percent) expect taxes to be about the same as they are today. One way of summarizing the responses is to say that 70 percent of producers expect the taxes they face to be about the same or possibly decline in the next 12 months. When the question was repeated, but over a five-year time horizon instead of 12 months, the share of producers expecting lower taxes remained the same (18 percent), but producers expecting taxes to be “about the same” fell and those expecting higher taxes increased to 52 percent. Unfortunately, we don’t have a baseline we can use to help evaluate the June survey responses. Having said that, the fact that nearly one-fifth of the survey respondents expect taxes to decline in both the short-run and longer-run suggests that an expectation for a more favorable tax environment is one of the drivers behind the improvement in producer sentiment since last October. 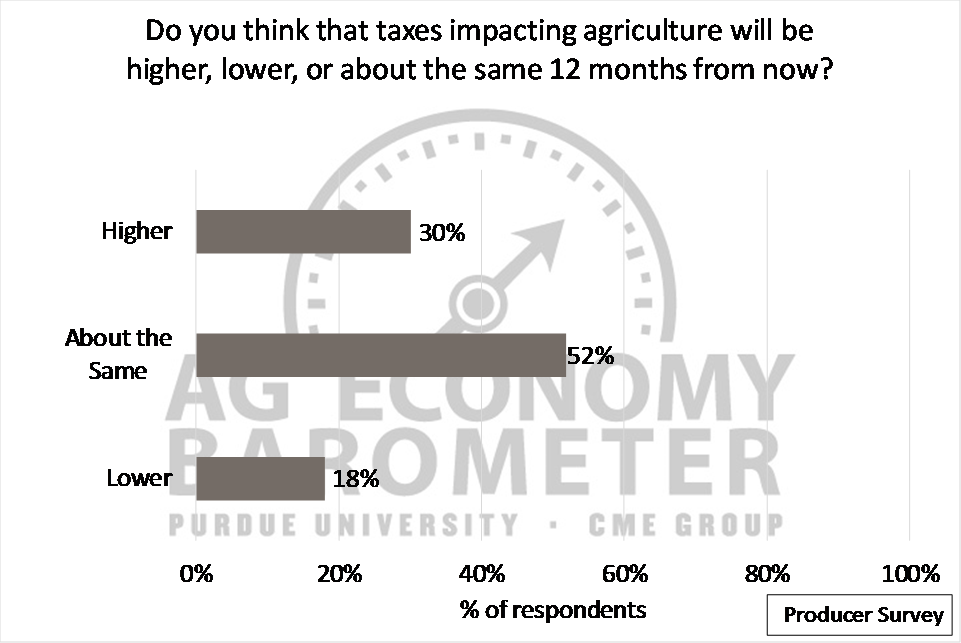 U.S. agricultural producers’ sentiment regarding their financial positions has improved significantly over the last year and producers remain noticeably more optimistic about the agricultural economy than they were last fall prior to the November election. Barometer survey responses over the last year suggest that the financial situation for many farm operations has stabilized. However, a relatively large minority (28 percent) of producers indicated they now expect their farms’ 2017 financial performance to be worse than they projected earlier in the year. Recent declines in corn and soybean prices, coupled with adverse planting and growing conditions in the Eastern Corn Belt this spring, are likely reasons why concerns about 2017 surfaced. Finally, there is still some expectation that policy changes will lead to an improved business climate as evidenced by the nearly one-fifth of survey respondents that expect taxes to decline over both the next 12 months and the next five years.