The Purdue University/CME Group Ag Economy Barometer indicated that farmer sentiment improved modestly during September as fall harvest got under way across most of the U.S. Based on a monthly survey of 400 agricultural producers, the Ag Economy Barometer was at 101 in September (Figure 1). While this was moderately above the August value of 95, the barometer’s current reading remains well below its peak of 112 in July. 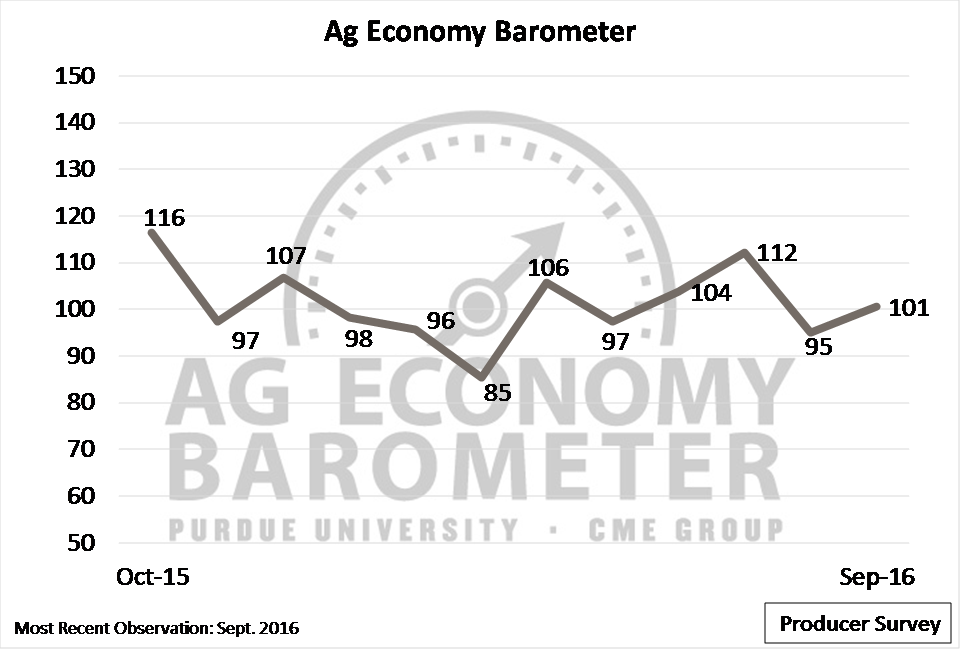 The Ag Economy Barometer’s two sub-indices, the Index of Current Conditions and Index of Future Expectations, provide a more detailed view of what is driving farmer sentiment (Figure 2). While both indices increased in September compared to August, it is interesting to note how producers’ views of current conditions versus future expectations diverged over the summer. The Index of Future Expectations, at 109 in September, was well above the base period value (value of 100 established from October 2015 to March 2016), and is the second-highest reading observed since the start of the 2016 crop-growing season in April. On the other hand, the Index of Current Conditions reading of 83 was well below the base-period average of 100 and was the fourth-lowest value since data collection began in fall 2015. Agricultural producers are pessimistic about current conditions in agriculture, but continue to express some optimism regarding future economic prospects. 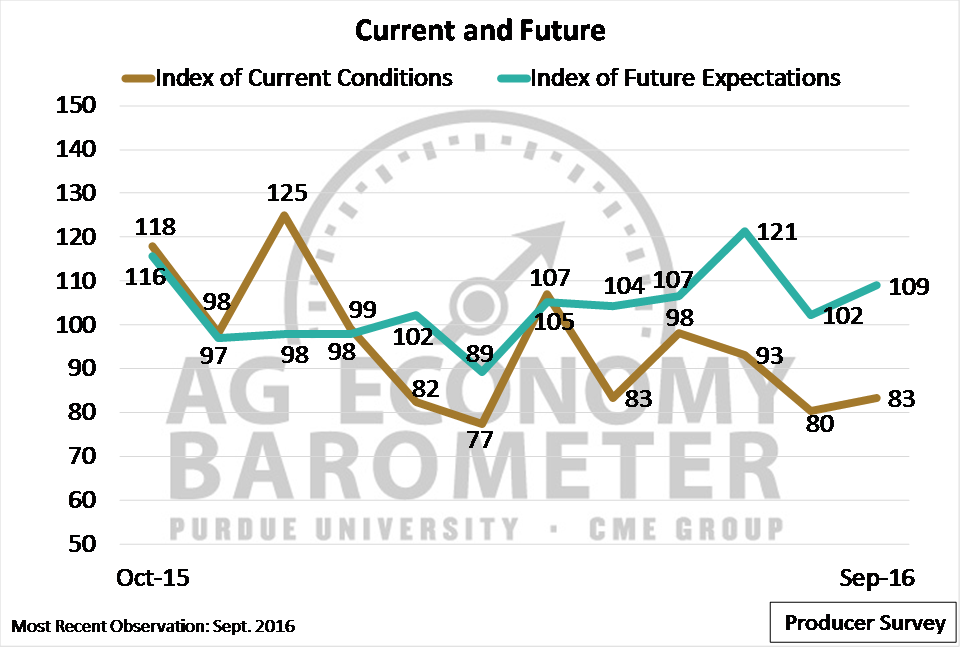 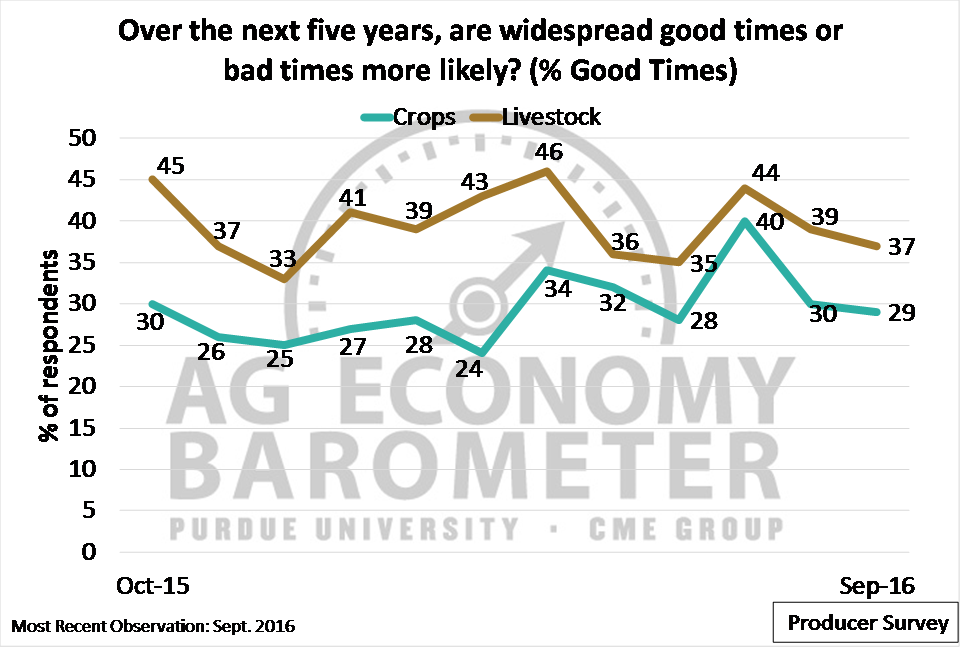 Although expectations for long-term profitability in livestock declined among producers surveyed in September, their perspective on two key short-run indicators for livestock profitability improved. Producers are surveyed quarterly regarding their expectations for beef cattle, farm-level milk, and slaughter hog prices. Figure 4 tracks the share of respondents expecting lower prices for these commodities on surveys going back to December 2015. In particular, fewer survey respondents expect lower prices for beef cattle and milk than at any time in the last year. The September survey also revealed that fewer producers expect higher, and more producers expect lower, animal-feed ingredient prices than on the June survey (Figure 5). 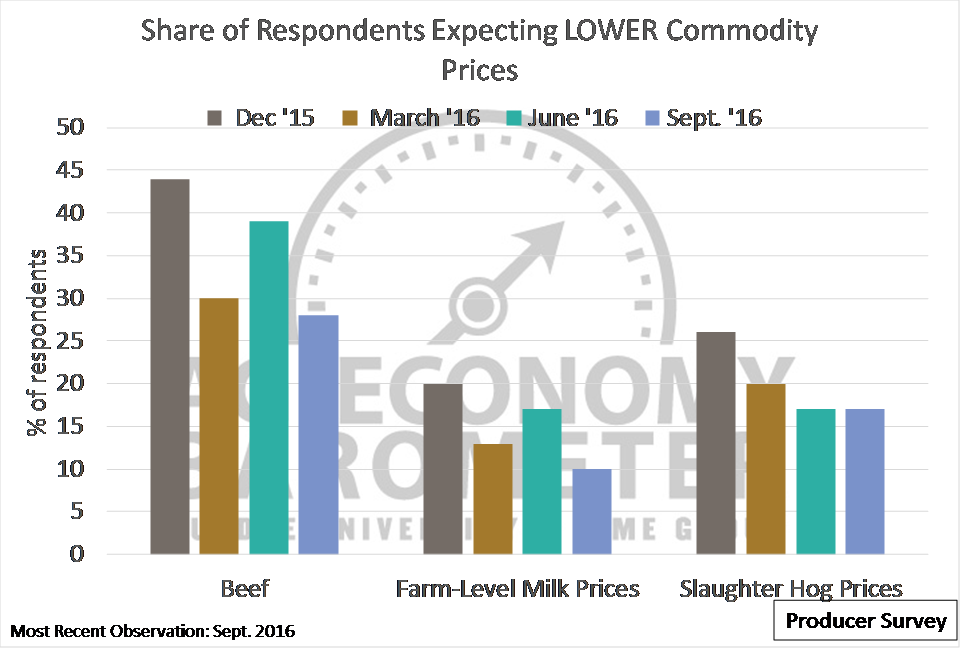 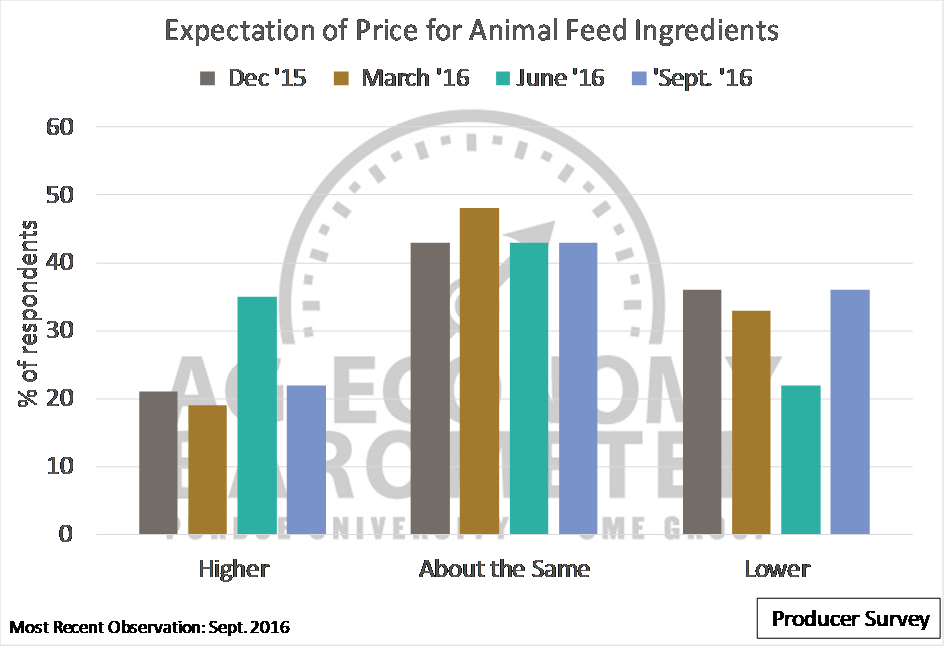 USDA’s crop production estimates indicate record-large corn and soybean crops will be harvested this fall. The September Ag Economy Barometer survey asked producers how much of their 2016 crop has been priced or sold compared to a typical year. Producers indicated throughout 2016 that they’ve been less aggressive than usual in pricing the 2016 crop, but responses on the September survey were a departure from surveys earlier in the year (Figure 6). More than 40 percent of producers in the survey said that a smaller portion of this year’s crop was priced compared to a typical year. These results suggest not only that demand for storage this fall will be very strong, but that producers expect positive storage returns for their fall 2016 crops. 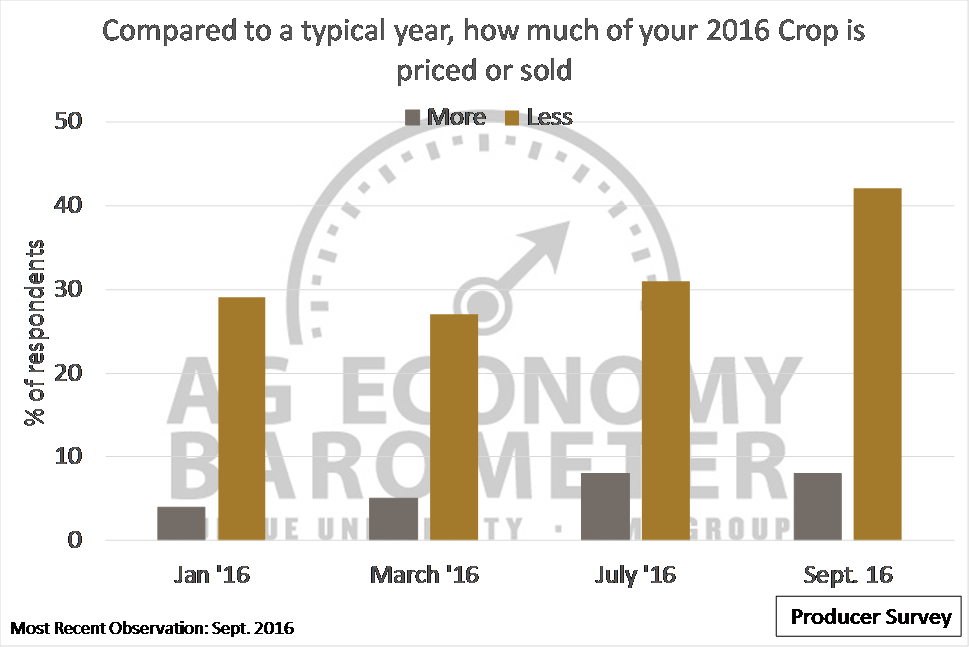 Figure 6. Respondents’ Indication Regarding How Much of the 2016 Crop is Priced or Sold Compared to a Typical Year.

Farmer sentiment improved during September as the fall harvest started, but the Ag Economy Barometer remained well below its early summer reading. Agricultural producers are pessimistic about current conditions, but express optimism about future economic conditions in agriculture. Over the course of the next year, producers are a bit more optimistic about the future direction of prices for livestock and livestock products, especially beef cattle and milk, than at any time in the last year. Finally, the September survey indicates producers have a larger portion of their 2016 crop production unpriced than what is typical at this time of year, suggesting an expectation for positive crop storage returns among producers.