Following a series of declines in the Purdue University-CME Group Ag Economy Barometer from October through March, the April reading of the barometer improved sharply. The index (Figure 1) improved from 85 in March to 106 in April, a reading that was just slightly below its December 2015 level. The Ag Economy Barometer, based on a monthly survey of 400 agricultural producers from across the U.S., measures producer sentiment and opinions regarding the health of the agricultural economy by posing a set of five standard questions and using producer responses to calculate the index. (Click here for more about how the Ag Economy Barometer is calculated)

Digging into the components of the Ag Economy Barometer, producers’ overall outlook toward both current and future conditions improved (Figure 2). But the largest improvement in the barometer came from questions used to compute an Index of Current Conditions. That index jumped from 77 in March to 107 in April. Recent events, especially in crop agriculture, appear to be driving the improvement in the Ag Economy Barometer. 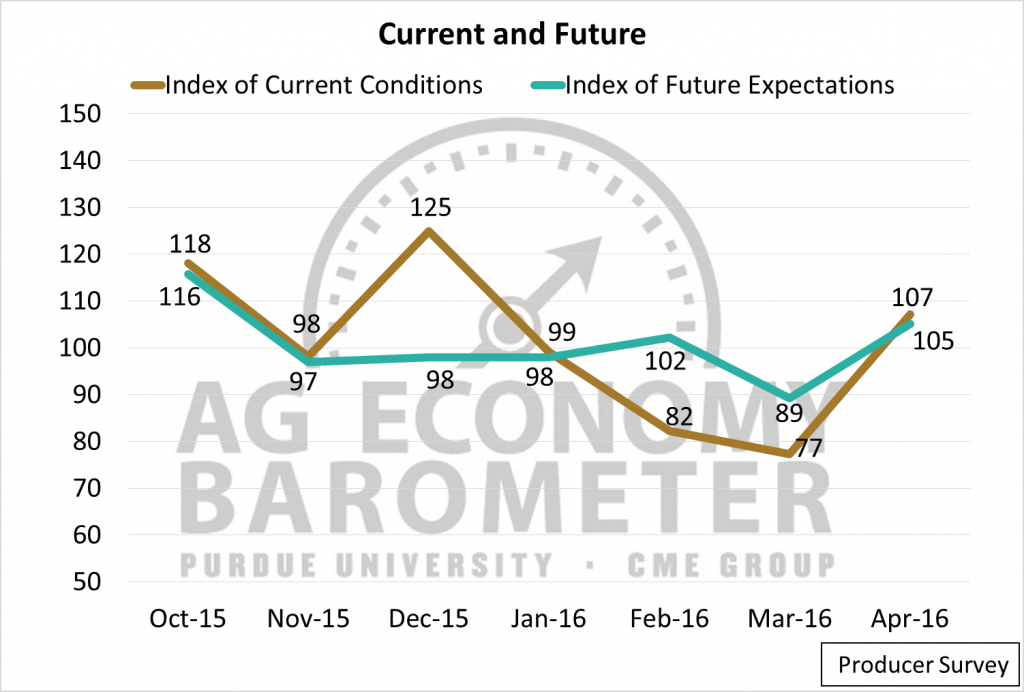 The shift in the Ag Economy Barometer during April appears to have been driven in part by changes in corn, soybean and wheat prices. After several months of trending lower, and a sharp decline in corn prices following release of USDA’s March Prospective Plantings report, corn, soybean and wheat prices all increased during April. For example, July corn futures prices rose to levels last seen in early November 2015 and soybean futures prices increased by approximately $1 per bushel from early April to mid-month when the survey was conducted (Figure 3).

During the winter, lower trending commodity prices weighed heavily on producers’ expectations regarding future crop prices. When asked if prices would be higher, lower, or about the same in twelve months, those reporting lower price expectations for major crops (corn, soybeans, wheat, and cotton) peaked in March (Figure 4). But this trend reversed course in April as fewer producers reported expecting lower prices one year ahead. 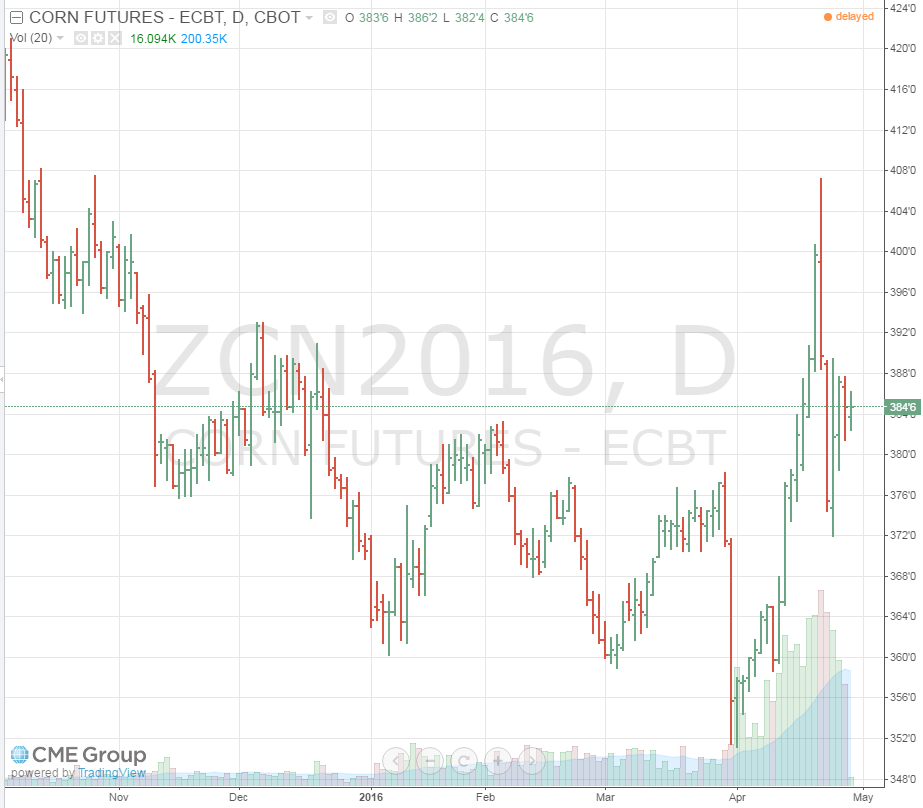 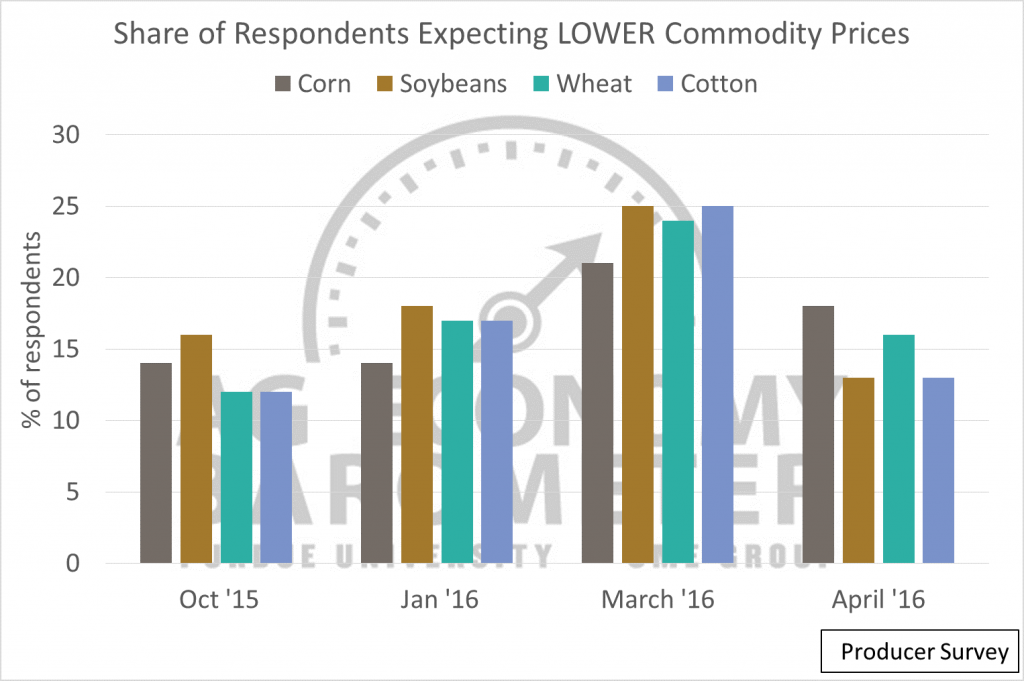 Improvements in crop prices are not the only factor leading to an improvement in producer sentiment. The uptick in sentiment corresponds to several other factors as well. Timely rains in the Great Plains beneficial to the wheat crop improved the yield and revenue outlook for many wheat producers. Favorable spring weather in the Corn Belt, which boosted planting progress above the five-year average, encouraged optimism among producers about 2016 yield prospects. Weather issues in South America, particularly in Argentina (excessive rain) and Brazil (heat and dryness), combined with a weaker U.S. dollar, could boost prospects for U.S. grain and oilseed exports.

While the most recent reading of the Ag Economy Barometer reveals an uptick in producers’ sentiment, it is important to keep the situation in perspective. Overall, the general agricultural outlook is still difficult and the producer survey reflects this concern. When asked about expectations for their farms’ financial situations, a majority of producers reported that their expectations regarding the broad agricultural economy over the next twelve months were for “bad times” financially (Figure 5). 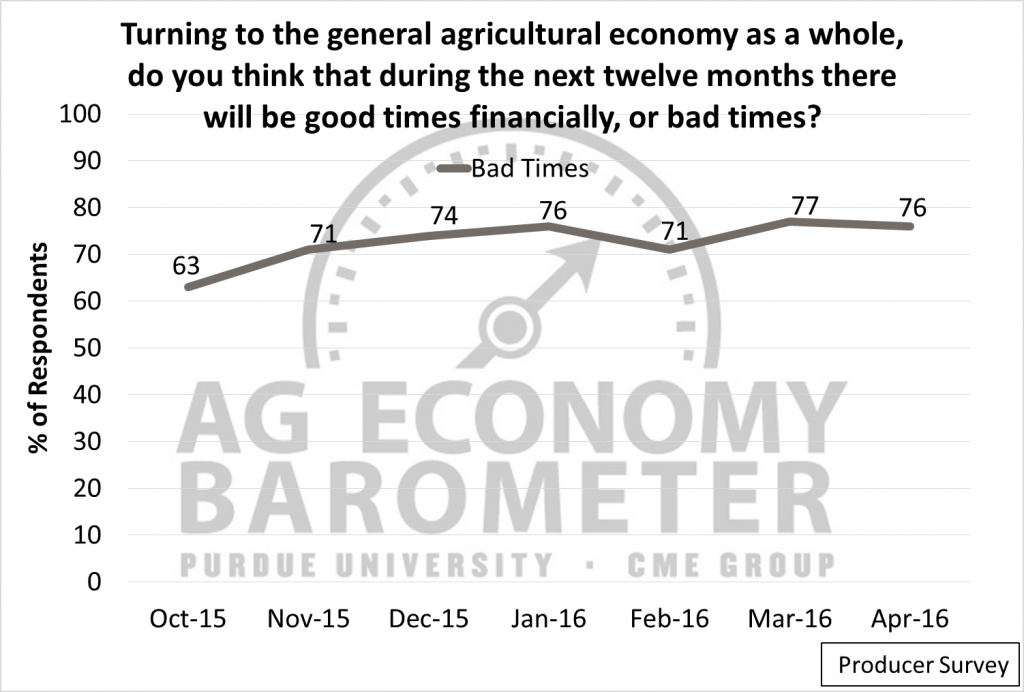 Figure 5. Share of Respondents Describing the General Agricultural Economy as Financially “Bad Times” Over the Next 12 Months.

In addition to the producer survey, we also conduct a quarterly web-based survey of agricultural thought leaders, which includes industry executives and leaders. Results from the April survey of agricultural thought leaders revealed that they are generally more pessimistic regarding the current state of the agricultural economy than were producers. When asked about prospects for the next twelve months, nearly 90 percent of thought leaders reported that they expect “bad times” financially across the sector (Figure 6). This compares to 70-80 percent of producers reporting an expectation of “bad times” financially (Figure 5). 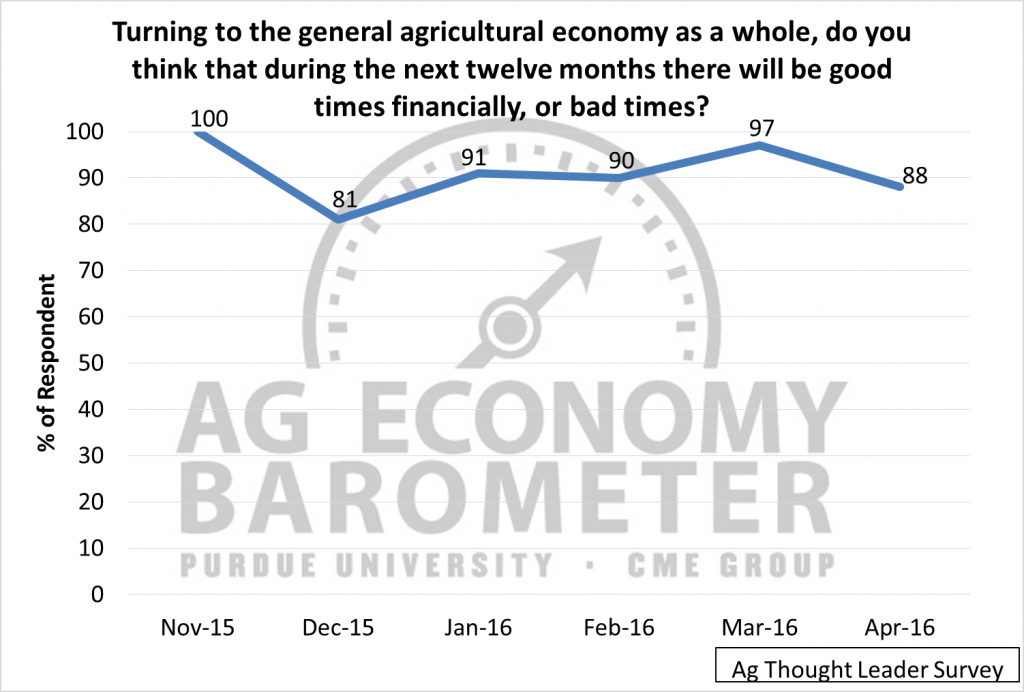 Figure 6. Share of Agricultural Thought Leaders Describing the General Agricultural Economy as Financially “Bad Times” Over the Next 12 Months.

Producer sentiment improved in April after several months of declines. Improvements in commodity prices and in producers’ expectations of future commodity prices were important drivers of the increase in the Ag Economy Barometer. While the improvements in April are encouraging, it’s important to keep the results in perspective. An overwhelming majority of respondents, from both the producer and agricultural thought leaders survey, reported expectations of the next twelve months being “bad times” financially across the agricultural sector. In short, economic conditions in agriculture improved during April, but the broad outlook remains difficult.