The Purdue University-CME Group Ag Economy Barometer index drifted lower to a reading of 112 in September which was 5 points lower than a month earlier. The decline in farmer sentiment was primarily the result of producers’ weaker perception of current conditions as the Current Conditions Index declined to 109, 9 points lower than in August. The Index of Future Expectations also weakened slightly, declining 3 points from a month earlier to a reading of 113. Compared to a year earlier, the barometer this month was 10% lower while producers’ assessment of current conditions was down 22%. These results stand in contrast with future expectations in September which was only 2% weaker than a year ago. The Purdue University-CME Group Ag Economy Barometer sentiment index is calculated each month from 400 U.S. agricultural producers’ responses to a telephone survey. This month’s survey was conducted from September 19-23, 2022, a week or more following USDA’s September Crop Production and World Agricultural Supply and Demand Estimates (WASDE). 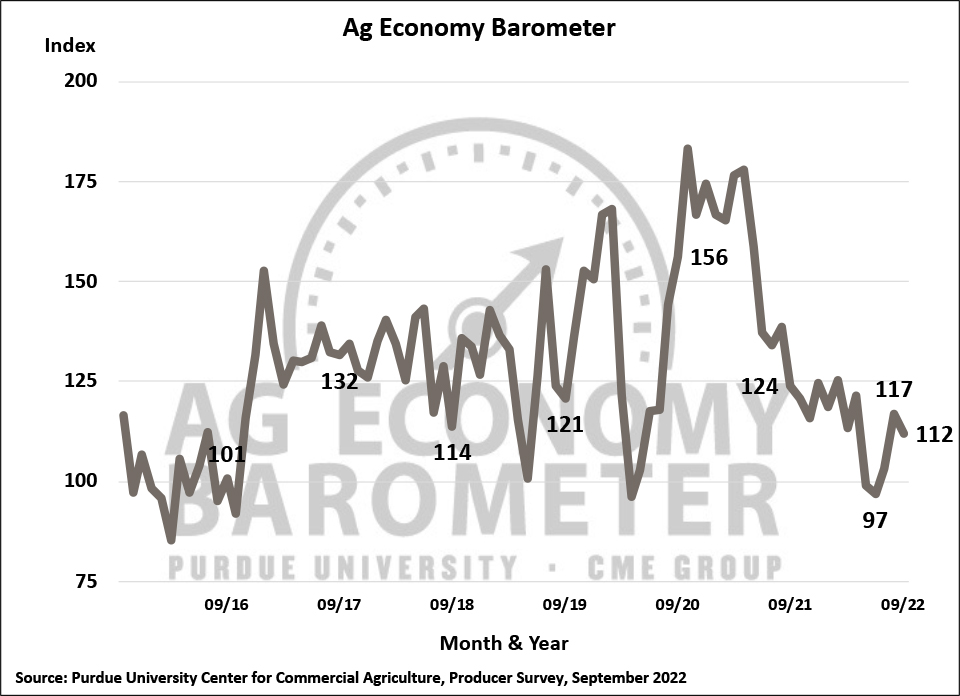 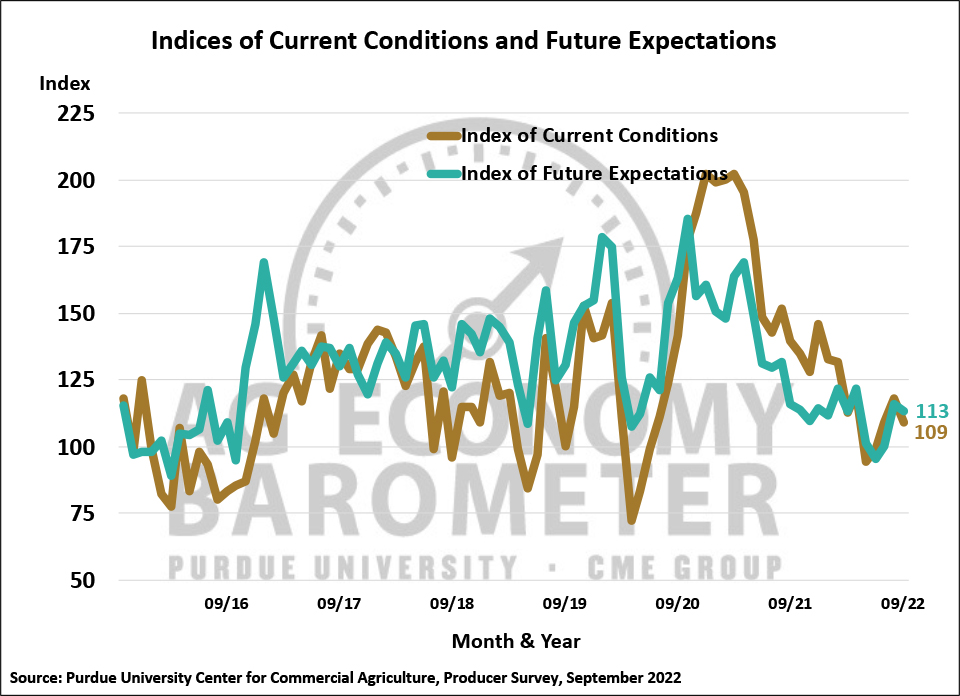 Higher input costs are still the number one concern among survey respondents with the shift in U.S. monetary policy rising to the forefront as an issue among U.S. producers. This month 44% of respondents chose “higher input costs” as their number one concern, down from 53% last month. Second on the list of producers’ concerns for the upcoming year was “rising interest rates”, chosen by 23% of respondents, up from 14% in August. Third on the list of concerns was “availability of inputs” chosen by 14% of producers in the survey. The percentage of producers with concerns about input availability has been relatively stable over the last 3 months, ranging from a low of 12% to a high of 15% suggesting this issue is not going away. Interestingly, the percentage of producers choosing “lower crop and/or livestock prices” as one of their biggest concerns declined over the summer. In July 19% of respondents chose it as one of their biggest concerns while just 8% of producers chose it in this month’s survey. 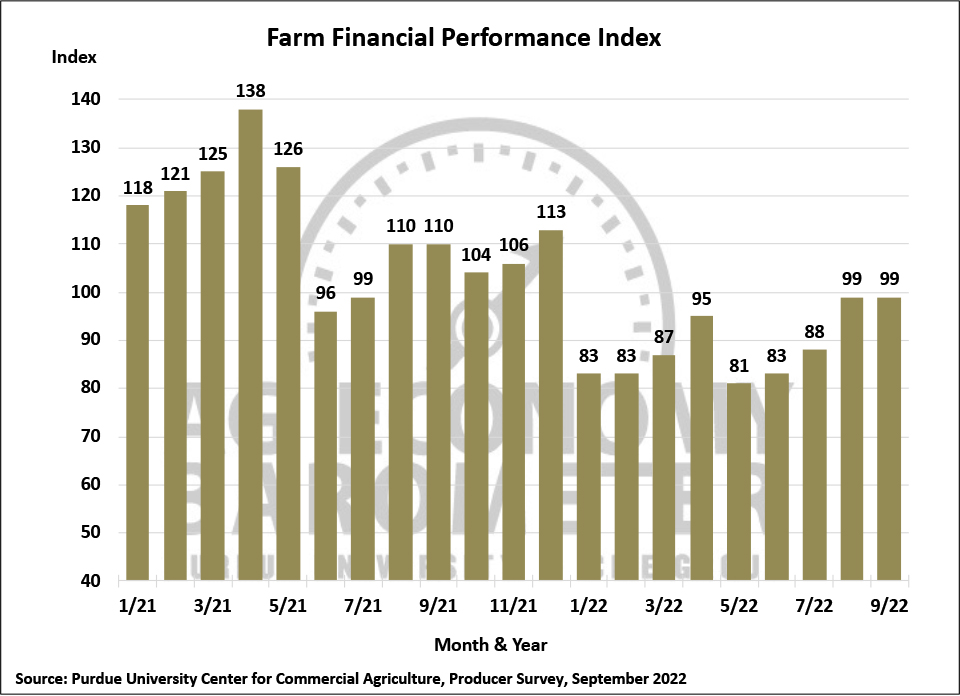 The Farm Capital Investment Index declined to a record low of 31 in September as producers continue to indicate that they do not view this as a “good time” to make large investments in their farming operations. Despite that negative perspective, the percentage of producers who plan to reduce their farm machinery purchases declined again this month, down 2 points compared to responses in August. Since peaking in March at 62 percent, the share of producers who plan to reduce their machinery purchases compared to a year earlier has been declining, dipping to 47% this month. Producers’ plans for farm building purchases tell a similar story, declining from a high of 68% who planned to reduce their building and grain bin purchases back in March to 56% who felt that way in the September survey. Once again, a follow-up question was posed to farmers who reported this being a “bad time” to make large investments to learn why they felt that way. For the third month in a row, producers overwhelmingly said it was primarily because of the increase in prices for farm machinery and new construction. However, interest rates are starting to become a factor influencing producers’ decision making. Throughout the summer the percentage of farmers who chose “rising interest rates” as a primary reason for thinking it’s a bad time to make large investments rose from 14% in August to 21% in September. 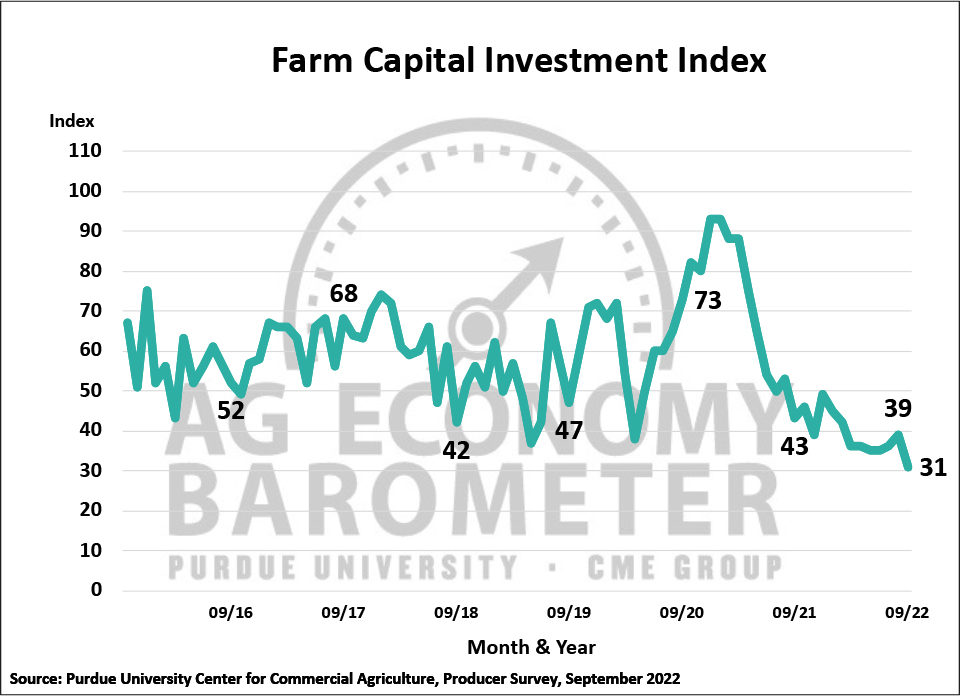 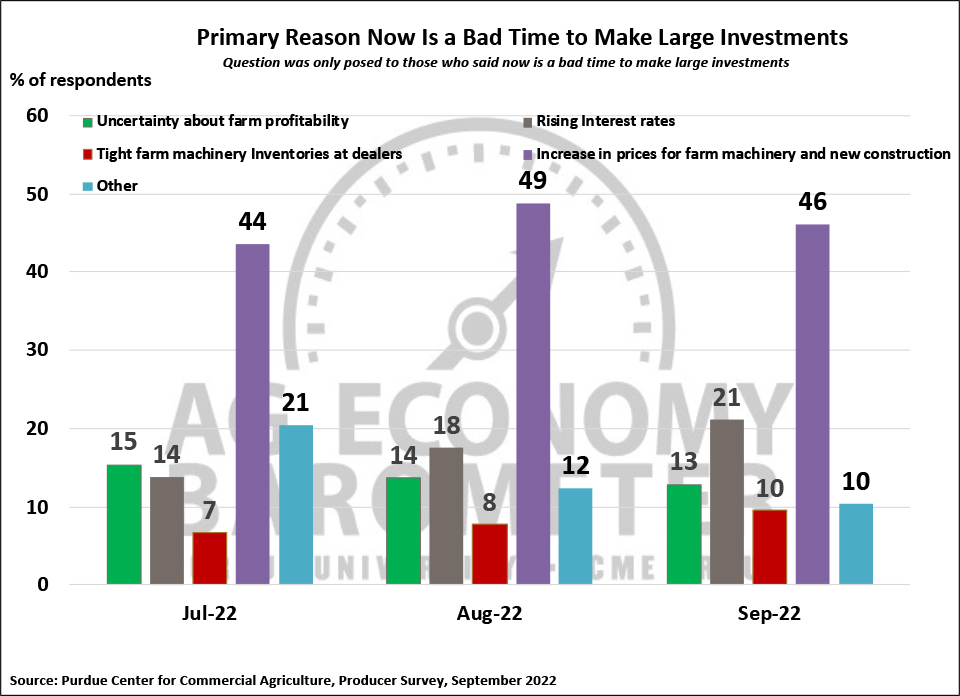 Figure 5. Why is Now a Bad Time to Make Large Investments?, September 2022. 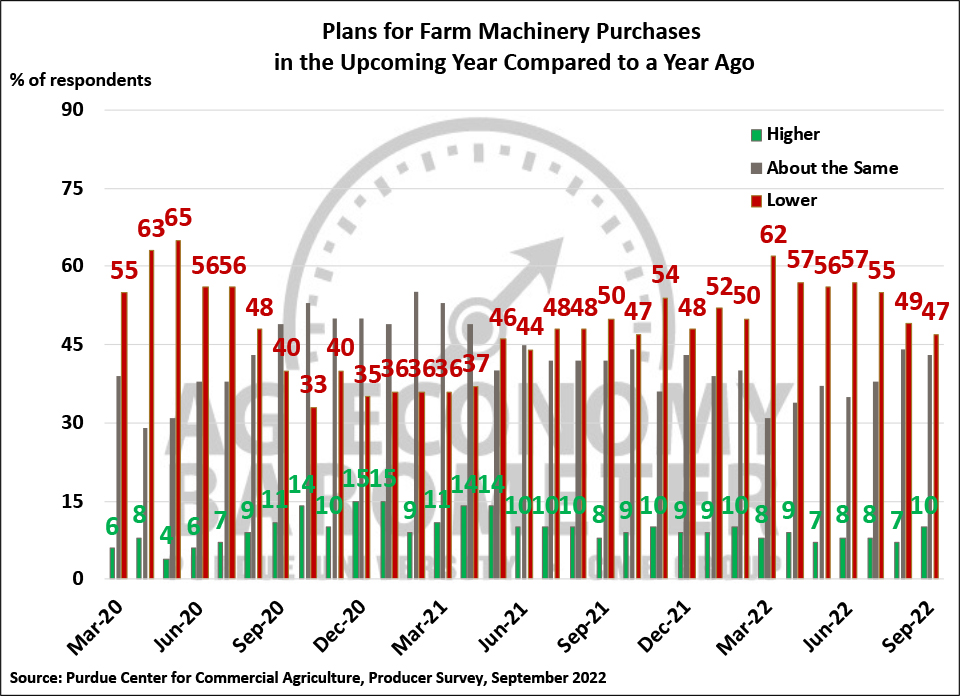 Figure 6. Plans for Farm Machinery Purchases in the Upcoming Year Compared to a Year Ago, March 2020-September 2022. 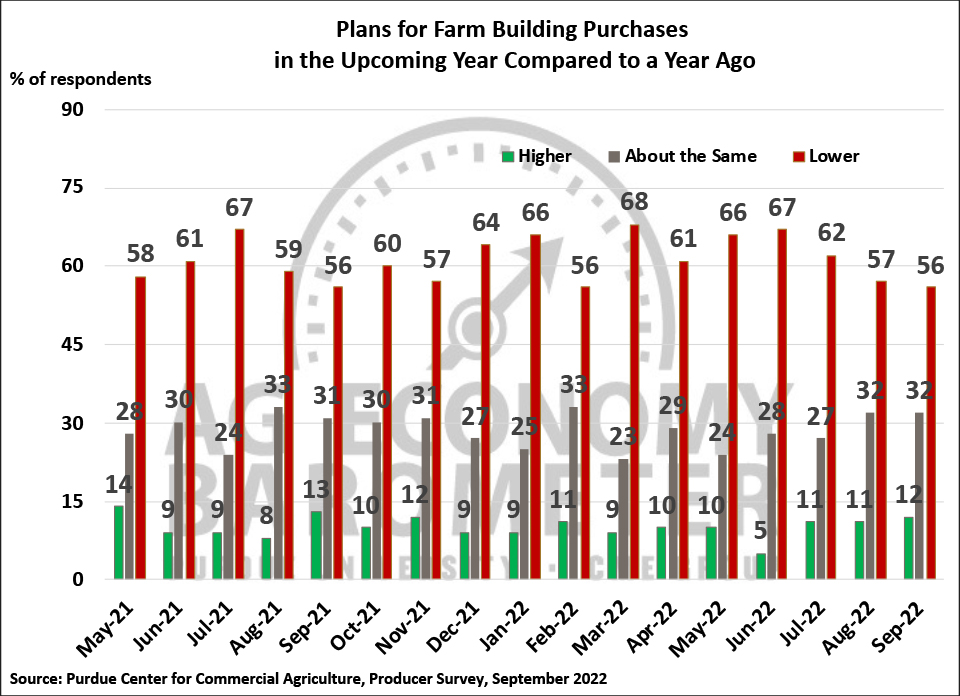 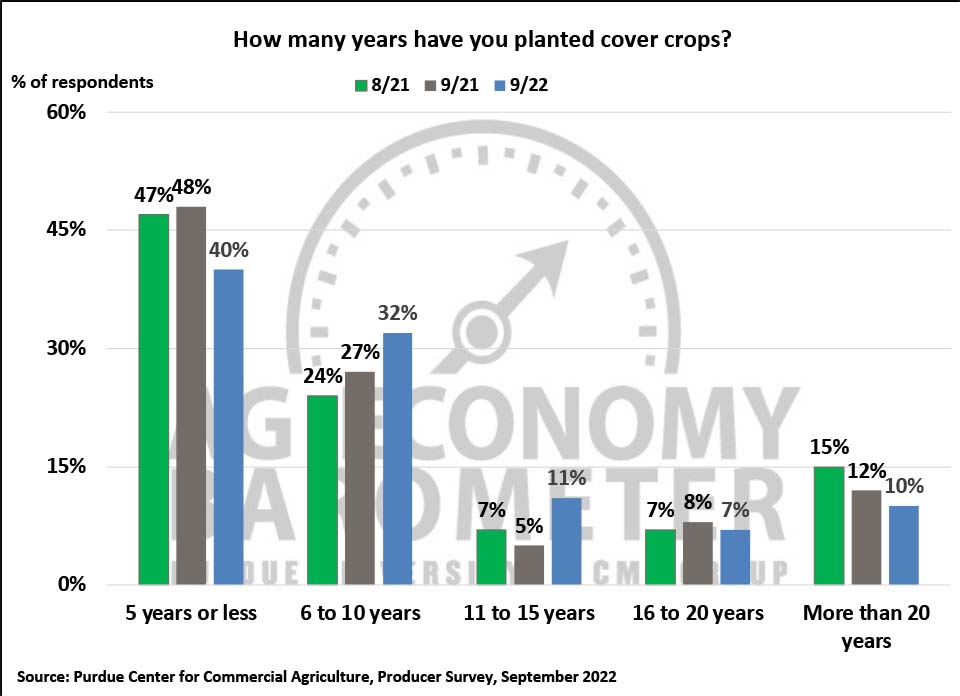 Figure 8. How many years have you planted cover crops? September 2022. 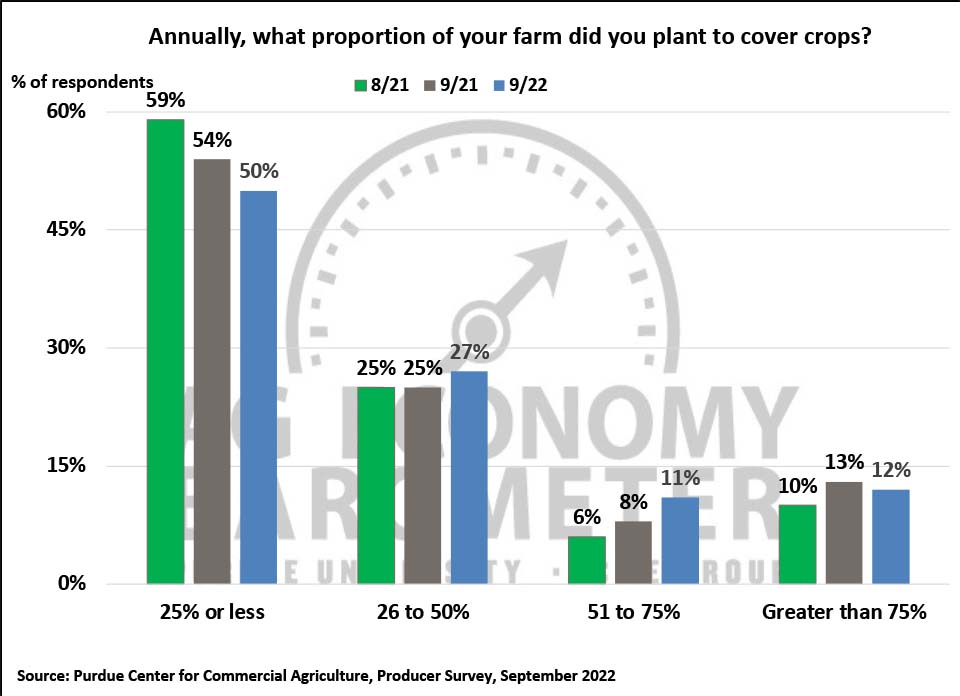 Figure 9. Annually what proportion of your farm did you plant to cover crops? September 2022. 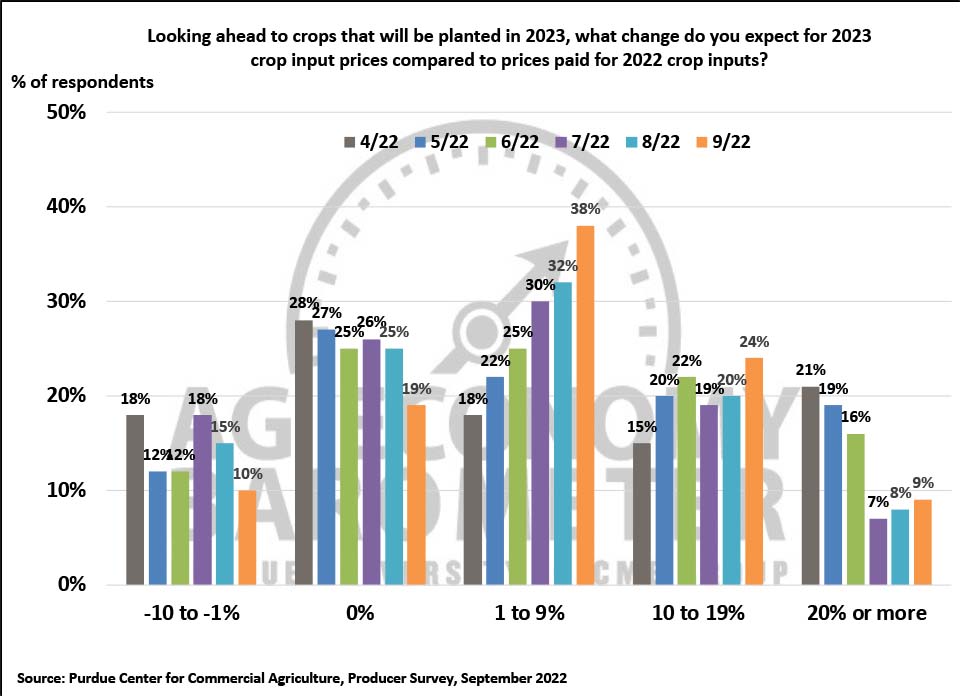 Figure 10. Looking ahead to crops that will be planted in 2023, what change do you expect for 2023 crop input prices compared to prices paid for 2022 crop inputs? September 2022.

Farmer sentiment drifted lower in September as the Ag Economy Barometer declined 5 points to 112. Weaker sentiment regarding current conditions was the primary driver of this month’s decline in the barometer. Input cost rises are a key factor behind the relative weakness in farmer sentiment. Producers are also becoming increasingly worried about the impact of rising interest rates on their farm operations with more of them citing it as a reason why they think now is not a good time to make large investments. Farmers’ perspective on farmland values showed further signs of softening this month as both the short and long-term farmland value indices declined. Farmers’ usage of cover crops appears to be increasing with 57% of respondents reporting that they use cover crops on at least some of their farmland. Most cover crop users employ cover crops on just a portion of their acreage, with improving soil health and improving erosion control cited as the two most common motivations for planting cover crops, while very few cover crop users said they plant cover crops primarily to sequester carbon.