The Purdue University-CME Group Ag Economy Barometer plummeted in May to a reading of just 99, the weakest farmer sentiment reading since April 2020. The May 2022 barometer reading marked just the 9th time since data collection began in fall 2015 that the overall measure of farmer sentiment fell below 100. Agricultural producers’ perceptions regarding current conditions on their farms, as well as their future expectations, both weakened this month. The Index of Current Conditions fell 26 points to a reading of 94, while the Index of Future Expectations declined 21 points to 101 in May. Notably, this month saw a rise in the percentage of respondents who feel their farm is worse off financially now than a year earlier, an indication that escalating production costs are troubling producers. The Purdue University-CME Group Ag Economy Barometer sentiment index is calculated each month from 400 U.S. agricultural producers’ responses to a telephone survey. This month’s survey was conducted from May 16-20, 2022. 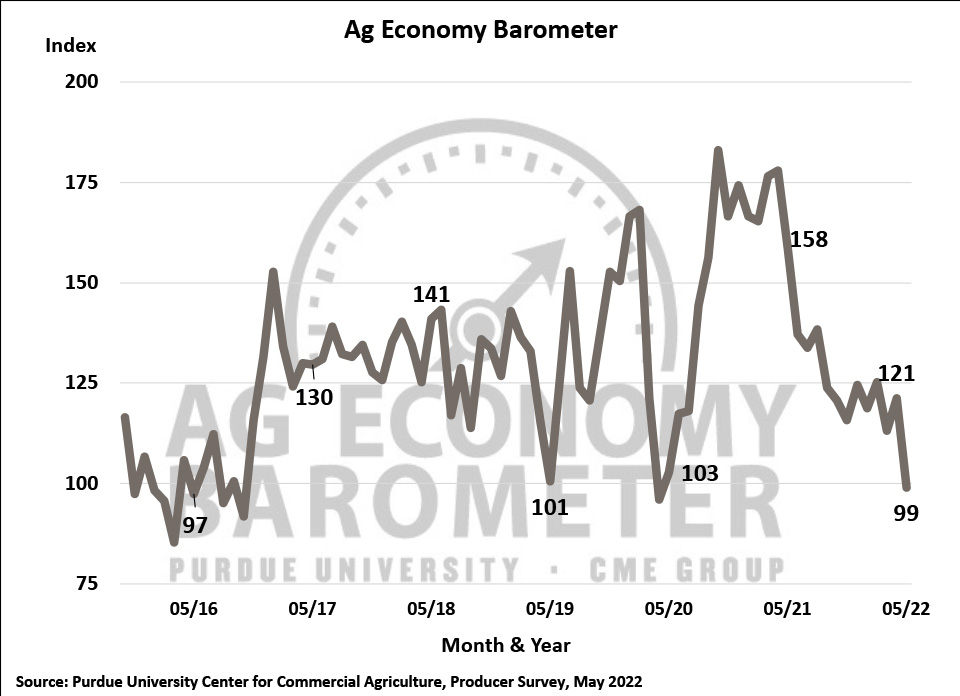 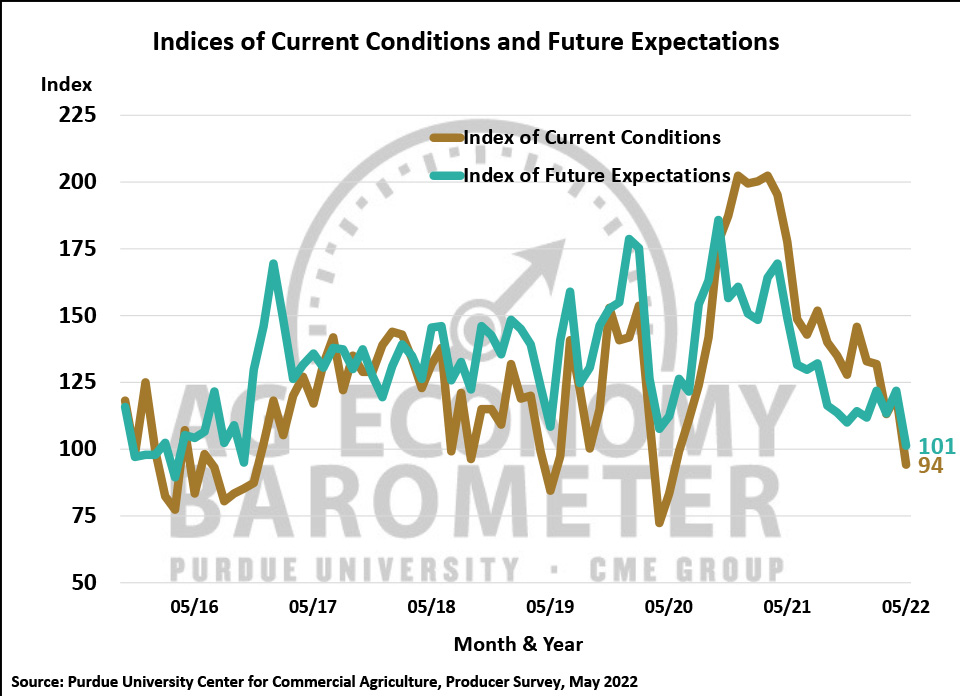 Figure 2. Indices of Current Conditions and Future Expectations, October 2015-May 2022.

The Farm Capital Investment Index drifted lower in May to 35, a new low for the index. The May reading was down just one point from a month earlier but was 30 points below its May 2021 reading. In this month’s survey, only 13% of respondents said this is a good time to make large investments in their operation while 78% said they viewed it as a bad time to invest in things like machinery and buildings. Half of the producers in this month’s survey said their machinery purchase plans were impacted by low farm machinery inventory levels, up from 41% in the April survey, suggesting that supply chain issues are at least partly responsible for the ongoing weakness in the capital investment index.

Noticeably fewer producers this month reported having difficulty purchasing crop inputs for the 2022 crop season than in prior surveys. In the May survey, one out of five (19%) producers said they had difficulty purchasing inputs for the 2022 crop season, down from an average of 32% who reported difficulties in the December through April surveys. Among those producers who still reported difficulties, problems were apparent in all major input categories including herbicides, farm machinery parts, fertilizer and insecticides. 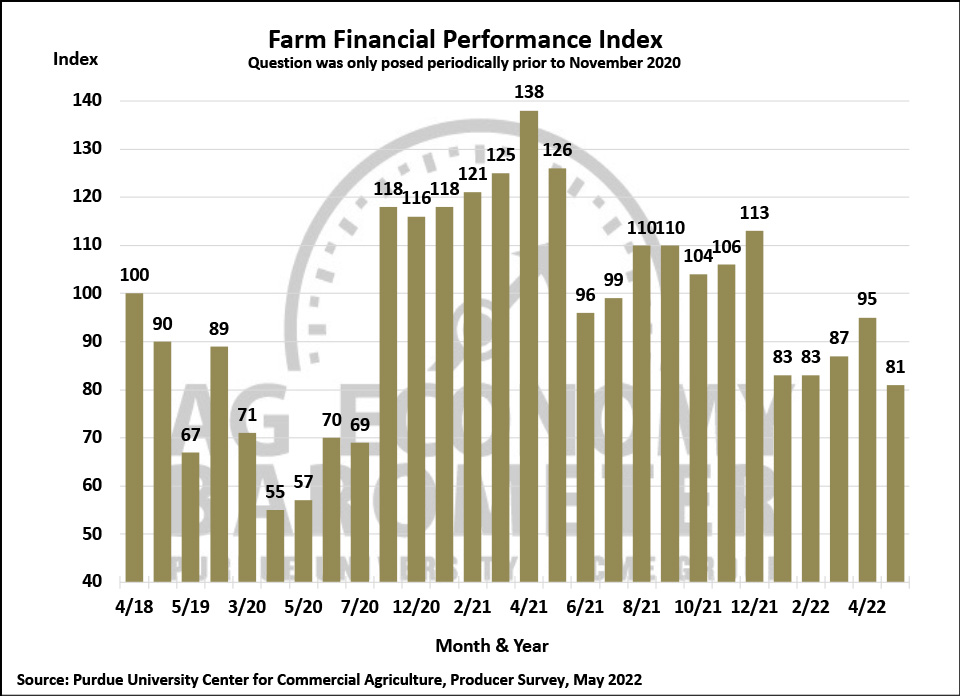 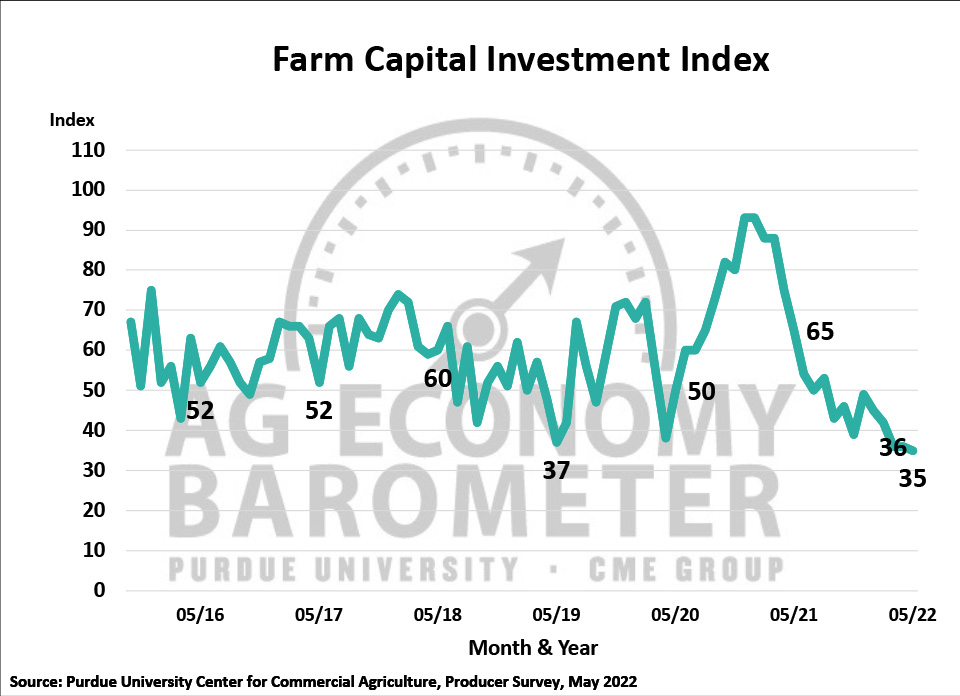 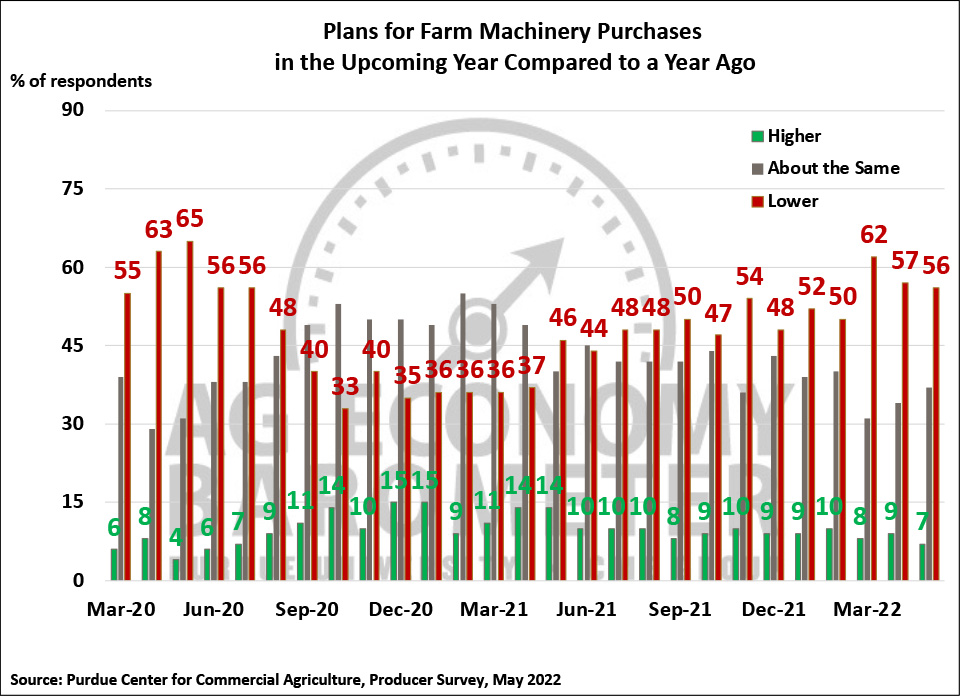 Figure 5. Plans for Farm Machinery Purchases in the Upcoming Year Compared to a Year Ago, March 2020-May 2022. 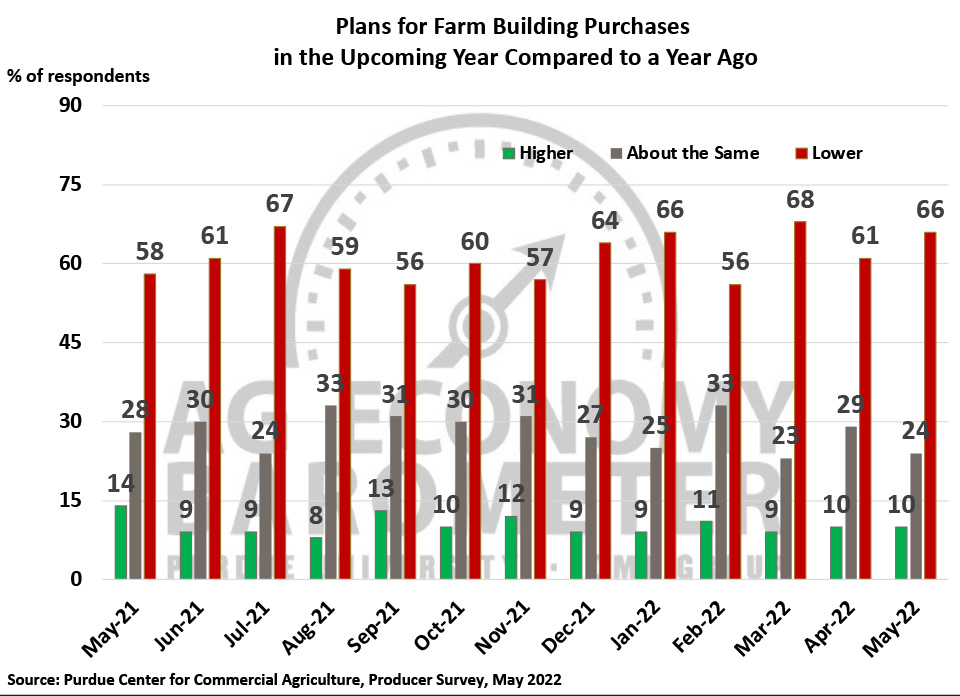 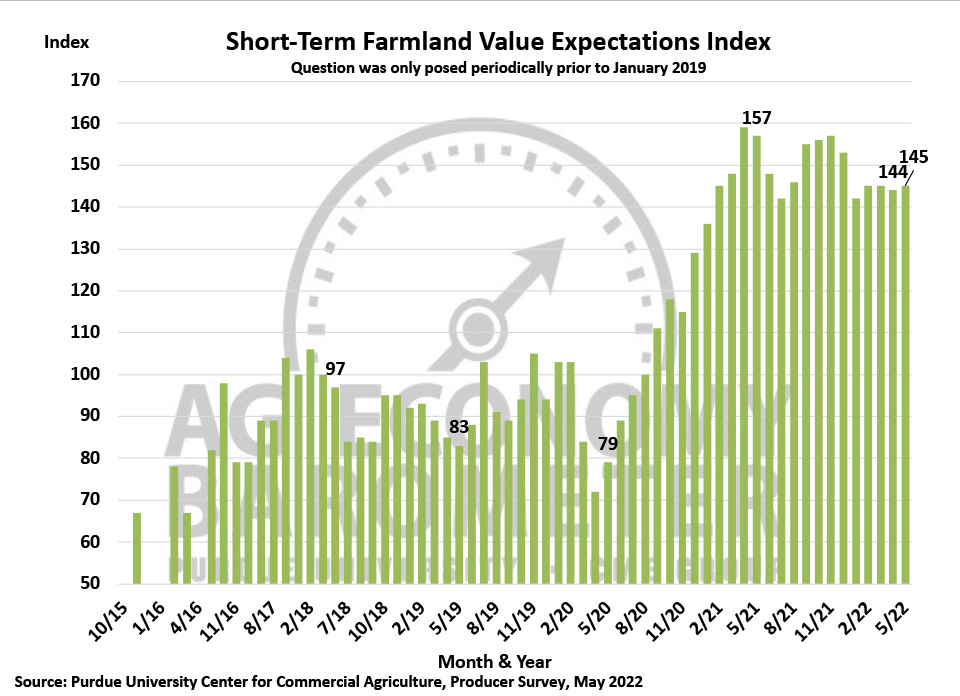 Despite the weak sentiment expressed by farmers regarding their farms’ financial performance, producers remain relatively optimistic about farmland values. The Long-Term Farmland Value Expectations Index, based upon producers’ farmland outlook over the upcoming 5 years, rose 8 points in May to a reading of 149. This month’s reading takes the long-term index back to its pre-pandemic (February 2020) level. The Short-Term Farmland Value Expectations Index, based upon producers’ 12-month outlook, at a reading of 145 was virtually unchanged from a month earlier. The short-term index has been range–bound throughout 2022, fluctuating between 142 and 145. Both the short and long-term farmland indices in May were 7 to 8% below the peak levels attained last fall.

The contrast between farmers’ relatively optimistic view of farmland values and their expectations for weak farm financial performance continues to be a bit of a puzzle. For the last several months, our monthly survey has included a follow-up question posed to respondents who expect farmland values to rise over the next 5 years, asking them about the main reason they expect values to rise. Respondents have consistently chosen non-farm investor demand as the top reason followed closely by inflation. Interestingly, few respondents chose strong farm cash flows or low interest rates as the main reason they expect farmland values to rise. 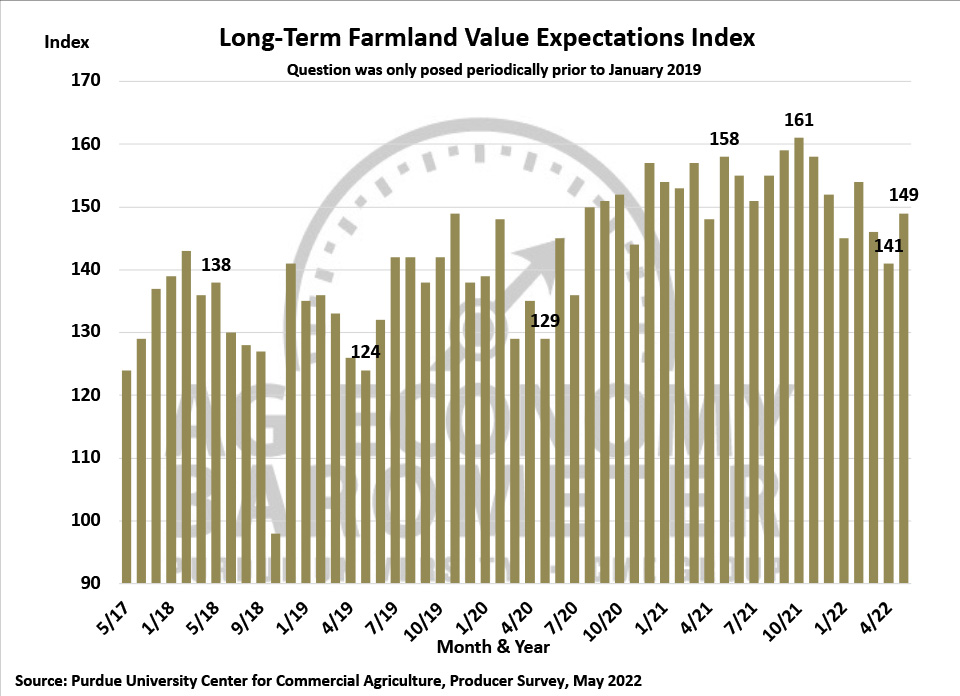 The war in Ukraine has disrupted food production and distribution leading to serious concerns about the availability of food supplies, especially in importing countries. Wheat supplies and prices are of special concern because many low-income countries are reliant upon wheat imports from the Black Sea region. Multiple policy proposals have been discussed in the U.S. as a means of encouraging more wheat production. This month’s survey included several questions focused on crop producers’ wheat production plans and how they might respond to policy proposals.

Farmer sentiment plummeted in May as the Ag Economy Barometer dipped to its lowest level since the early days of the pandemic in spring 2020. Despite strong commodity prices, producers are very concerned about their farms’ financial performance in 2022. Weakness in producers’ sentiment appears to be driven by the rapid rise in production costs and uncertainty about where input prices are headed. Fewer producers this month said they experienced difficulty in purchasing crop inputs than reported having difficulty throughout the winter and early spring,suggesting that input availability did not impact planting progress this spring. Despite concerns about farm financial performance, producers remain relatively optimistic about farmland values, largely because of expectations for strong non-farm investor demand and inflation. Finally, this month’s survey suggests that producers with wheat/double-crop soybean experience plan to increase their wheat acreage in fall 2022.