Farmer sentiment remained weak in June as the Purdue University-CME Group Ag Economy Barometer fell to a reading of 97, 2 points below its May reading. During June farmers were a bit more optimistic about current conditions as the Current Conditions Index of 99 was 5 points higher than in May. However, the small improvement in current conditions was more than offset by weaker expectations for the future, as the Index of Future Expectations declined 5 points to a reading of 96, the lowest level since October 2016. Rising costs and uncertainty about the future continue to be a drag on farmer sentiment. This month 51% of survey respondents said they expect their farms to be worse off financially a year from now, the most negative response received to this question since data collection began in 2015. The Purdue University-CME Group Ag Economy Barometer sentiment index is calculated each month from 400 U.S. agricultural producers’ responses to a telephone survey. This month’s survey was conducted from June 13-17, 2022. 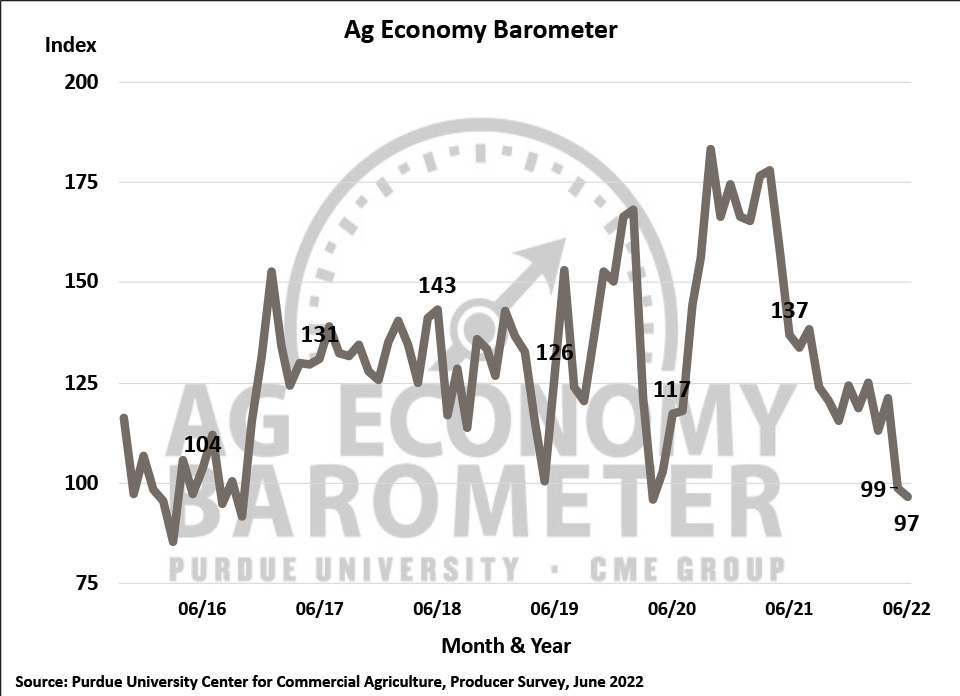 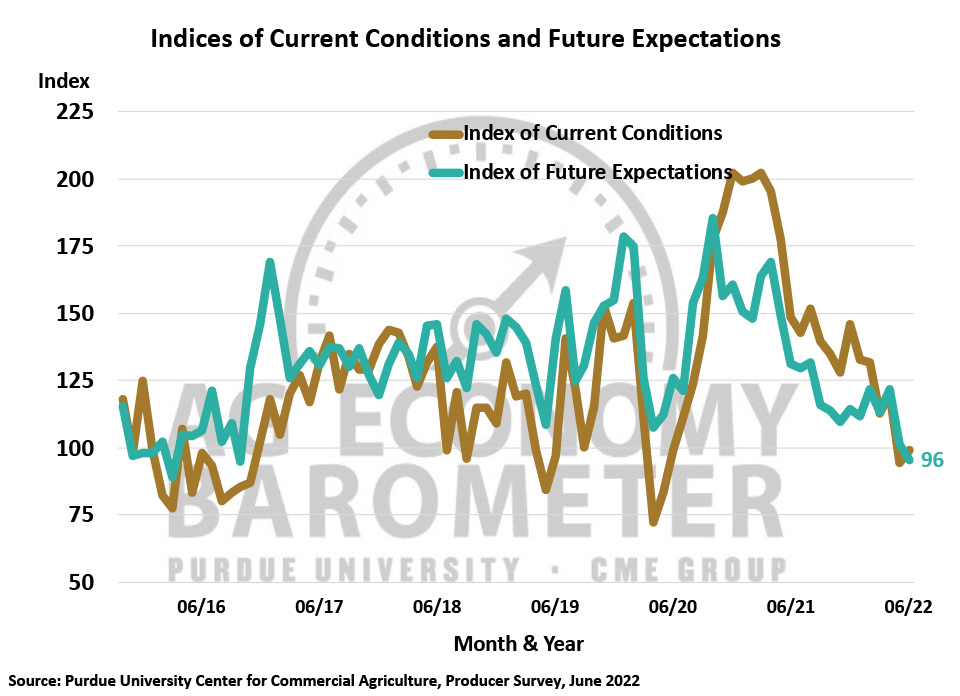 Although producers said they expect their farm’s financial condition to be worse in June 2023 compared to June 2022, the Farm Financial Performance Index actually improved slightly to a reading of 83 compared to 81 in May. Responses received to the Farm Financial Performance Index question are primarily reflective of income expectations for 2022. On the other hand, the question that asks them about financial conditions a year from now brings into play concerns about the ongoing escalation in production costs, in addition to concerns about commodity price volatility, which could lead to a production cost/income squeeze taking place in 2023. Still, even with the small rise in the financial performance index, it remained one of the index’s lowest readings of the last two years. 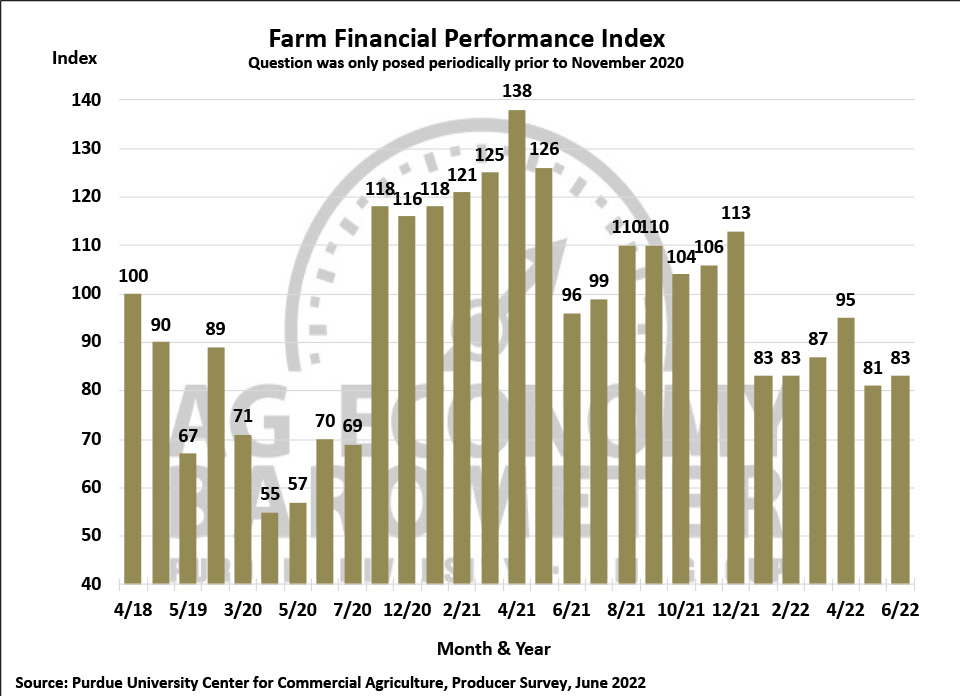 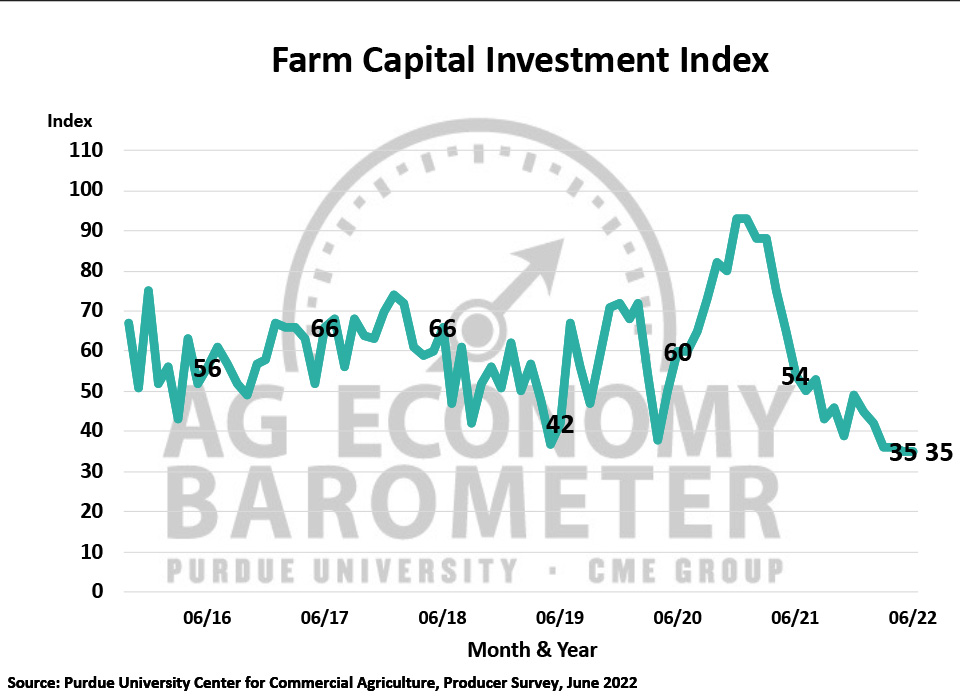 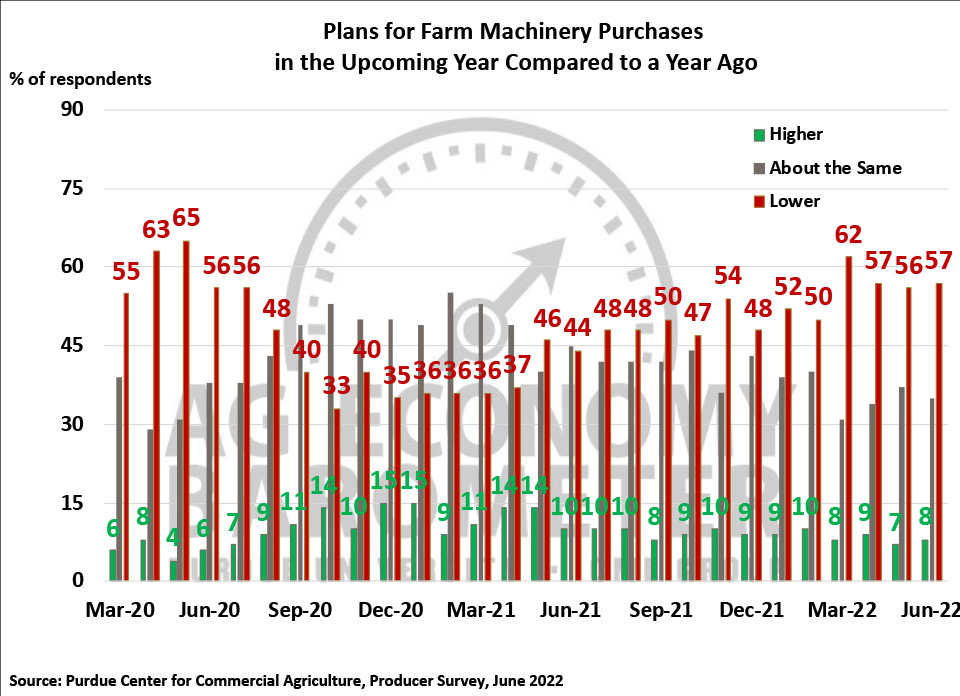 Figure 5. Plans for Machinery Purchases in the Upcoming Year Compared to a Year Ago, March 2020-June 2022 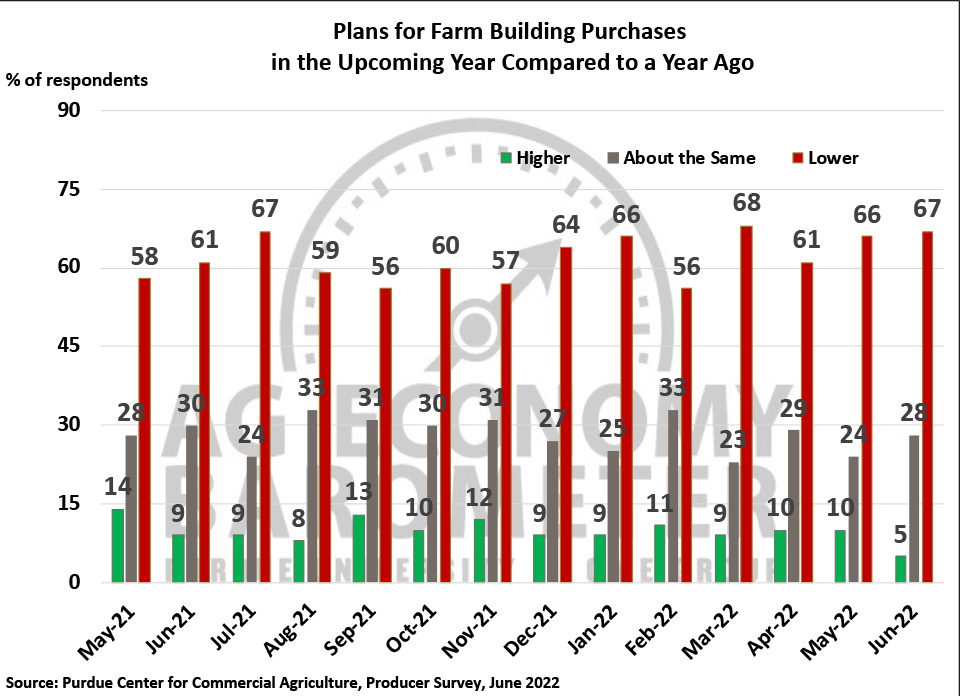 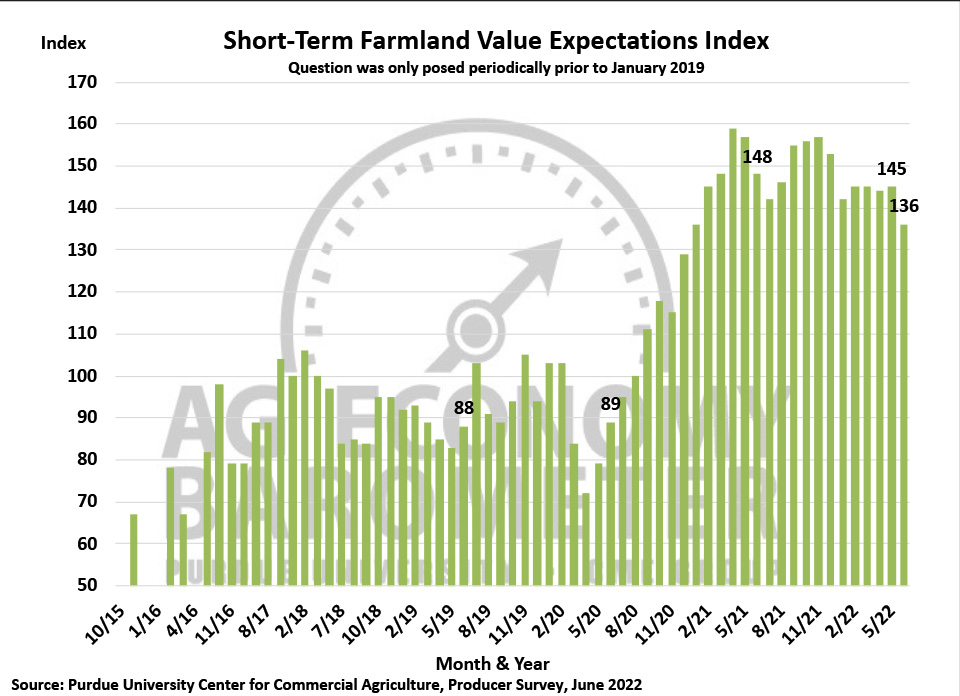 Both the Short-Term and Long-Term Farmland Value Expectations Indices declined in June. The short-term index fell 9 points to a reading of 136, while the long-term index fell to 141, 8 points below its May reading. Both farmland value indices are well below the highs established last fall. The long-term index in June was 12% below last fall’s peak and the short-term index was down 13% compared to its fall 2021 high of 157. Taken in context over the life of the barometer survey, both indices remain at strong levels, but farmers are noticeably less confident that farmland values will continue to rise from current levels. Producers who expect farmland values to rise over the next five years continue to point to non-farm investor demand and inflation expectations as the top two reasons for their optimism. 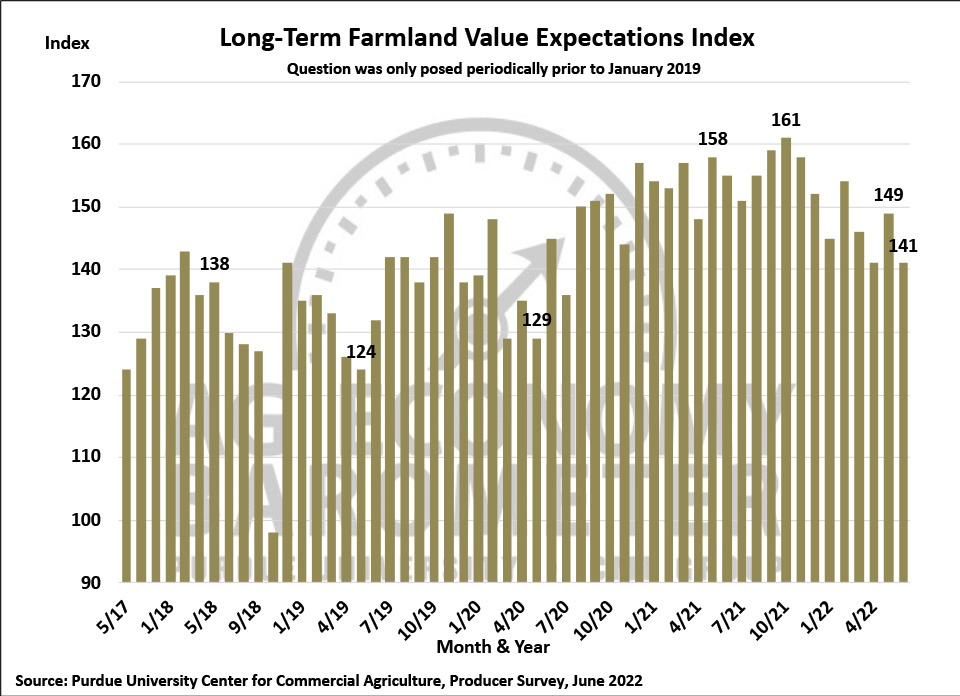 Given ongoing concerns about world food grain supplies, this month’s survey again included several questions focused on crop producers’ production plans for the upcoming year. Among the farmers in our survey who planted winter wheat in fall 2021, one out of four (24%) said they plan to increase their winter wheat acreage this fall. Among crop producers who did not plant winter wheat last fall, 14% responded that they intend to plant some winter wheat this fall. Responses to both questions point to a rise in wheat acreage in response to strong wheat prices. Responding to a somewhat broader question about their cropping plans for the upcoming year, one out of five (19%) of crop producers said they intend to change their crop mix in the upcoming year in response to rising input costs. Among those who plan to shift their crop mix, almost half of respondents (46%) said the biggest change will be to devote a higher percentage of their acreage to soybeans. Twenty-six percent of those planning a crop mix change said the biggest change would be to devote more of their farm to wheat production while 21% of respondents said they would shift towards planting more corn.

Farmer sentiment remained weak in June as the Ag Economy Barometer fell two points below its May reading. Producers were somewhat more optimistic about current conditions this month, but that improvement was more than offset by weaker expectations for the future. Just over half of respondents to this month’s survey said they expect their farms to be worse off financially a year from now, which was the most negative response received to this question since data collection began in 2015. Rising input costs and uncertainty about the future continue to weigh on farmer sentiment. One out of five crop producers in the June survey said they intend to change their crop mix in 2023 with the largest percentage of respondents planning a move towards more soybean production. Although both farmland value indices remain at strong levels, producers were noticeably less confident that farmland values will continue to rise than they were last fall. However, in our first attempt to learn about corn/soybean farmers’ expectations for 2023 cash rental rates, over half of producers said they expect to see rental rates rise.