WEST LAFAYETTE, Ind. and CHICAGO – Producer sentiment surrounding the U.S. agricultural economy rebounded in June after a dip in May, according to the latest survey results from the Purdue/CME Group Ag Economy Barometer.

The June Producer Sentiment Index landed at 104, up seven points from the May reading. The index is based on a monthly survey of 400 U.S. agricultural producers and includes measures of sentiment surrounding both current conditions and future expectations.

Barometer principal investigator Jim Mintert said the increase can be at least partially attributed to stronger overall grain and oilseed markets over the last three months. In June, corn and soybean both traded at prices not seen since summer 2015. Soybean prices approached $12 per bushel, well above $8.75 that producers saw in April. 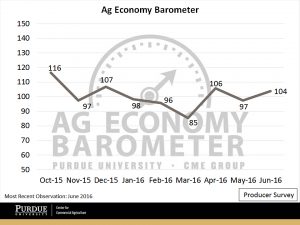 “Evaluating the barometer more closely shows us that the uptick in producer sentiment was driven primarily by an improvement in the Index of Current Conditions, which jumped from 83 in May to 98 in June,” said Mintert, who is the director of Purdue’s Center for Commercial Agriculture and a professor of agricultural economics. “Additional increases in overall producer sentiment came from the Index of Future Expectations, which settled slightly higher at 107, up three points since May.”

Surveys over the last three months also have shown that producers view their own farm operations’ financial health differently than they view the health of the overall agricultural economy, said David Widmar, Purdue research associate who works on the barometer.

“Producers hold a more pessimistic view of their own farms’ financial situations than they do of the agricultural economy,” he said.

For example, after declining significantly in April, the number of producers expecting their farm operations to be worse off financially in a year moved higher, increasing from just 27 percent in April to 37 percent in June.

In contrast, the share of respondents who expected financially bad times for the overall agricultural economy in the next 12 months trended lower over the same time period, declining from 75 percent in April to 65 percent in June.

The reasons why these sentiments vary isn’t clear, but a continuation of the trend could be a sign that producers will emphasize controlling costs through reduced spending, Widmar said.

One factor weighing heavily on producers’ minds is the summer weather. While farmers always have to deal with the weather, there has been some concern surrounding the possibility of La Niña setting in and the impact it could have on U.S. corn and soybean production.

Barometer researchers included weather-related questions on the June survey given the impact that weather speculation already has had on rising grain and oilseed market prices, Mintert said. Producers were asked about the likelihood of widespread adverse impacts on 2016 crop yields associated with extreme weather events. About 44 percent of respondents reported that they felt this was at least somewhat likely to happen. When asked about the likelihood of weather-related yield loss in their local areas, just over half of survey respondents – 53 percent – reported that they expect extreme weather to reduce crop yields in 2016.

Researchers also asked producers whether they had changed their farms’ marketing plans because of the potential for extreme weather events in the next year. Nearly 30 percent of respondents said they had.

About the Purdue University Center for Commercial Agriculture

As the world’s leading and most diverse derivatives marketplace, CME Group (www.cmegroup.com) is where the world comes to manage risk.  CME Group exchanges offer the widest range of global benchmark products across all major asset classes, including futures and options based on interest rates, equity indexes, foreign exchange, energy, agricultural products and metals.  Around the world, CME Group brings buyers and sellers together through its CME Globex® electronic trading platform and its exchanges based in Chicago, New York and London.  CME Group also operates one of the world’s leading central counterparty clearing providers through CME Clearing and CME Clearing Europe, which offer clearing and settlement services across asset classes for exchange-traded and over-the-counter derivatives.  CME Group’s products and services ensure that businesses around the world can effectively manage risk and achieve growth.