As the dust settled on what turned out to be a volatile June and early July for commodity markets, agricultural producer sentiment turned higher (Figure 1). The Purdue/CME Group Ag Economy Barometer, which is based on a monthly survey of 400 agricultural producers, came in at 112 for July, up from 104 in June and 97 in May. 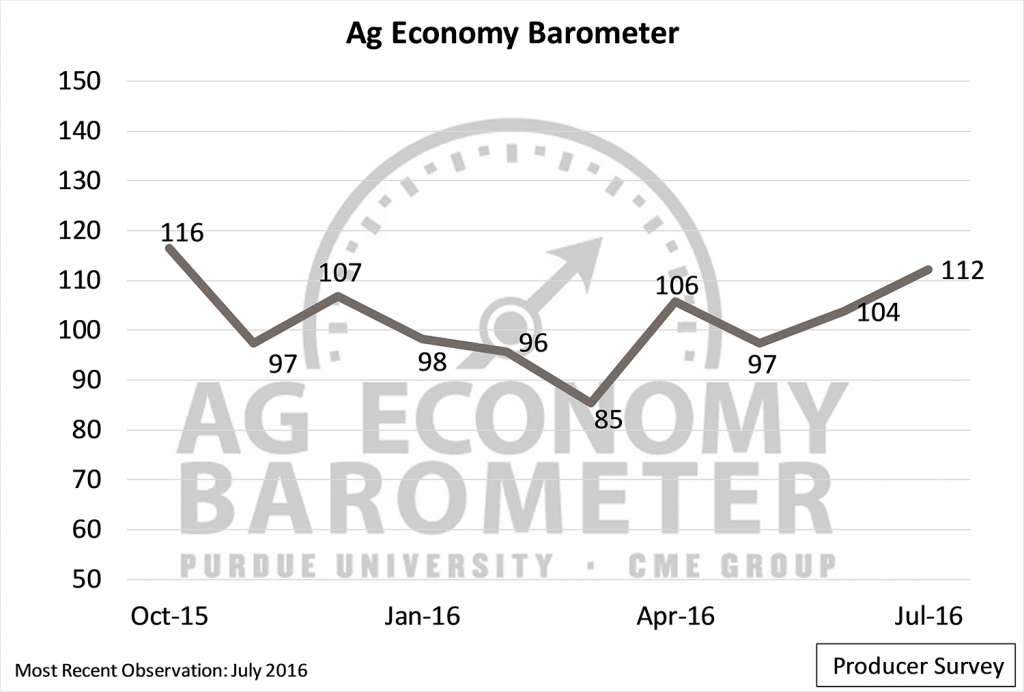 The improvement in producer sentiment occurred despite the fact that grain and oilseed prices declined sharply in late June and early July. The uptick in sentiment was driven by producer’s expectations for the future. Specifically, the producer Index of Future Expectations jumped to 121 in July, well above June’s observation of 107 and the highest reading for the index since data collection began in the fall of 2015 (Figure 2). 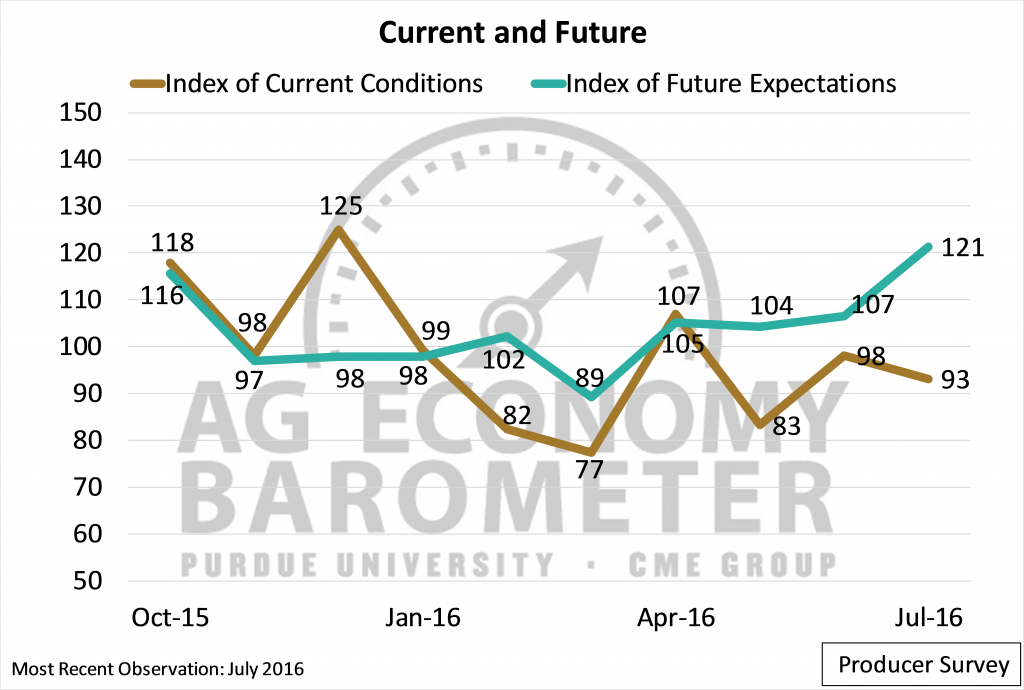 Although producer perspective regarding future conditions in the agricultural sector improved, their sentiment about current conditions, measured by the Index of Current Conditions, declined to a value of 93, down from June’s more optimistic reading of 98.

Although the uptick in crop prices this spring was short-lived and prices retreated in late June and July, it appears the price rally boosted producers’ expectations regarding future economic conditions in agriculture. In other words, the rally did not substantially improve perspective regarding near-term economic conditions, but the ability of crop prices to trade, albeit briefly, at levels substantially higher than observed since last year (approaching $4.50 per bushel for corn and $12 for soybeans) did affect producers’ views regarding future economic conditions in production agriculture. 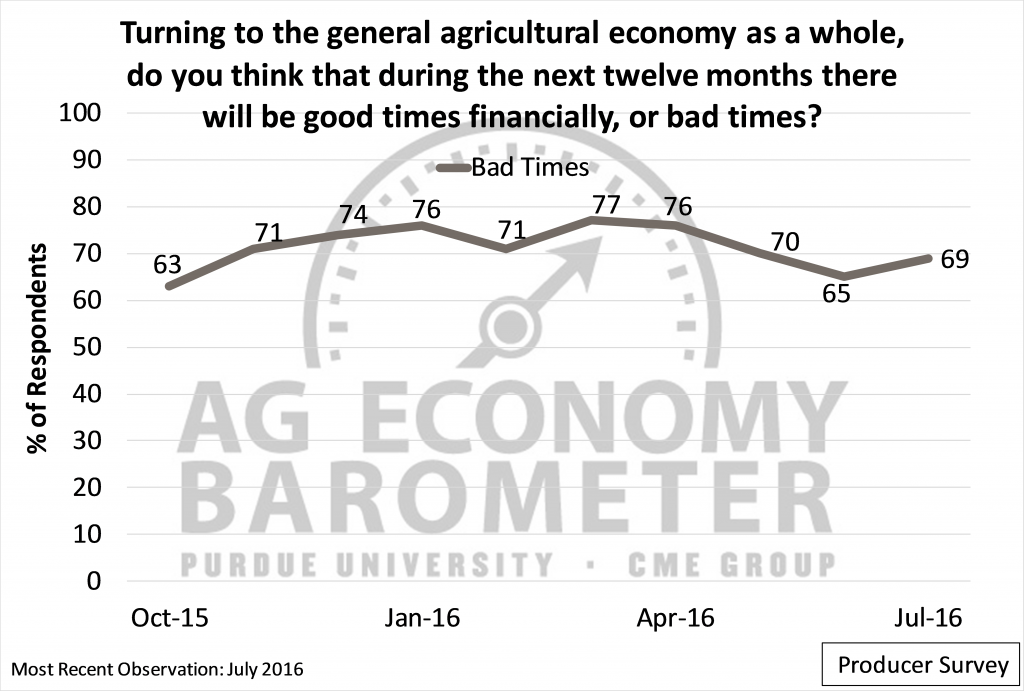 Figure 3. Share of Respondents Expecting the Broad Ag Economy to Experience “Bad Times” Financially During the Next 12 Months, October 2015-July 2016. 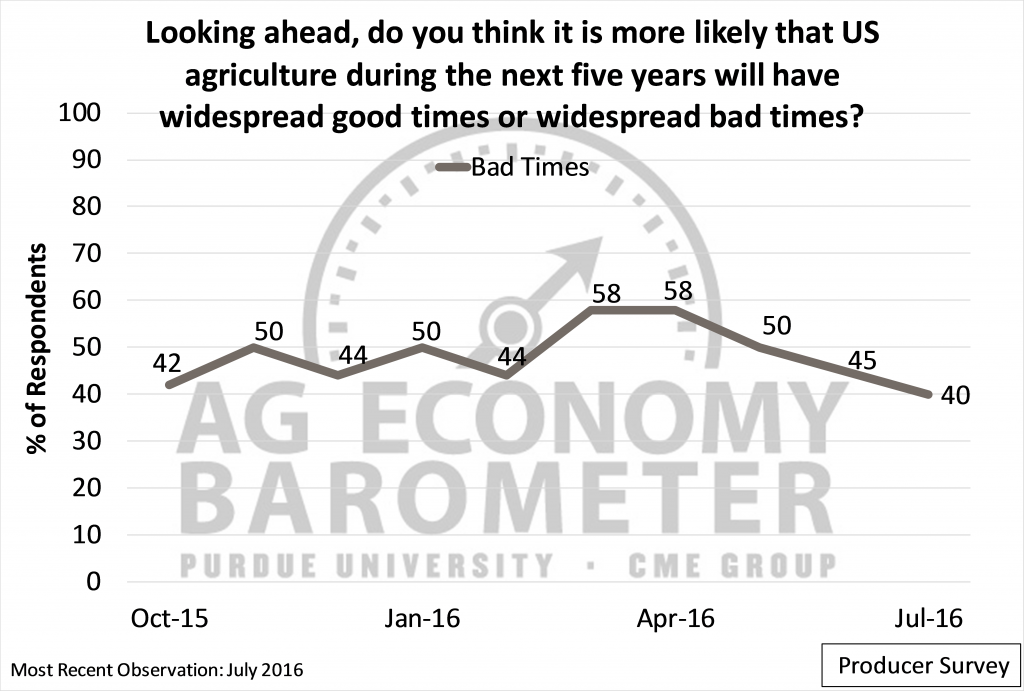 Figure 4. Share of Respondents Expecting the Broad Ag Economy to Experience “Bad Times” Financially During the Next 5 Years. 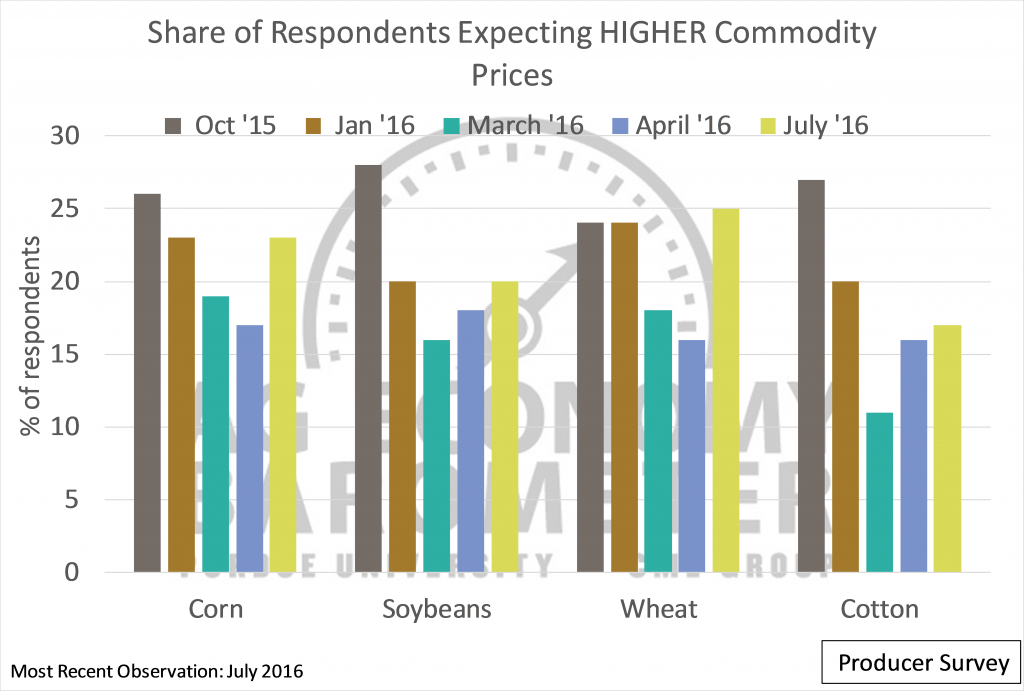 In addition to commodity prices, expectations related to farmland values also shed some light on producers’ long-run view of the agricultural economy.  During July, producers were asked about farmland values 12 months out.  Twenty-three percent of respondents reported expecting higher farmland values one year ahead. This is higher than in any previous survey dating back to October 2015.  Furthermore, the share of respondents expecting lower farmland values 12 months out, 25 percent during July, was the lowest percentage recorded since data collection began last fall. Additionally, when producers were asked to rate farmland as an investment, 62 percent of survey respondents gave farmland a favorable rating in July. This compares to 52 percent when this question was last posed in May. 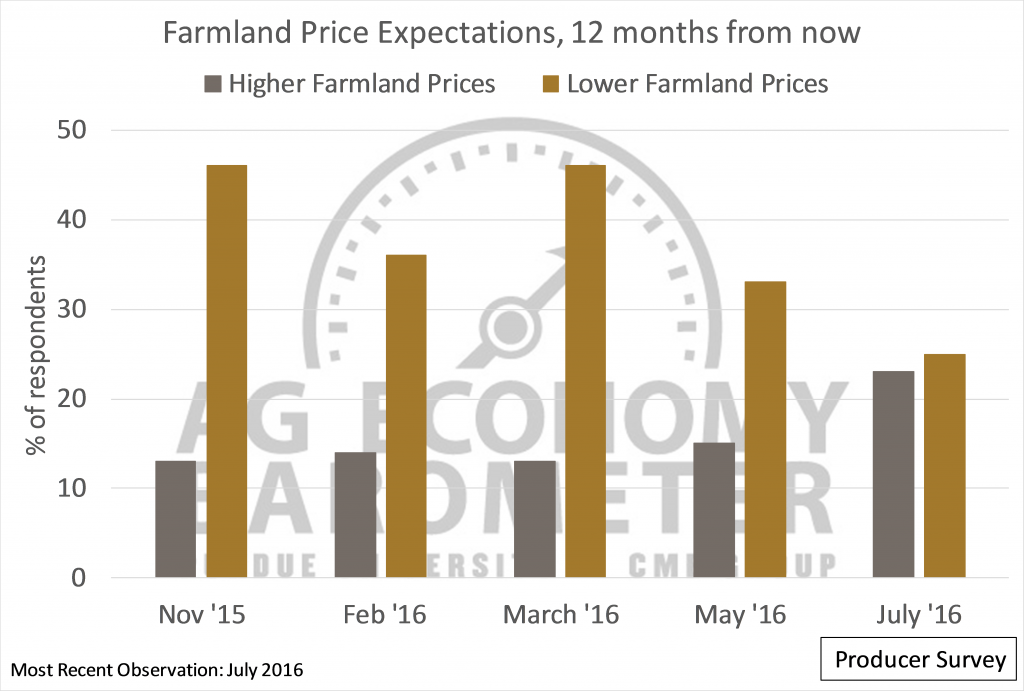 The decline in crop prices that took place during late June and July helped push down agricultural producers perspective regarding current economic conditions, but this decline was more than offset by an improvement in producers longer run view of economic conditions in agriculture resulting in an improvement in the July reading of the Ag Economy Barometer. Producers improving view of the long run was likely buoyed by declines in their cost structure, driven by declines in fertilizer prices and cash rents during 2016. It appears that a combination of lower production costs and a brief rally in crop prices this spring was enough to restore some of producers’ long-run optimism.