After several months of improvement in sentiment toward the ag economy, declining commodity prices weighed heavily on farmer sentiment during August. The Purdue University/CME Group Ag Economy Barometer–based upon a monthly survey of 400 farmers across the U.S.–fell to 95 in August, down from 112 in July. The 17-point drop from July to August was the largest one-month decline in the Ag Economy Barometer since November 2015. 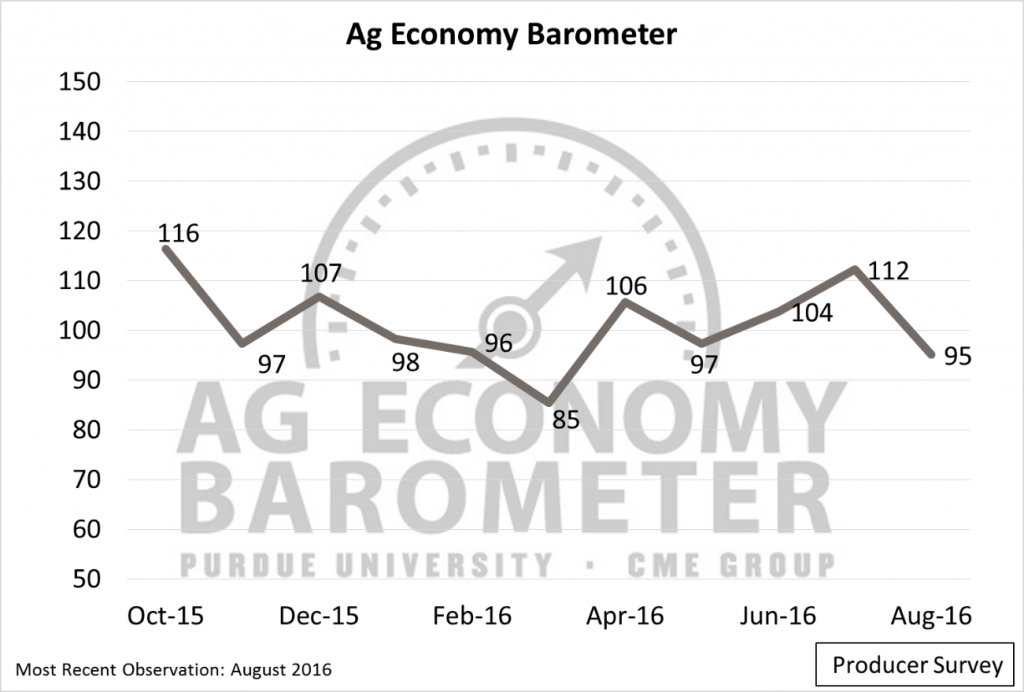 Farmer sentiment regarding both the current state of the ag economy (measured by the Index of Current Conditions) and future prospects (measured by the Index of Future Expectations) declined during August (Figure 2). This was in sharp contrast to July when farmers’ optimism about their future prospects pushed the Ag Economy Barometer up, despite concerns about current economic conditions. 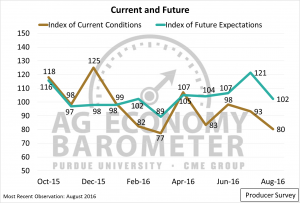 Farmer sentiment in late-spring and early summer was buoyed by a spring rally in key commodity prices, but near-ideal growing conditions for corn and soybeans this summer helped push crop prices down sharply. The U.S. Department of Agriculture indicated in its August crop production estimates that record yields and harvests of both corn and soybeans are expected this fall, leading to increasing carryover stocks for both crops and the lowest corn prices of the last decade. Since mid-June, when the commodity price rally peaked, December 2016 corn futures prices have declined by more than $1 per bushel and November 2016 soybean futures prices have fallen by $1.75 per bushel (corn futures prices shown in Figure 3). 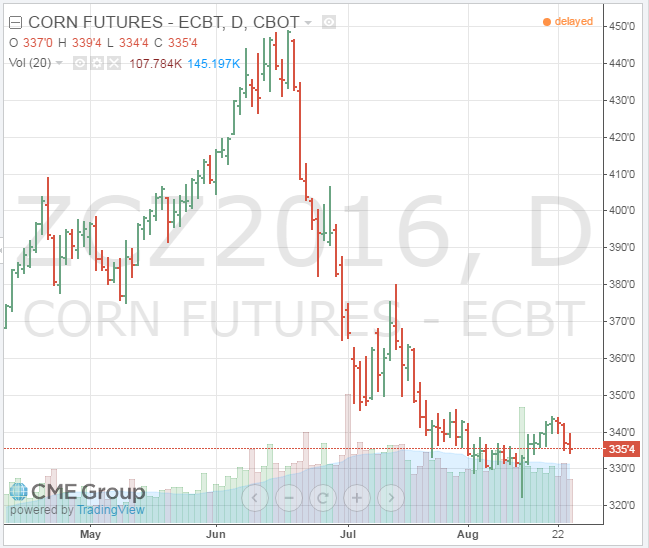 Tight operating margins for crop producers are leading to adjustments in production costs. For example, the Purdue crop budgets for rotation corn reported a $47-per-acre reduction in variable costs (seed, fertilizer, herbicide, etc.) from 2015 to 2016. Furthermore, a recent Purdue survey of Indiana farmland values and cash rents found that cash rents, on average, decreased 9.8 percent to 10.9 percent across the state from 2015 to 2016. This summer’s crop-price declines indicate crop production margins will be even tighter in 2017 than in 2016, leading to questions about the direction production costs will take in the year ahead. 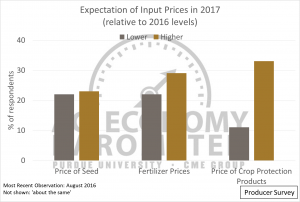 Producer sentiment took a U-turn in August, declining sharply after improving in three out of the four previous months. The spring rally in crop prices fueled some long-run optimism on the part of producers, which was reflected in stronger Ag Economy Barometer readings for several months. But the sharp decline in crop prices over the last two months, with many producers facing cash corn prices below $3 per bushel this fall, eroded remaining optimism among crop producers, pushing the barometer down sharply in August.