Following three months of strong gains, the Purdue/CME Group Ag Economy Barometer shifted course during February, declining to a reading of 134 compared to 153 a month earlier. Although the Barometer—a measure of producer sentiment based on a monthly survey of 400 U.S. agricultural producers—fell 19 points below its record high set in January, it was still the second highest reading since data collection began in fall 2015 (Figure 1). 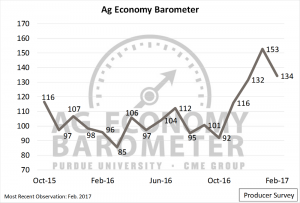 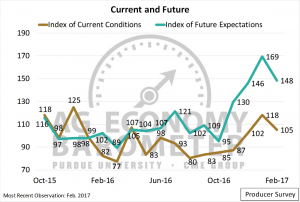 Figure 2. Index of Current Conditions and Index of Future Expectations. October 2015 to January 2017.

The concern producers expressed about current economic conditions is consistent with other measures of conditions in the farm economy. For example, during its recent annual Agricultural Outlook Forum, USDA projected net farm income in 2017 will fall 9 percent below 2016’s to $62 billion, which would be 50 percent below the peak net farm income set in 2013. Responses to individual questions on the barometer survey provide some additional clarity with respect to producers’ perspective on the farm economy. When asked about the future of the overall agricultural economy, a larger share of respondents expect financially “bad times” over the next 12 months (52 percent) than in the next five years (42 percent) (Figure 3), suggesting there is more concern about the near term than the longer-term outlook. Moreover, despite the fact that both of these measures have improved since October, it’s clear that the late-fall/early winter shift in agricultural producers’ perspective regarding economic conditions can best be described as an improvement in sentiment regarding what is still a challenging operating environment. 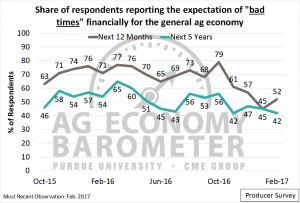 Figure 3. Share of Producers Expecting “Bad Times” Financially for the General Agricultural Economy over the Next 12 Months and 5 Years.

In a separate question, producers were asked to rate farmland as an investment. In February 2017, 64 percent of respondents rated farmland favorably as an investment, up from 52 percent in November 2016 and 55 percent a year earlier (Figure 4). 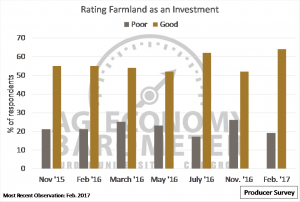 Figure 4. Producers’ Rating of Farmland as an Investment, November 2015 to February 2017.

Importance of Exports to U.S. Agriculture 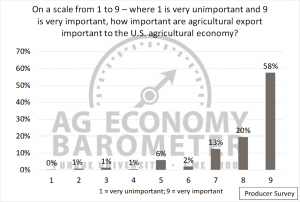 With spring planting in the Corn Belt rapidly approaching, producers are finalizing planting decisions. The expected profitability of corn vs. soybeans in 2017 will be one of the key factors determining the crop mix. To better understand producers’ perspective regarding their spring planting decisions, producers were asked whether they expected corn or soybeans to be more profitable in 2017. One-third of respondents reported corn would be more profitable in 2017, while two-thirds of respondents indicated they expect soybeans to be more profitable this year. These results suggest there will be even more interest than usual in USDA’s Planting Intentions report, which will be released on March 31, 2017.

Following three consecutive increases in the Ag Economy Barometer, producer sentiment moderated in February and retreated to the level reported in December 2016. The decline in producer sentiment was reflected in reduced optimism about current conditions and lowered expectations regarding the future, both compared to a month earlier. However, despite the decline in sentiment observed during February, it’s clear that producers remain more optimistic than they were in October. The Index of Future Expectations remains well above its early fall reading and producers are more confident about the value of farmland as an investment than they were last fall.