The Purdue University-CME Group Ag Economy Barometer improved in April to a reading of 121, which was 8 points higher than a month earlier. Despite this month’s increase, the ag sentiment index remains 32% lower than its April 2021 reading. This month’s modest rise in the barometer was attributable to an improvement in ag producers’ perspective on their current situation as well as what they expect for the future. The Index of Current Conditions rose 7 points to a reading of 120 while the Index of Future Expectations rose 9 points to an index value of 122. Similar to the barometer, both the current conditions and future expectations indices remain well below year ago levels. Ongoing strength in commodity prices appeared to be responsible for the modest sentiment improvement, although producers’ concerns about both rising input costs and their difficulties in procuring inputs continues to hold back sentiment. The Purdue University-CME Group Ag Economy Barometer sentiment index is calculated each month from 400 U.S. agricultural producers’ responses to a telephone survey. This month’s survey was conducted from April 18-22, 2022. 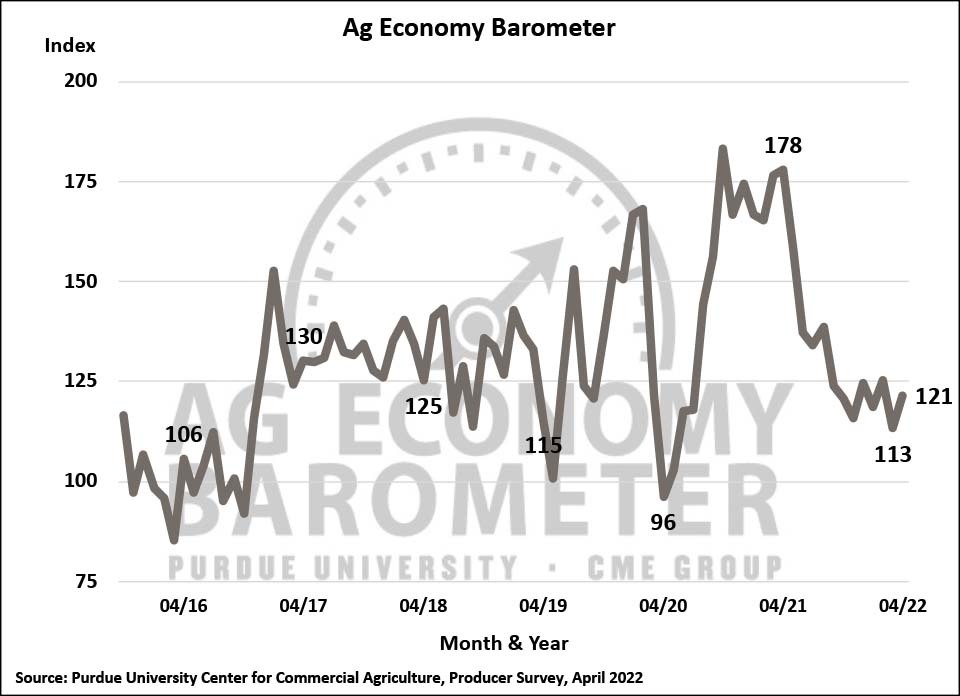 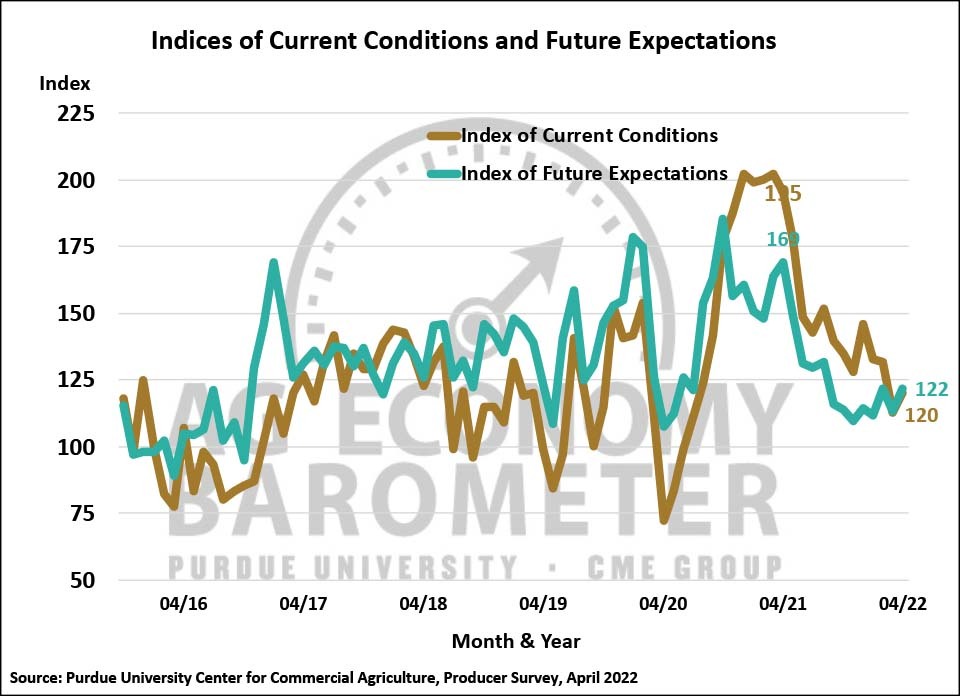 An improving perspective on their farm’s financial performance was key to this month’s sentiment improvement. The Farm Financial Performance Index improved to a reading of 95, a rise of 8 points compared to March and 12 points higher than in January and February. Rising prices for major commodities, especially corn and soybeans, led to the change in producers’ financial outlook. For example, Eastern Corn Belt cash prices for corn in mid-April rose more than 10% above their mid-March level while bids for fall delivery of 2022 crop corn climbed 20% over the same period. Soybean prices rose as well, despite USDA’s late March release of U.S. producers’ surprisingly large 2022 soybean planting intentions. Near-term delivery prices for soybeans rose about 7% from mid-March to mid-April while elevator bids for fall delivery of new crop soybeans climbed 5% over the one-month span.

Producers continue to say that their top concern for their farming operation is higher input costs. Forty-two percent of producers chose higher input costs as their biggest concern, which was more than twice as many who chose government policies (21%) or lower output prices (19%). It’s hard to overstate the magnitude of the cost increases producers say they are facing. This month 60% of survey respondents said they expect input prices to rise by 30% over the next 12 months. This compares to an average of 37% of respondents who said they were expecting a cost increase of this magnitude when the same question was posed in the December 2021 through March 2022 surveys. When asked specifically for their expectations for 2023 crop input prices compared to prices paid for 2022 crop inputs, 36% of respondents said they expect prices to rise 10% or more and 21% of crop producers said input price rises of 20% or more are likely. The war in Ukraine has added a new level of uncertainty for producers. Sixty percent of survey respondents said the biggest impact of the war on U.S. agriculture will be on input prices.

Crop input challenges extend beyond their inflated cost to their availability. In April, 34% of producers said they experienced some difficulty in purchasing inputs for the 2022 crop season, up from 27% in March. In a follow-up question, producers who said they had some difficulty obtaining inputs said that herbicides (30% of respondents) were most problematic followed closely by farm machinery parts (27%) fertilizer (26% of respondents) and insecticides (17% of respondents). In a closely related question, 11% of crop producers said they received notice an input supplier would not be able to deliver one or more crop inputs they had already purchased for use in 2022. Herbicide availability was the top problem reported by these producers. 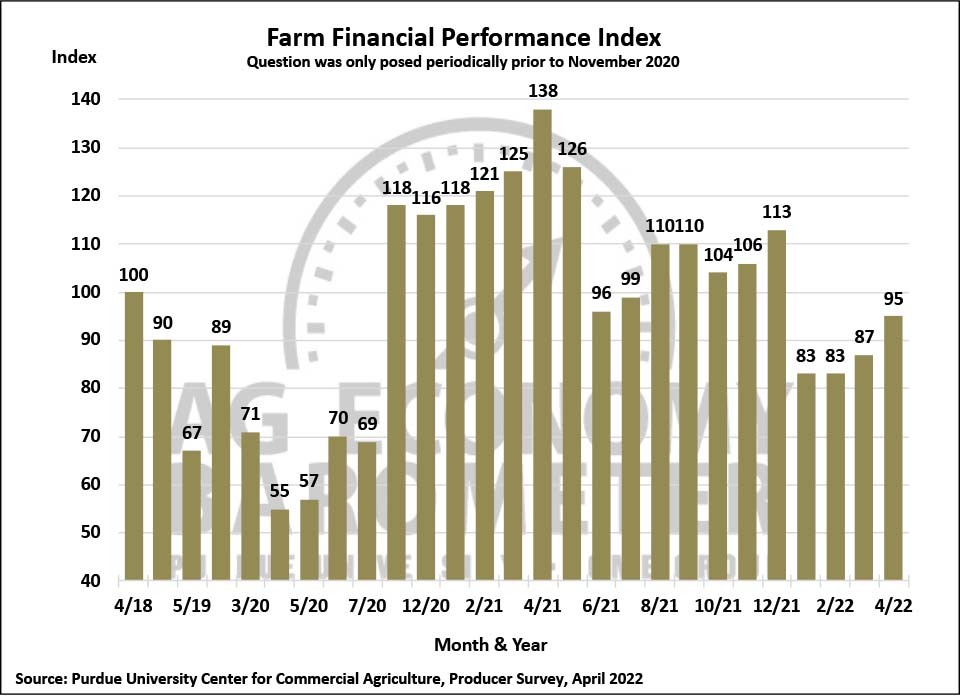 The Farm Capital Investment Index was unchanged in April, despite an improved financial performance outlook. April’s investment index reading of 36 left the index at it’s all-time low, one point below the previous low reading observed in May 2019. Follow-up questions revealed that producers were a bit less pessimistic in April about both their machinery purchase and new construction plans in the upcoming year compared to responses received in the March survey. But supply chain problems remain a key reason many producers feel now is not a good time to make large investments in their farming operation. Once again, just over 40% of producers said their farm machinery purchase plans were impacted by low machinery inventories. The rising cost of all inputs, including machinery, buildings, and grain bins, is likely another factor causing producers to say now is not a good time for large investments. 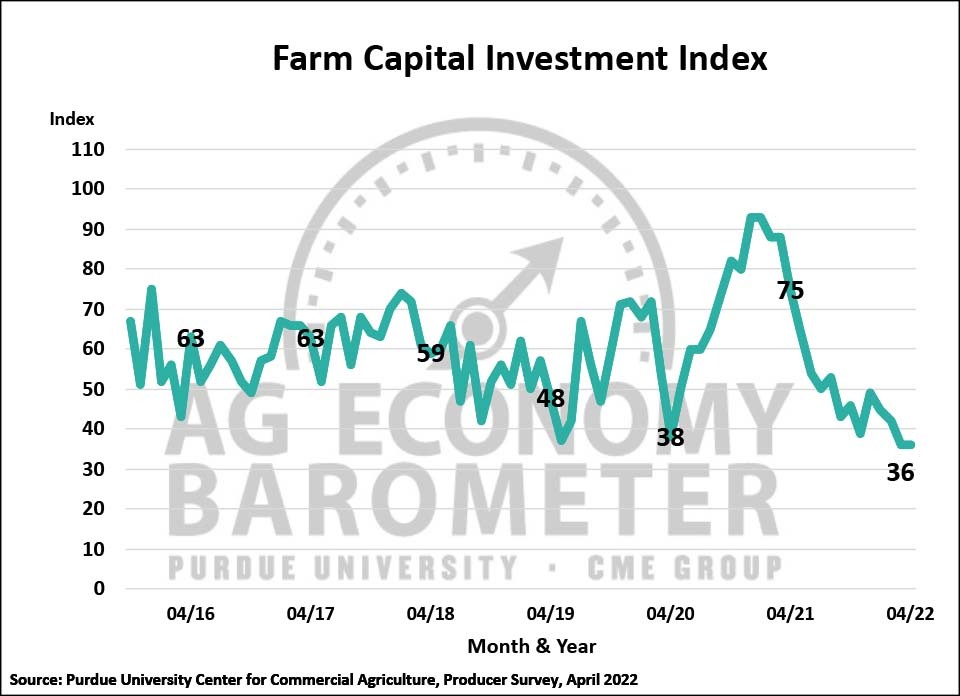 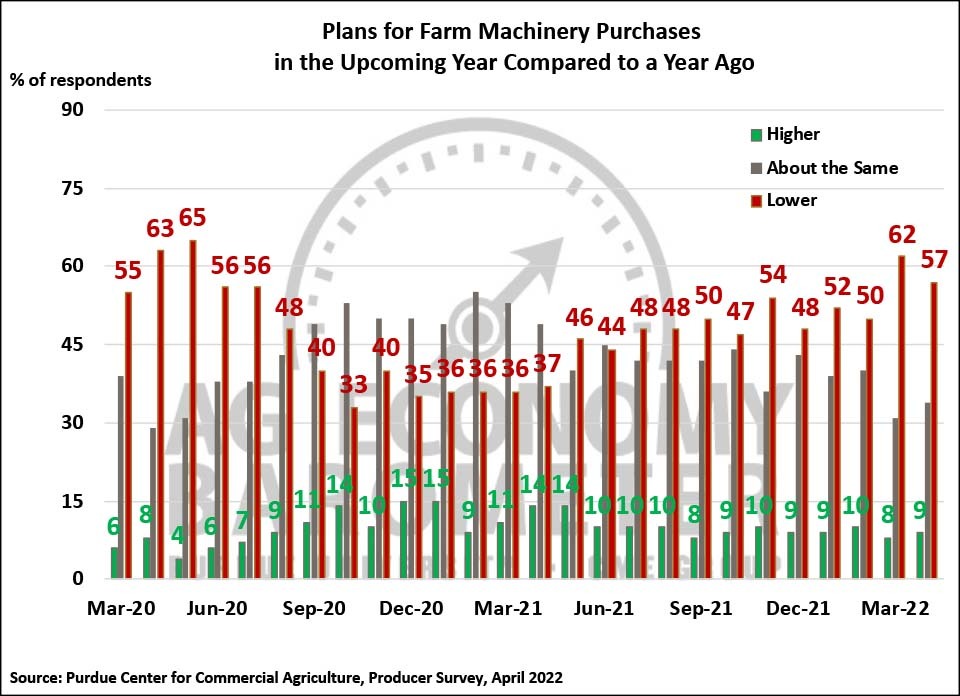 Figure 5. Plans for Farm Machinery Purchases in the Upcoming Year Compared to a Year Ago, March 2020-April 2022. 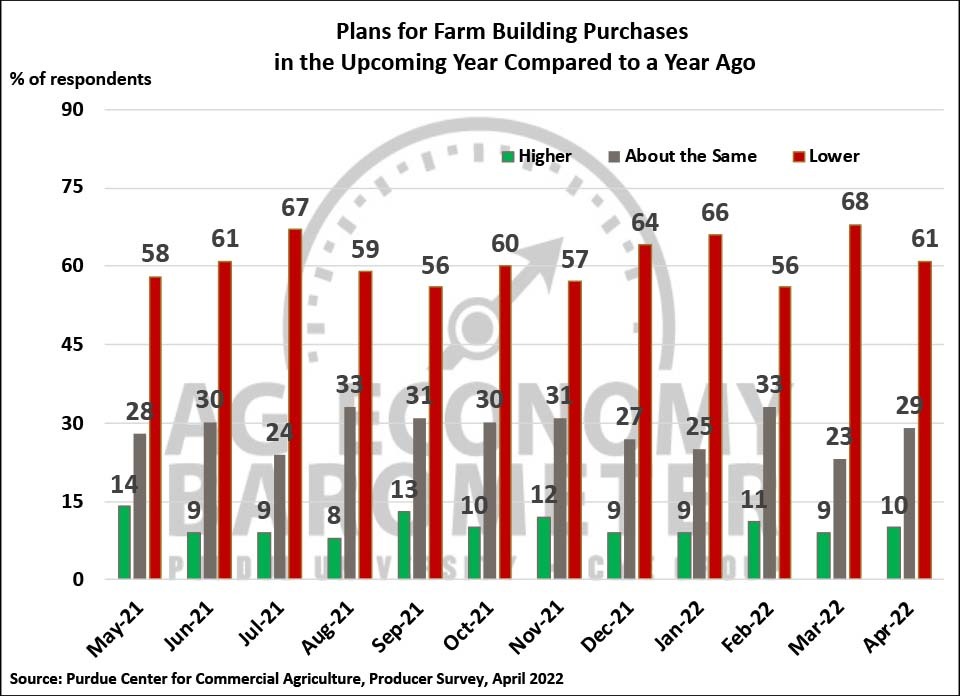 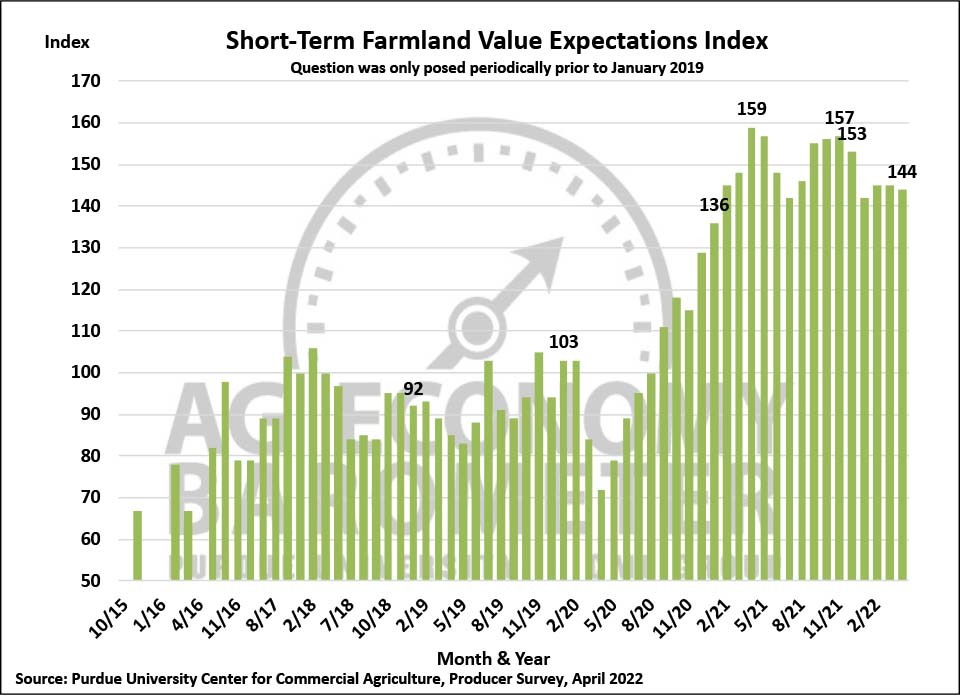 Both the short-term and long-term farmland value indices declined 5 points in April, leaving both indices at a reading of 141. Expectations for continued increases in farmland values appear to have peaked last fall. Three-month moving averages of both the short and long-term indices in April were 7 to 8% below the peak values reached in November. Responses to the 12-month ahead farmland value question since last fall reveal a shift among producers from expecting values to increase towards expecting farmland values to remain about the same. Looking at responses since November to the 5-year ahead farmland value question, the shift away from expecting higher values was split between producers who expect values to remain about the same and producers who expect values to decline. 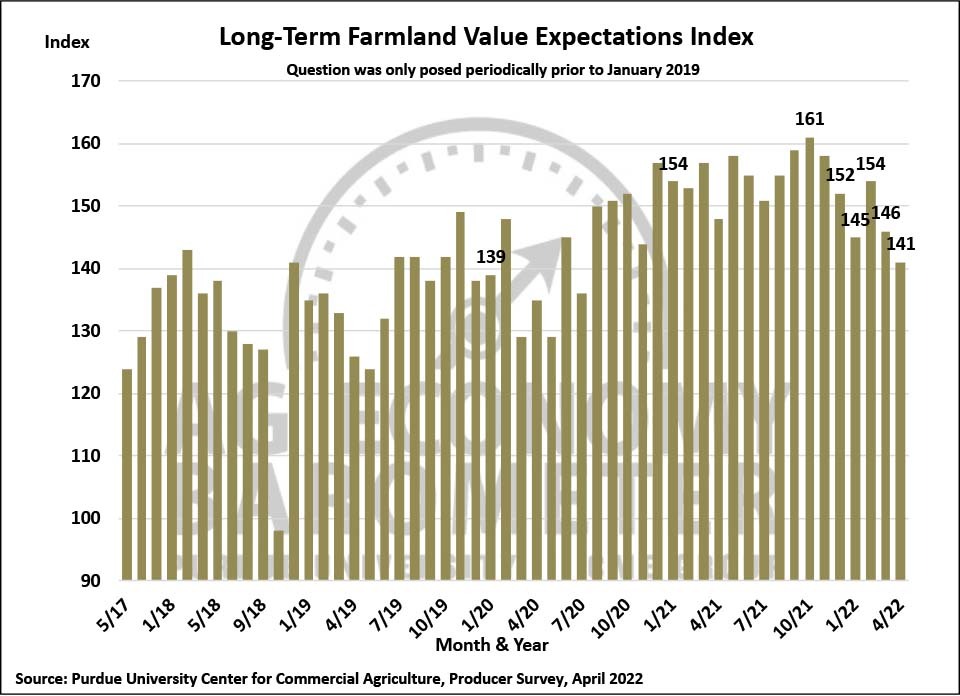 Ag producers financial performance expectations improved in April, largely as a result of strengthening commodity prices. In turn, expectations of stronger financial performance provided support to farmer sentiment, helping to push the Ag Economy Barometer up by 8 points in April. However, despite this month’s improvement in sentiment, the index was still 32% lower than a year earlier indicating producers remain troubled regarding the uncertainty surrounding input prices and availability. Looking ahead to 2023, over half of crop producers expect input prices to rise above 2022’s inflated level and one out of five crop producers expect input prices to rise 20% or more compared to this year. Just over one-third of crop producers reported having some difficulty purchasing inputs for the 2022 crop season while 11% of crop producers said that an input supplier told them they would be unable to deliver an input previously purchased for use this season forcing them to search for a substitute. Furthermore, it appears the war in Ukraine has exacerbated concerns among producers about input price levels and made availability even more uncertain.