The Purdue/CME Group Ag Economy Barometer settled lower in October. Based on a survey of 400 agricultural producers across the U.S., the monthly measure of U.S. agricultural producers’ sentiment was measured at 92, the lowest reading since March 2016 and the second-lowest Ag Economy Barometer value since data collection began in October 2015 (Figure 1). 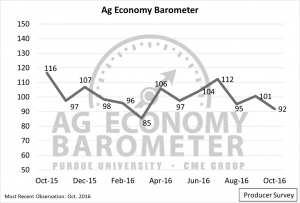 The decline in producer sentiment recorded during October was primarily driven by an erosion in producers’ perspective regarding the long-run health of the U.S. agricultural economy. The forward-looking component of the Ag Economy Barometer, the Index of Future Expectations (Figure 2), settled at 95 in October, down from 109 in September and well below its July peak of 121. 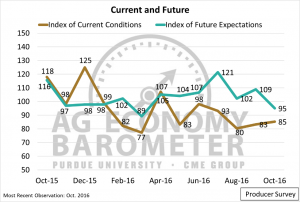 In the October survey, producers revealed strong pessimism about the agricultural economy’s prospects over the next 12 months. The share of respondents reporting that they expect bad times financially over the next 12 months rose to 79 percent in October, an increase of 11 percentage points from the September survey and 16 percentage points from October 2015. The change in perspective from October 2015 to October 2016 suggests farm financial conditions have weakened considerably since fall 2015. 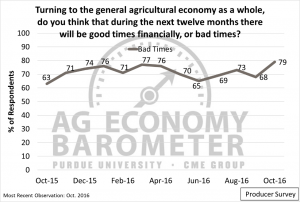 One-third of producers surveyed said they expect July 2017 CBOT corn futures prices to exceed $4.00 per bushel between October 2016 and next summer and a similar share of respondents (30 percent) expect July 2017 soybean futures prices to exceed $10.00 per bushel. Crop budgets for both of these crops suggest that futures prices at these levels for the 2016 crop would allow many Midwestern cropping operations to approach breakeven, especially given that many farms are harvesting above-average yields this fall. Farmers with this price outlook are likely those with an optimistic perspective regarding future financial conditions in the agricultural sector.

In contrast to the optimism expressed by some survey respondents, a slightly smaller share of producers think a much more negative corn and soybean price scenario is likely. Twenty-seven percent of survey respondents expect corn prices to fall below $3.00 per bushel and 25 percent of respondents expect soybean prices to fall below $8.00 per bushel. Corn and soybean prices at these levels are below breakeven for the vast majority of U.S. farm operations and farmers with this price outlook are likely those with the most dire outlook regarding future financial conditions in agriculture. 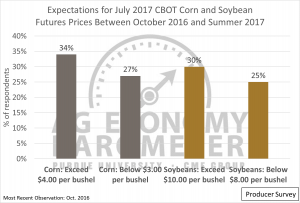 Producers were also asked about crop management changes they plan to make in 2017 as a result of farm economic conditions. Figure 5 provides the share of respondents planning to reduce fertilizer rates, reduce seeding rates, or change hybrid or seed variety trait packages in 2017. The most popular strategy reported by producers was lowering fertilizer rates, as 46 percent of respondents plan to employ lower rates in 2017. Thirty-five percent of respondents plan to adjust the trait packages of their hybrid or seed varieties, while only 19 percent reported that they plan to lower seeding rates in 2017. Survey responses indicate producers are making changes in their production practices in an attempt to reduce production costs as they continue to adjust to lower crop prices. 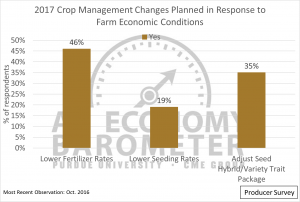 Given the tight budget conditions and deteriorating outlook for the future, producers also were asked if they expected higher commodity prices, lower variable expenses, or lower fixed expenses to substantially improve their farms’ financial situations in the next 12 months (Figure 6). Only one-fourth of the respondents expect enough improvement in crop prices over the next year to improve their financial situation and just over one-fifth of producers surveyed expect variable expenses to decline enough for it to have a substantial impact on their operation in the near-term. 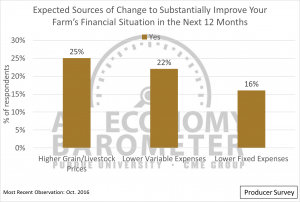 Figure 6. Respondents expecting various sources of change to substantially improve their farms’ financial situations in the next 12 months.

Each quarter, 100 agricultural thought leaders, including agribusiness executives, commodity association leaders, agricultural lenders and academics engaged in the agricultural sector are surveyed to gauge their perspective regarding the current state of the agricultural economy and future expectations. The Ag Thought Leader Survey provides an interesting opportunity for comparisons with producer responses, especially for key farm economy drivers. 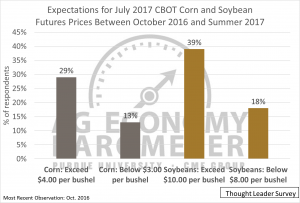 When thought leaders were asked about sources of improvement for producers’ financial situations over the next 12 months, nearly 45 percent thought lower variable expenses would provide relief and nearly one-third expected lower fixed expenses to help. In both cases, thought leaders believe expense reductions will have more impact on producers’ financial situation than producers expect. 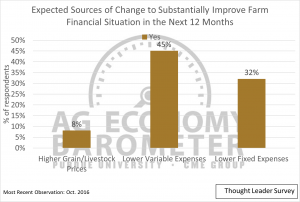 Figure 8. Share of thoughts leaders expecting various sources of change to substantially improve farm financial situations in the next 12 months.

A decline in producer sentiment regarding future prospects for the agricultural economy pushed the Ag Economy Barometer lower in October. The Index of Future Expectations has declined sharply since reaching its peak in July, suggesting producers are significantly less optimistic about future economic conditions in agriculture than just a few months ago. Both agricultural thought leaders and producers expect lower expenses to produce some improvement in producers’ financial condition in the year ahead, although thought leaders seem to think expense reductions will be larger and have more impact than producers think likely. Producers also indicated that they plan to change some of their production practices in 2017 in response to a challenging farm economy by reducing fertilizer usage, changing seed trait packages and reducing seeding rates as they look for ways to improve profitability.