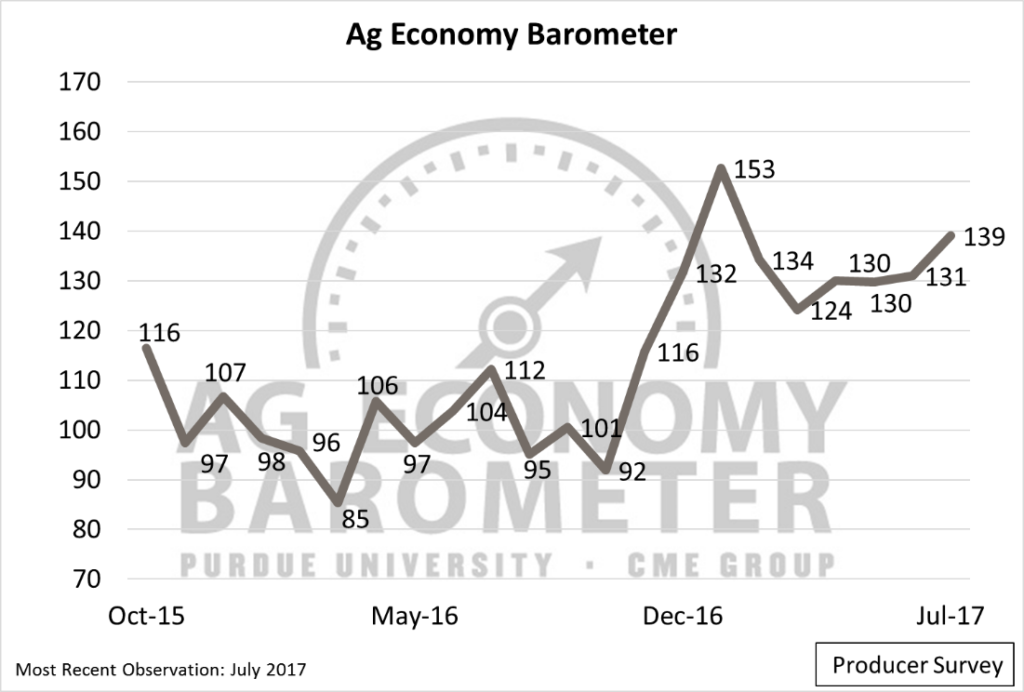 Continuing a trend that’s been underway for several months, the increase in the barometer was underpinned by an improvement in producers’ perceptions about current conditions in the ag economy. The Index of Current Conditions rose to 142 in July, up 10 points from June. The Index of Current Conditions in July was actually 24 points higher than it was in January, when the Ag Economy Barometer peaked (Figure 2).

Over a period of several months, a fundamental shift has taken place with respect to the primary drivers of producer sentiment. In the fall of 2016 and continuing into early 2017, improvements in farmer sentiment were motivated primarily by producers’ more optimistic views of the future, as measured by the Index of Future Expectations. However, since February, future expectations have mostly trended sideways. In contrast, the Index of Current Conditions has improved steadily in a trend that actually got underway last summer. The Index of Current Conditions has exhibited a month-to-month increase in nine out of the last 11 months. After bottoming out last summer with an index value of just 80, the Index of Current Conditions has climbed 62 points in the last year and in July was at its highest level since data collection began in October 2015. 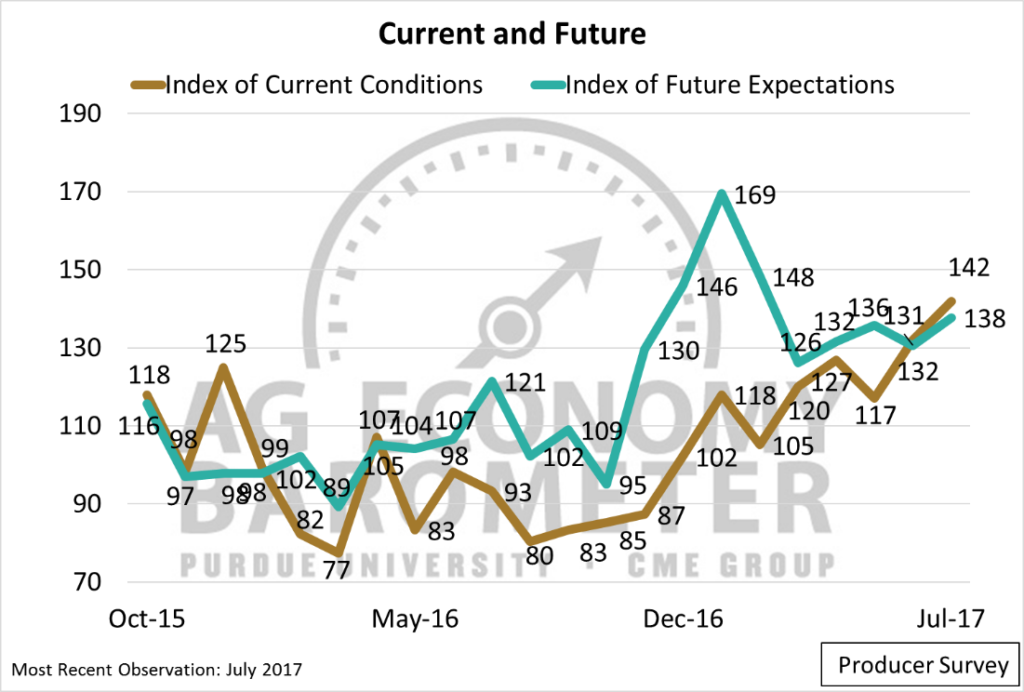 Figure 2. Index of Current Conditions and Index of Future Expectations, October 2015 to July 2017.

Part of the improvement in producers’ perceptions of current conditions appears to be the more optimistic view they have of key commodity prices. In the latest Ag Economy Barometer survey, we asked producers if they expect to see higher, lower, or about the same grain, oilseed and cotton prices in the next 12 months. This is a question that we pose periodically to producers in our surveys. On the July 2017 survey, it was clear that a much larger share of producers expect to see higher corn, soybean, and wheat prices in the year ahead than on prior surveys. The exception was cotton prices, a commodity for which price expectations actually declined from April to July of this year (Figure 3). For example, in July, 39 percent of respondents said they expect higher corn prices in the next 12 months, up from 24 percent in April 2017 and just 22 percent on the July 2016 survey. 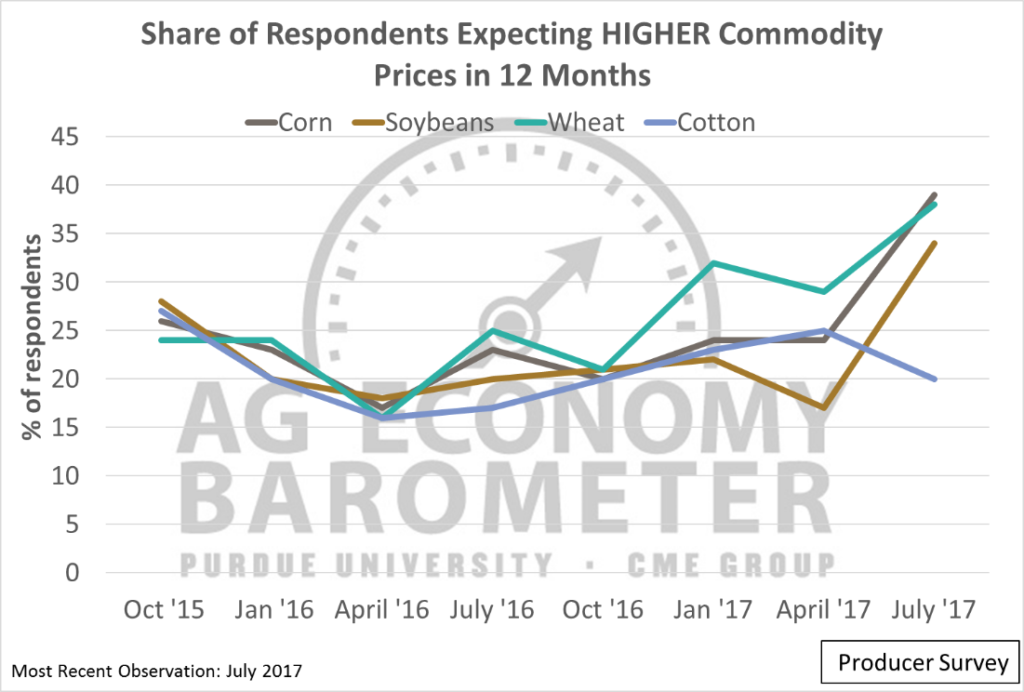 The improvement in producers’ expectations for commodity prices corresponded with early summer market activity. Wheat futures prices, driven by drought conditions in the Northern Great Plains, have been the most active, but uncertainty about the corn and soybean growing seasons has also contributed to market volatility. Corn futures prices, based on the December 2017 futures contract, traded down to a low of about $3.75 in late June 2017 to a high of more than $4.15 in early July over a span of just a few trading days. The upside price volatility appears to have helped boost producers’ price expectations. 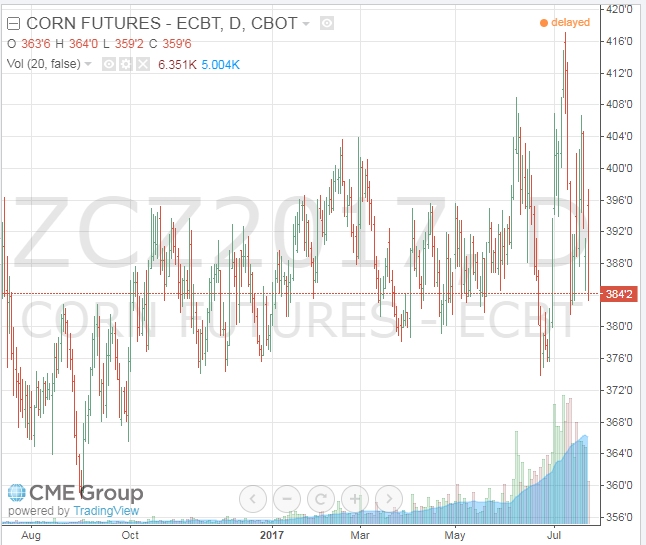 On the July 2017 survey, producers indicated that not only do they expect higher commodity prices 12 months from now, but they are also more optimistic about near-term price movement than they were earlier in the year. In January, April, and July of this year, we asked producers if they expect the December 2017 corn and November 2017 soybean futures contracts to trade above/below various price points. In July, 45 percent of respondents thought a corn rally above $4.25 per bushel was possible, a substantially higher share of respondents than felt that way in either January or April (Figure 5). Furthermore, fewer producers in July indicated that they expect December corn futures to fall below $3.50 per bushel than when we surveyed producers back in April. Similar results were obtained when we asked producers about their expectations for November soybean futures prices.

Finally, in July we posed a new question to agricultural producers related to their commodity price expectations. Specifically, we asked producers whether they thought the December 2017 corn futures contract exceeding $4.25 per bushel, or falling below $3.50 per bushel, before this fall, was more likely. Fifty-four percent of the respondents said that the December corn futures contract price exceeding $4.25 was more likely than falling below $3.50. 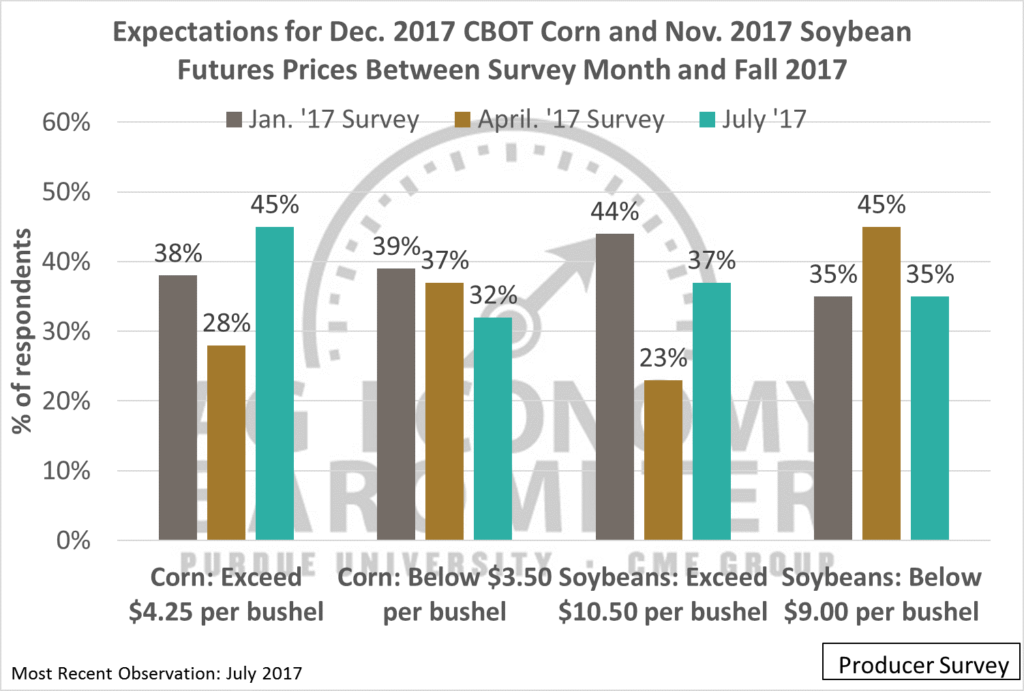 While the improvement in producer sentiment is impressive, it’s important to reflect on just how gloomy commodity price expectations were last fall. In October 2016 (reported in November 2016), producers were asked about their expectations about the July 2017 corn futures contract between October and summer 2017. Specifically, producers were asked if they thought corn prices, for the July 2017 futures contract, would exceed $4.00 per bushel or fall below $3.00 per bushel. One-third of producers thought a rally above $4.00 was possible, whereas 27 percent indicated a drop below $3.00 per bushel was possible. As it turned out, neither scenario occurred, but the December corn futures contract did trade near the higher end of the range, exceeding $3.90 per bushel In February, June, and July.

Farmer sentiment improved during July. Although perspectives on both current and future conditions combined to boost the Ag Economy Barometer in July, the biggest shift occurred in producers’ perspective on current economic conditions. Questions focused on commodity price expectations, both near-term and 12 months ahead, revealed that producers are noticeably more optimistic about grain and oilseed prices than they were earlier this year and in late 2016. In turn, the optimism about commodity prices appears to be a key factor influencing farmer sentiment regarding the ag economy.