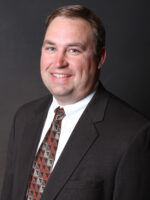 Professor and Senior Associate Dean and Director of Purdue Extension

Jason R. Henderson is Senior Associate Dean in the College of Agriculture and Director of Purdue Extension. In this role, Jason leads the statewide public engagement and research-based education in Agricultural and Natural Resources, 4-H Youth Development, Health and Human Sciences, and Economic and Community Development. As Assistant Vice President for Engagement, Jason provides leadership in university-wide initiatives designed to connect Purdue expertise and resources to statewide needs and forming effective partnerships to grow the state economy and improve the quality of life for Indiana’s residents.
Prior to being named Director of Extension, Jason served as Vice President and Omaha Branch Executive at the Federal Reserve Bank of Kansas City. In that role, he served as the Bank’s regional economist and representative in the state of Nebraska, recruited and worked closely with the Branch’s board of directors, and briefed the Kansas City Fed’s president—a member of the Federal Open Market Committee—on economic and business activity in the state. In addition, Jason led several Federal Reserve efforts to track agricultural and rural economies, including the quarterly publication of the Tenth District Survey of Agricultural Credit Conditions and the Federal Reserve System’s Agricultural Finance Databook. He also managed the Main Street Economist, a bi-monthly publication covering economic issues affecting rural areas, and the Nebraska Economist, a quarterly publication providing insights into the Nebraska economy. Previously, he served as economist and senior economist at the Federal Reserve Bank of Kansas City.
Jason is a nationally recognized expert in agricultural and rural issues. He has published more than 60 research articles in academic and Federal Reserve publications on topics such as land values, entrepreneurship, demographics, the growth of knowledge-based activity in rural America, the use of electronic commerce in agricultural industries, and the growth of value-added food manufacturing activity. Jason speaks frequently to a wide range of business, financial and policy audiences across the United States and internationally. His research on the agricultural and rural economy has been quoted by policy officials, researchers, and leading media outlets, including the Wall Street Journal, New York Times, Financial Times and USA Today. In addition, Jason has been interviewed on CNBC and Fox Business and provided testimony on agricultural credit conditions to congressional subcommittees.
He holds masters and doctorate degrees in agricultural economics from Purdue University and a bachelor’s degree in economics from Central College in Pella, Iowa. Jason was raised on a family dairy farm in Northeast Iowa.