Part the difference in land values reflects productivity differences. As a measure of productivity, survey respondents were asked to estimate long-term corn yields. The average reported yield was 103, 134, and 163 bushels per acre, respectively for poor, average, and top quality land. The value per bushel for different land qualities was very similar. Poor land was the most expensive at $19.07 per bushel. Top land had the lowest value at $18.59 per bushel and average land was $18.79 per bushel.

* Transitional land is land that is moving out of agriculture.

** The median value is the value in the middle of data that have been arranged in ascending or descending numerical order. 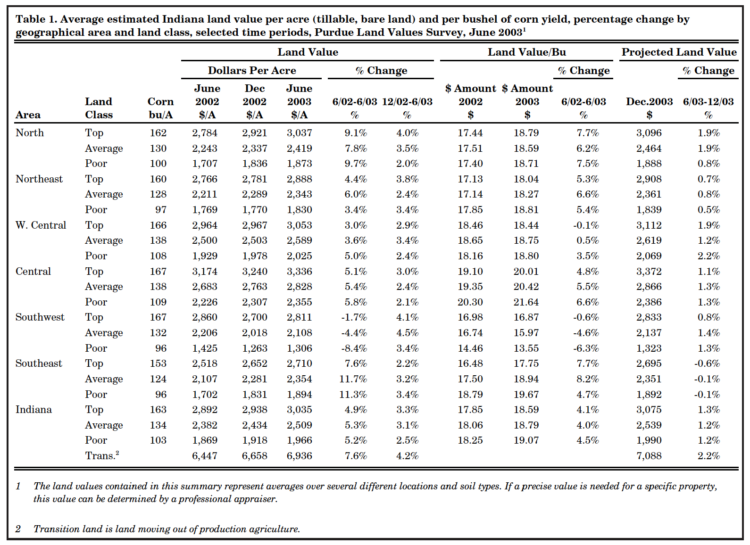 For the year ending June 2003, the change in land values ranged from a decline of 8.4% for poor land in the Southwest region to an increase of 11.7% for average land in the South-east region. In the Southwest region, the increase in value during the six-month period from December 2002 to June 2003 was not sufficient to off-set earlier reductions. All classes of land in this region declined for the year ending June 2003. The strongest increases for the year were in the Southeast region, ranging from 7.6%to 11.7%. This was followed by the North region with increases ranging from 7.8% to 9.7%.

Respondents were asked to estimate the value of rural home sites with no accessible gas line or city utilities and located on a black top or well-maintained gravel road. The median*** value for five-acre home sites ranged from $5,000 to $8,500 per acre (Table 3). Estimated per acre median values of the larger tracts (10 acres) ranged from $4,750 to $7,500 per acre. 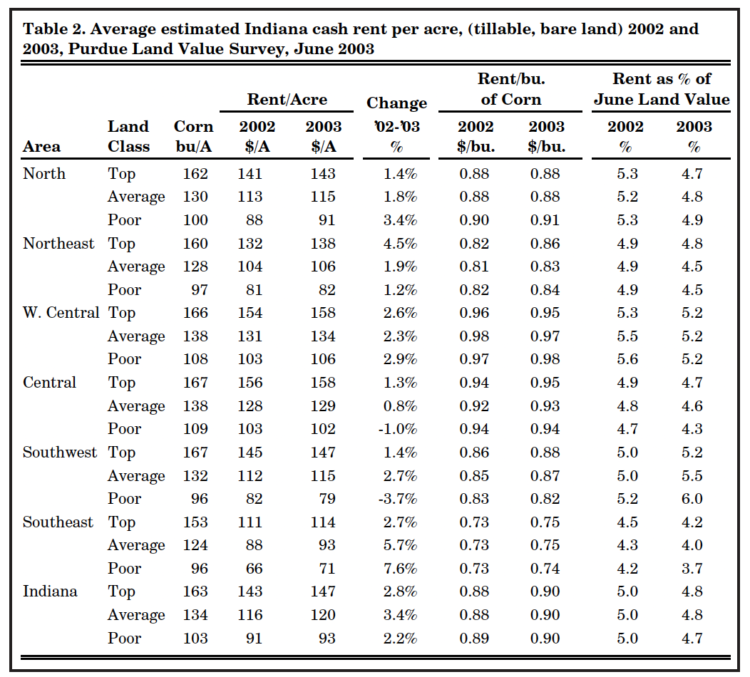 *** The median value is the value in the middle of data that have been arranged in ascending or descending numerical order.

All areas of the state reported increases in cash rent (Table 2). Only the Central and Southwest region reported a decline in cash rent. In both regions, the cash rent for poor land declined. The strongest increase in cash rent occurred in the South-east region.

Important Factors in the Land Market

Respondents were asked to provide their perceptions of changes in the buyers of farmland by indicating if purchases by farmers, rural residents, nonfarm investors, or pension funds had increased, decreased, for remained the same when compared to a year earlier. Demand from farmers and nonfarm investors have shown the largest changes. This year, just over 43% of the respondents indicated that there was an increased demand from farmers (Figure 4). This continues an upward trend in the number of respondents indicating increased farmer interest in farmland purchases.

Expected Corn and Soybean Prices, Interest Rate, and Inflation Expectations regarding crop prices over the next few years have a strong influence on farmland values because they affect expected revenues from the purchase or rental of farmland. In order to gain insight into price expectations, respondents were asked to estimate the annual average on-farm price of corn and soybeans for the period 2003 to 2007. Respondents have been asked to make these five-year projections since 1984. 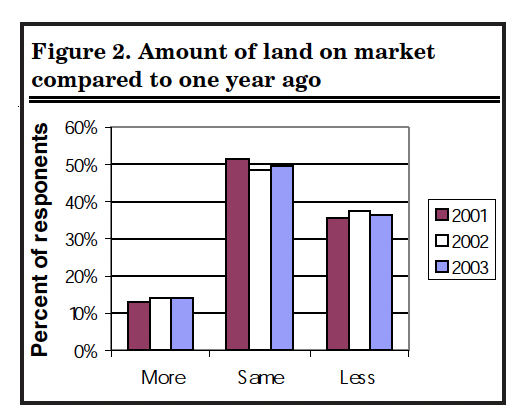 Figure 2. Amount of land on market compared to one year ago 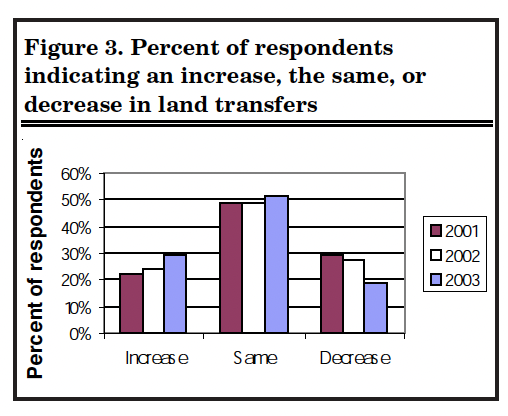 Figure 3. Percent of respondents indicating an increase, the same, or decrease in land transfers 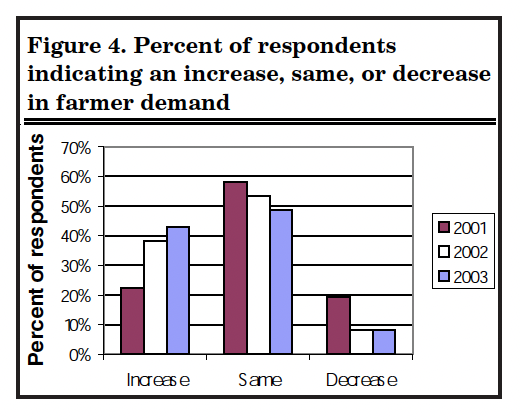 Figure 4. Percent of respondents indicating an increase, same, or decrease in farmer demand 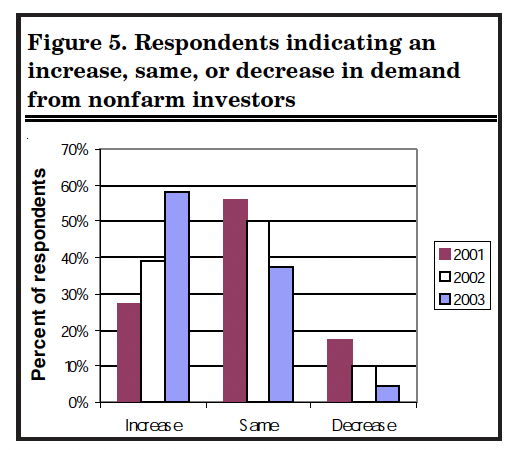 Figure 5. Respondents indicating an increase, same, or decrease in demand from nonfarm investors 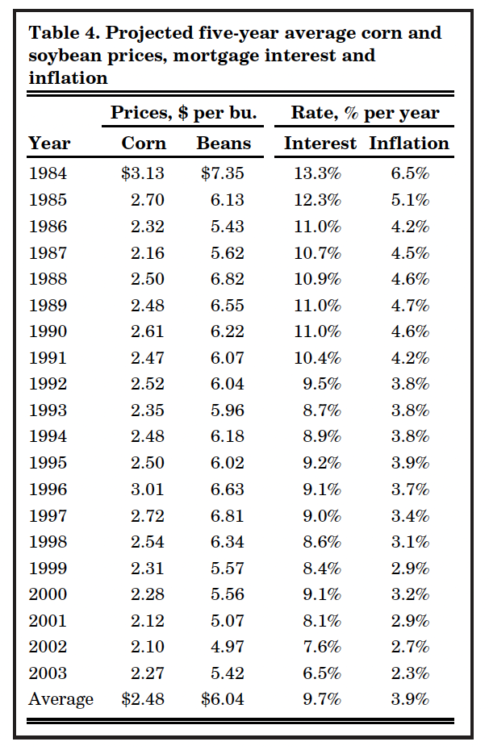 To obtain a more comprehensive assessment of the relative strength that various influences are currently exerting on farmland values, survey respondents were asked to assess the influence of 11 different items on farmland values. These items included:

Those items with the largest negative influences included current net farm income (1) and current livestock price level and outlook (4). The crop price level and outlook (3) and export sales (7) also have negative influences, but these are less important than in previous years. Those with the largest positive influences include current and expected interest rates (5), returns on competing investments (6), the current inventory of land for sale (9), the current cash liquidity of buyers (10), and the inflation/deflation rate (8). 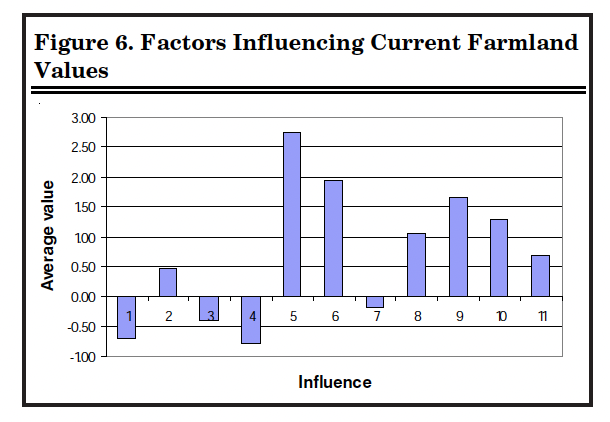 What about the Future?

The limited supply of land for sale combined with strong demand for country residences and nonfarm development, the strong liquidity of buyers, renewed interest by farmers and nonfarm investors in farmland purchases, and low long-term interest rates continues to provide strength to Indiana’s farmland market. When the long-awaited economic recovery of the U.S. economy begins, interest rates and the attractiveness of alternative investments are likely to improve. However, even with some increase in interest rates, the other factors supporting Indiana’s farmland market are likely to remain in place. When asked to project farmland values for December 2003, respondents expected farmland values in all areas except the Southeast to increase (Table 1). In the Southeast, respondents expected a small decline in farmland values.

Some people have wondered if the real estate market might be the next market bubble to burst. What could derail a continued increase in farmland values? One possibility is a sharp rise in inflation and interest rates because of the large federal budget deficit. A sharp rise in

long-term interest rates would slow development demand, provide more attractive alternative investments, as well as increase the cost of borrowed money. Another possibility could be a sharp drop in commodity prices do to a surge in world production. While this would reduce market revenues, the current farm program would offset lower market prices with increased counter cyclical payments. Still another possibility is a sharp rise in production costs. The tight supply of natural gas resulted in higher nitrogen prices this past spring. Natural gas supplies continue to be tight and may increase propane prices this fall. If these and other input costs rise, margins from crop production are likely to narrow, reducing the income capitalized into farmland values.

While the likelihood of these events or their impact may seem low, it is important to remember that a farmland investment is a long-term investment. Prudent planning requires investigating if there is a sufficient cushion to allow the business to withstand unexpected events that reduce net revenue. It is also important to remember that farmland is an illiquid investment. Selling a tract that should not have been purchased can often take longer than anticipated. If a farmland sale is planned, the data reported here provides general guidelines regarding farmland values. To obtain a more precise value for an individual tract, contact a professional rural appraiser.

The land values survey was made possible by through the cooperation of numerous professionals that are knowledgeable about Indiana’s farmland market. These professionals include farm managers, appraisers, land brokers, bankers, Purdue Extension educators, farmers, and persons representing the Farm Credit System, the Farm Service Agency

(FSA) county offices, and insurance companies. Their daily work requires that they stay well informed about land values and cash rents in Indiana. The authors express sincere thanks to these friends of Purdue and of Indiana agriculture. They provided 323 responses representing all but one Indiana County. We also express appreciation to Carolyn Hunst of the Department of Agricultural Economics for her help in conducting the survey. 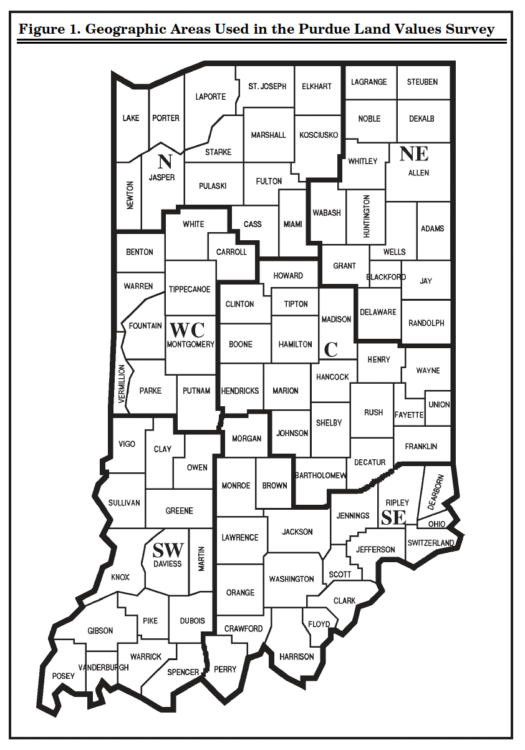