The pork industry experienced unprecedented disruptions during the outbreak of COVID19 that are still being felt into the fall of 2020.  Despite the shutdown of restaurants in mid-March, the run on grocery stores initially helped pull up wholesale pork and hog prices (see figure 1).  Shortly thereafter, however, farm-level and wholesale-level prices fell as the loss of demand from food service establishments took its toll.  Then in April and May, workers in pork packing plants began contracting COVID19, leading to plant slowdowns and shutdowns.  The worse of it occurred in late April and early May when the number of daily hogs slaughtered was 40% below the prior year’s levels. 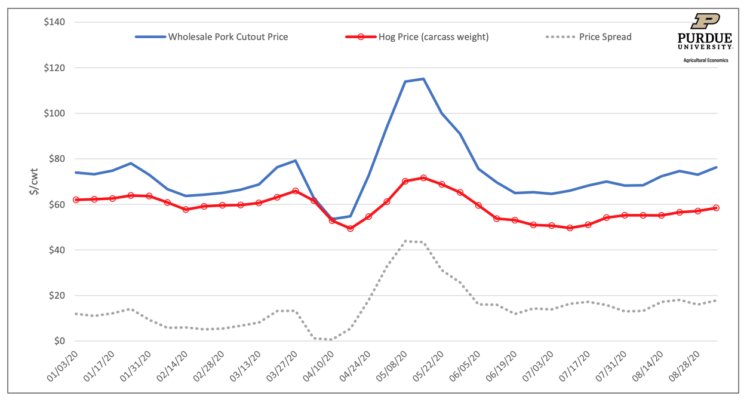 Such a massive disruption in the processing sector caused a significant widening between farm and wholesale prices, as shown in figure 1. Farm-level prices are measured on a carcass (or dressed) basis (the figure shows the national barrows and gilts weighted average base purchase price across all producer-sold hogs in the National Daily Direct Hog Prior Day Report–Slaughtered Swine (LM_HG201) report by the USDA-AMS and complied by the Livestock Marketing Information Center). The significant increase in the price spread in May is explained more by the increase in wholesale pork prices than a change in hog prices. The farm-to-wholesale pork price spread averaged about $9/cwt in January and February 2020, reaching a peak of almost $44/cwt in early and mid-May, a 388% increase.

The increased price spread during late April and early May has created significant controversy, primarily in the beef sector, but in the pork industry as well. The fact that wholesale meat prices can increase at the same time livestock prices are falling can seem almost paradoxical, but these divergent price movements have a straightforward economic explanation. When packing plants ceases operations due to worker illnesses, packers can’t take as many hogs. A plant closure results in an excess supply of hogs relative to the ability of packers to process them. Thus, plant closures cause a reduction in demand for hogs, and as a result, hog prices fall.

At the same time, a plant closure means fewer hogs being converted to ham and bacon. A plant closure results in less meat on the market. Grocers, restaurants, and exporters are left vying for a smaller amount of meat, which results in meat prices being bid up. That is, there is a reduction in meat supply. The combined effect of rising wholesale meat prices and falling livestock prices results in an increasing price spread.

Because the majority of hogs are not sold in negotiated markets, but rather are sold on contract, many hog producers are not directly affected by the adverse movements in hog prices witnesses during parts of this spring and summer. The main adverse impacts to many producers have resulted in the backlog of hogs on farms that occurred as a result of the slowdowns and shutdowns in packing plants, as producers had to euthanize animals, extend feeding periods, or delay the arrival of new feeders. Figure 2 shows the number of weekly hogs slaughter since the first of the year. The significant drop-off that occurred starting in early April is apparent. In addition, the figure shows an estimate of the backlog of market hogs on farms that occurred as a result of the plant shutdowns and slow-downs. The estimate assumes no hogs were euthanized and that processing would have occurred at the same levels of January and February 2020 (after adjusting for typical seasonal swings) had COVID19 not occurred. The estimated backlog peaked at about 3.5 million hogs at the end of May, equal about 1.3 weeks worth of normal processing capacity. Resumption of processing and extra Saturday operations enabled packers to reduce the estimated excess inventory to about 1.5 million hogs by the end of August. However, the excess hogs in that remain in the system are likely continuing to put downward pressure on hog prices.

The biological lags in hog production, which include a little over three months in gestation and roughly six months of feeding, mean it will take some time to work through the COVID19 disruptions. Decisions to delay breeding or liquidate sows during the worst of the COVID19 shutdowns will likely help further reduce the backlog in the months ahead. These same decisions will likely imply a smaller market hog supply, and thus possibly elevated hog prices, around the end of 2020. 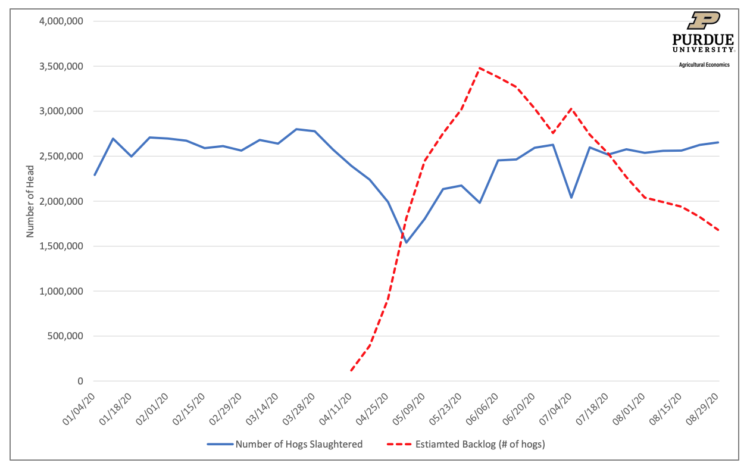 A standard measure of financial performance most commonly used for stocks is the price to earnings ratio (P/E). A high P/E ratio sometimes indicates that investors think an investment has good growth opportunities, relatively safe earnings, a low capitalization rate, or a combination of these factors. However, a high P/E ratio may also indicate that an investment is less attractive because the price has already been bid up to reflect these positive attributes. This paper computes a ratio equivalent to P/E ratio for farmland, the farmland price to cash rent ratio (P/rent), and discusses trends in the P/rent ratio.