When They Speak, Policymakers Listen


Purdue faculty and alumni inform agricultural policy across the globe


"I was doing some work in Lebanon, and the Minister of Trade and Industry there asked me to take a look at a policy issue for him.”

It’s an impressive opening until you spend a few minutes talking to Wally Tyner and realize this is how a lot of his stories start: with him advising top policymakers across the globe.

As a seasoned faculty member and the James and Lois Ackerman Professor of Agricultural Economics in the Department of Agricultural Economics, Tyner analyzes the intersections of agricultural, climate, trade, energy and natural resource policies. His research spans issues from disruptions in the trade of domestically grown soybeans to the viability of the electric car in California. It also informs his role as a trusted advisor to politicians and major international organizations like the World Bank.

Tyner’s stories not only often begin in a similar fashion, they almost always end with the same response. He says officials and politicians all just want to know what the best alternative is. “My response is always that all alternatives have consequences, and my job is to convey to them the consequences of the alternatives to provide them a basis for making good decisions.”

In other words, he provides information — laying out different policy options and their corresponding outcomes. For years, Tyner was a key advisor to Senator Richard Lugar on energy policy issues, and the senator named Tyner his June 2007 Lugar Energy Patriot for his sound and unbiased policy research.

The “alternatives and consequences approach,” pioneered in the 1930s by Department of Agricultural Economics faculty members John Kohlmeyer and J. Carroll Bottum, infuses much of Tyner’s teaching. It’s also a mindset the department is passionate about passing on to junior faculty and students.

“I tell my students that our job is to narrow the uncertainty,” Tyner says. “Agricultural policy is political, in many ways more than anything. All you can do is inform the process and at the end of the day, the decisions will be better because we’ve done that. They may not be perfect, but they’ll be better.”

Ted McKinney (BS ’81, agricultural economics), undersecretary of trade and foreign agricultural affairs for the United States Department of Agriculture (USDA), says this approach was central to his education and continues to influence his decision-making process.

McKinney began his career in the private sector, working in the policy and regulatory areas of agricultural crop inputs, biotechnologies and animal health products. He then entered public service, first as director of Indiana’s State Department of Agriculture and now in his current role with the USDA.

Every day, McKinney says, he sees the intersection of agriculture with other contemporary issues: trade, biotechnology, broadband access and food insecurity. Even the current opioid crisis, in certain areas, can be traced to issues of healthcare access facing rural, agricultural communities.

“I tell my students that our job is to narrow the uncertainty.” WALLY TYNER

“Among farmers and rural communities, doctors and healthcare facilities are far fewer, but it’s here we’re seeing the opioid issue,” McKinney says. “You marry broadband access to rural health and we’re talking about saving human lives. Rural access to high-speed internet could be the next wave of technology to enhance rural America.” In the short term, McKinney adds, better internet access can help deliver services like telemedicine and online counseling. And if you take a longer view, high-speed internet means better access to educational and business opportunities, from attending Purdue University Global to utilizing drone technology in monitoring crop health.

“Rarely do agricultural policy and economics, especially at the macro level, not intersect with other policy areas,” McKinney says. “That is the benefit of an iconic agricultural economics program like the one at Purdue — they offer the chance to grow and find yourself on yet another intellectual plane.”

It’s also the benefit of having an agricultural economics department situated within a world-class college of agriculture, Tyner adds. In a perfect world, research informs policy and vice versa, and that relationship is evident within the college.

“Societal problems don’t fall into disciplinary boxes,” Tyner says. “If we really want to tackle societal problems, we have to bring in engineers, earth and atmospheric scientists, whoever. We all have a different take. It’s harder, but the rewards are greater.”

Like McKinney, William Hoagland (BA ’69, agricultural economics), senior vice president of the Bipartisan Policy Center in Washington D.C., says the methods he gained at Purdue have always steered his approach to policy analysis and development. Hoagland has worked closely with members of Congress, usually advising on issues of domestic food security, food production and the efficacy of government programs like SNAP (Supplemental Nutrition Assistance Program). He also served as director of the Senate Budget Committee for many years.

Hoagland made a name for himself as head of the USDA’s Food and Nutrition Service, overseeing federal food assistance programs, including the food stamp program (now SNAP). With the expiration of the 2014 Farm Bill, the program is back in the spotlight. “The current Farm Bill will get hung up, and one major hang-up will be over SNAP,” Hoagland said in early fall — and his prediction was right.

Hoagland says he thought many times about running for office, especially when his career was starting out and he was a staffer working on Capitol Hill. He found himself surrounded by Kennedys and Rockefellers and other big names that had rolled off radio and TV sets all his life. “I was a bit starstruck,” he admits.

The luster of elected office quickly wore off, however, and Hoagland soon found his niche working behind the scenes to inform social and fiscal policy. According to Hoagland, having staffers and advocates who can effectively and impartially make policy evaluations is essential to the democratic process.

“You see a lot of people taking a lot of heat today in politics. I see polls suggesting that people are losing faith in the democratic process and their lawmakers. I think that’s sad and it’s dangerous,” he adds. “Even these big political names, they are just human beings and they want the best information and advice they can get.”

Tyner knows this frustration well and recollects more than one occasion where a lawmaker has supported, from his perspective, a poor policy move. “Sometimes decision-makers aren’t going to make the decisions we would make,” he says. “That’s why there’s a division of labor.” 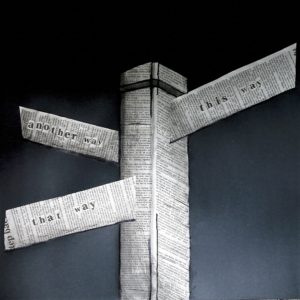 He views Purdue as a major driver of agricultural and economic policy, not just because of the experts it employs and produces, but also because Extension allows Purdue faculty and specialists to take the pulse of people who will most be impacted by economic changes and shifts in domestic and state agricultural policy.

“We do a lot of analysis about the impact of policy shifts,” Henderson says. “We try to provide the best research and evidence-based information so lawmakers can make better policy decisions. We do not advocate; we come at this from an educational perspective.”

Henderson says Extension works closely with state and county lawmakers in helping to demystify how certain policies have played out in Indiana and how to strengthen emergent policies.

“Recently, the legislature asked us to conduct an analysis of what every county had in terms of ordinances for CFOs [confined feeding operations],” Henderson explains. “They provided us some funding to do that work for them, which we did over the next two years.”

Henderson adds that Extension uses its local networks to provide educational training. For example, Extension takes on components of SNAP education within Indiana and also assumes responsibility for training farmers and agriculturalists so they can comply with federal regulatory standards.

It’s an interesting position, Henderson says, to be an organization that simultaneously informs policy and attempts to translate it for the masses — but, ultimately, it works.

“It works because of our integration with researchers on campus,” Henderson says. “We are able to bring that information out in a direct fashion, to the public, to lawmakers. Because we focus on doing projects and evaluations at the research level, we can also evaluate the programs we run, like SNAP education. It’s a good marriage.”

McKinney, who interacts daily with agricultural policy specialists, says it’s this integration among university, Extension and Hoosier farmers that allows Purdue’s College of Agriculture to continually turn out drivers of agricultural and economic policy.

In a complex global economy, how do we estimate the short- and long-term effects of trade agreements and tariffs? How can we predict the impacts on employment or consumer prices?

Thomas Hertel founded the Global Trade Analysis Project (GTAP) in 1993 to help answer questions like these. Hertel, distinguished professor of agricultural economics and the program’s executive director, developed GTAP to find a common language that economists around the world could use to discuss trade issues. Thousands of researchers, policymakers and analysts around the globe use the collected data and its models.

“We focus on developing the best possible tools for policy analysis and leave it to the political process to work out the actual policies that get implemented,” Hertel says.

And with the recent shift in U.S. trade policy, Hertel adds, GTAP data have buttressed many of the estimates used by the media and made by policy advisors.

“With the recent trade policy reversals by the U.S. government, the demand for GTAP has increased dramatically,” Hertel says. “GTAP was used by tariff advocates to estimate how high the steel tariffs should be to achieve steel industry objectives. And it was used by tariff opponents to estimate how many downstream jobs would be lost as a consequence of higher input prices and how much more consumers would have to pay for their purchases.”

GTAP’s data and models are relied on largely because of this impartiality and the trust it engenders. “GTAP data and analysis are often used to inform arguments on both sides of a debate,” Hertel says.