One aspect of agriculture that isn’t always readily apparent is its political side — fighting for farmers’ rights, lobbying for beneficial legislation and telling the story of rural America. Two of Indiana’s storytellers work every day to represent the farmers who help feed the world. 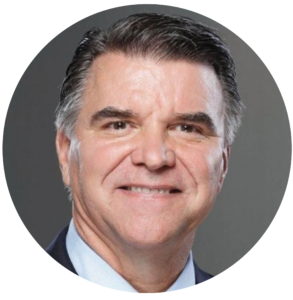 Chuck Conner was never a stranger to Purdue — growing up on a farm in nearby Benton County ensured his vocabulary included “Go Boilers!” from a young age.

“From the time I was born I felt like I was a Boilermaker,” Conner says, “and going to Purdue was almost expected, and a natural thing for me to do.”

His time on the family farm helped steer Conner toward his major, agricultural economics, and gave him the background he needed to empathize with the farmers he now represents as president and CEO at the National Council of Farmer Cooperatives (NCFC). Though he wasn’t a perfect student at Purdue, Conner says he enjoyed his studies, and discovered a newfound passion for a side of agriculture to which he hadn’t been exposed.

“My classes at Purdue gave me a passion for a lot of aspects of agriculture.”

One aspect of agricultural policy that rural life on a farm didn’t prepare him for was the intense networking one has to do when working in politics. “You need to know a lot of people in order to survive in this business,” Conner explains, “and some of my very first jobs that I had were with other Purdue people who mentored me and helped me understand this business. Just that relationship of having Purdue University common to us really benefited my career.”

After a short stint as an agricultural loan officer post-graduation, Conner pursued work in agricultural policy in Washington, D.C. “That’s almost 38 years ago,” Conner remarks. Those years included work for Senator Richard Lugar, The Corn Refiners Association and the U.S. Department of Agriculture. His current position put him in contact with his “Now” counterpart, Shelby Swain Myers, who interned at the NCFC.

“She was a great intern,” Conner says. “I could see immediately, not only from her internship but also from … Shelby’s entire experience here and her summer intern program, that her passion is really about telling the story of American agriculture.” 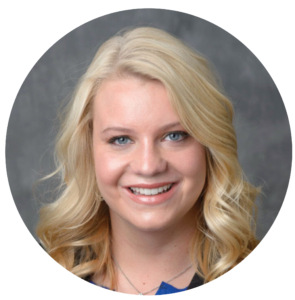 The experience that first prodded Shelby Swain Myers toward working in agricultural policy didn’t happen in a dusty barn or political office, but instead at the 2012 Super Bowl Village in Indianapolis.

“We were downtown,” Myers says, “and we ran into someone from the Indiana Soybean Alliance. My dad introduced me and we chatted some. As we were walking away I said, ‘What on earth is she doing at the Super Bowl?’”

“Well, Indiana is on display,” her father explained, “so Indiana agriculture needs a voice here too.” Her immediate response was, “I need to be doing that!”

That interest in agriculture policy blossomed when Myers started classes in agricultural economics at Purdue. In 2014, she connected with the National Council of Farmer Cooperatives with the help of the College of Agriculture’s Public Policy Internship Program.

“Don’t be afraid to say yes to any opportunity that comes your way.”

— (Her favorite piece of advice from her boss at the NCFC, Chuck Conner)

“The Ag Alumni Association actually paid for my housing and a stipend for me to live in Washington, D.C.,” she explains.

While interning, Myers found she enjoyed working on issues that impacted agriculture, such as the farm bill and GMO labeling. That passion helps her in her current job as associate policy advisor for Indiana Farm Bureau.

Though she likes talking personally with legislators, the best part of her career is empowering farmers as advocates. “My favorite thing is to work with members to hone in on what they want to tell their legislators and members of Congress,” Myers emphasizes, “so that their stories are being heard appropriately.”