We want to feed the world. But how? 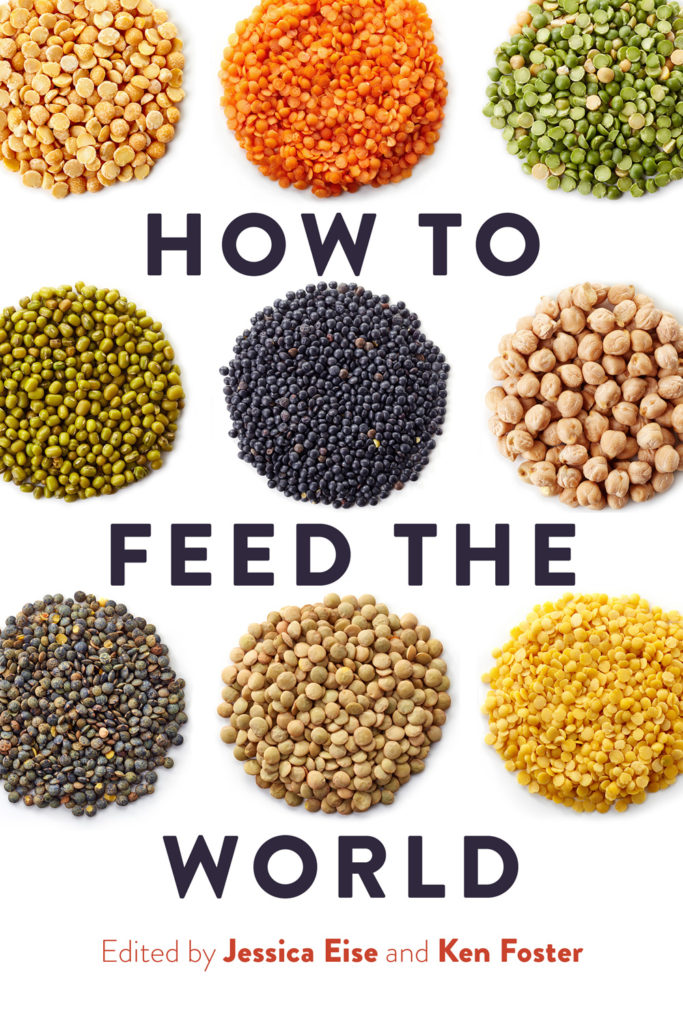 You may have read the prediction that by 2050, we’ll have 10 billion people to feed across the globe while facing increasing environmental change. It’s a daunting task but a solid wager that we have the tools and ability to address this challenge. To do so, we need a clear understanding of the threats and opportunities present in our food system.

Cooperation among farmers, scientists, policymakers, educators and consumers is key to reaching this ambitious goal. How to Feed the World, edited by Jessica Eise, Ross Fellow in the Brian Lamb School of Communication, and Ken Foster, professor of agricultural economics, helps readers connect global issues to our tangible, day-to-day existence.

“Malnutrition and food insecurity begin at the household level, when people are either unable to grow nutritious food, unable to buy nutritious food, or both,” says Gerald Shively, professor and associate department head of agricultural economics and one of the book’s authors. “Both often have complex causes, and How to Feed the World examines these causes and the challenges associated with overcoming them.”

When it comes to what we eat, we don’t all see things the same way. We have different views of animals and species of animals, as well as personal and cultural attitudes toward food production.  In this excerpt from How to Feed the World, Nicole Olynk Widmar, professor of agricultural economics, explores the issue of our power as a society to grant social licenses to operate. Can we do so responsibly and with an attitude of tolerance towards different preferences?

Excerpt from Chapter 10: Social License to Operate, by Nicole Olynk Widmar, in How to Feed the World (pages 165–169).

Cultural norms vary across the globe. Can we work across our differences?

Gestation crates were and are legal, and there aren’t any government sanctions against them.1 Their use did and still does comply with food and health standards. So why then did McDonald’s announce it was going to phase out pork from farmers using this system? The decision would be costly and, given the scope of McDonald’s and the amount of pork they purchase, the move carries major ramifications for farmers and production systems.

In a nutshell, the decision was driven by pressure from the public. Patrons of McDonald’s exercised their discretion as consumers. Government regulations and rules weren’t enough. They communicated that they would not purchase a certain product for reasons beyond those generally mandated. Consumers didn’t like the use of gestation stalls, perceiving them to be bad for the welfare of the pigs, and McDonald’s felt that pressure. So they acted.

Today, there is an abundance of examples in which food products are phased in or out of favor based on production system attributes, such as, in this case, an animal housing system. These attributes are beyond what is governed by regulation or traditional legal structures. We, the consumers, wield our purchasing power to influence the business decisions of major agglomerations. We make it clear what is, and is not, acceptable beyond what is required by law.

We are all familiar with the concept of a license. Some body, usually the government, grants us approval to do something. Probably top of mind is a driver’s license. We pass a written test and a driving test and prove our identity to the government, they issue us a license to drive. We are then legally sanctioned to be out on the roads. Doctors, lawyers, and a range of other professionals pass a regulated exam to receive a license to practice.

In addition to legal licenses there are also social licenses. Members of a society grant, or revoke, the privileges of a business, individual, or institution to exist or operate within said society. This concept is commonly known as a social license to operate. McDonald’s can’t stay in business without an actively engaged and happy group of Sausage McMuffin lovers. They won’t generate the profit they need to continue operating, even though they may be meeting all the legal standards and regulations to remain in business.

The so-called social licenses to operate have been commonly discussed in recent media around issues ranging from mining2 to food safety.3 The license is granted and revoked based on concepts, values, tools, and practices that represent a way of viewing reality for an industry and its stakeholders. If the concepts, values, tools, and practices of a company aren’t acceptable to an influential enough swath of society, then their social license to operate is at risk. If we state loudly enough, whether with our words or with our purchasing power, that what they’re doing is not okay, and if enough people get behind us, we wield the power to grant, or revoke, a company’s social license to operate.

At one time, finances were the primary driver of the decisions made by a business or organization. Today, however, social license to operate has become a vision of how to move forward with new projects. It adds a new dimension of acceptance. For example, if a community doesn’t support the development of a mine, it doesn’t matter how high the commodity prices are. There is no guarantee a positive production or development decision will be made.4 If production is morally or ethically unacceptable to society, production either won’t happen or will struggle mightily.

Our ability to influence decisions and control social licenses is both a right and a privilege. Yet inherent in this is a frequently overlooked and grave challenge. We don’t all see things the same way. For instance, we have different views of animals and we have different views of various species of animals. Different cultures view food production issues differently, and even different people view food production issues differently. Additionally, we often run the risk of becoming swept away in moral outrage before we have appreciated the full picture.

Using our power to revoke and grant social licenses to operate carries consequences. We can do great things with it. We can also do harm. For instance, failure to understand and appreciate differences in opinion and the nuances of a situation has the potential not just to challenge and disrupt trade relations but also to fuel social discontentment. Interrupted trade and social discontent are serious things indeed when it comes to food security. And thus, our capacity as a society to grant social licenses to operate faces a unique challenge. Can we do so responsibly and with an attitude of tolerance toward different preferences? Can we support, or at least grant social licenses, to organizations (or industries) moving the needle toward positive outcomes deemed advantageous or improvements over the status quo? Or will we become so stubborn in the righteousness of our beliefs that we disrupt, interrupt, and diminish our capacity to feed the world?

It Is More Than Just Food

Caviar and champagne are the food and drink of the wealthy. Orange Crush and white bread smeared in generic grape jelly are sustenance of the poor. Craft beer accompanied by quinoa and tofu sprinkled with cilantro and a smattering of sun-dried tomatoes drizzled in extra virgin olive oil with a dusting of fresh ground white pepper is, naturally, manna of the hipster.

Food represents status symbols, whether we are attuned to it or not. By a glance, whether subconsciously or with full awareness of our critique, we garner facts and details about an individual’s socio-economic status. These status symbols are not universal; they vary across cultures and regions. What denotes wealth and prosperity in one place may do the opposite in another. What symbolizes prestige and status in one country may be meaningless in the next.

Then, of course, there are the rituals, celebrations, and religious beliefs. Turkey for Thanksgiving. Cake and ice cream on your birthday. Brats and burgers on the Fourth of July. Pancakes on a Saturday morning. A big roast for Sunday dinner.

Already, food has become something far more than a means of sustenance. It has become an indicator of wealth and poverty, of culture and belief systems. Loaded with far more than calories, it is an entire sociological analysis of self.

This applies even beyond the food itself to include how we consume it. Lack of knowledge on how to eat “properly” is a universal sign of “outsider status.”5 Consider tea services and table settings. These intricate settings and ceremonies readily reveal the uninitiated. We may use the improper fork, partake from the wrong water glass and bread plate, or botch the timing of the meal. Even knowledge of food, without a scrap of food in sight, is often perceived as a signal of prestige or class. For example, a knowledge of foreign foods may signal one’s cosmopolitanism.

And so, it becomes clear how incredibly fraught food is with symbolism of status and identity. It leaps far beyond a simple source of energy for keeping ourselves moving throughout the day to create a stamp of self. It reveals our morals and ethics, our religion and wealth, our health status, our nationality, and our education and experiences.

We have a clear interest in our food even when there’s no need for us to be involved with its production. Given this attachment in terms of tradition, ritual, culture, it’s no wonder we have an innate desire to understand the processes that contribute to its existence. It’s no surprise that support of life movements, such as slow food, raw food, and local food, have gained traction. And even without a “branded” or recognized movement, plenty of people are deeply devoted to personal systems, such as the home-cooked meal, made-from-scratch baking, home canning and preserving, and even vacations or travel devoted to cooking and eating.

Much of our direct involvement in food production has diminished. Where once most people worked in agriculture and food production, now only a slim portion of the population does so. Yet our interest in food has not diminished in the slightest. For many, this interest has been reallocated to understanding and, in some cases, influencing, how food is produced and brought to the marketplace.

From How to Feed the World by Jessica Eise and Ken Foster. Copyright © 2018 by the authors. Reproduced by permission of Island Press, Washington, D.C.