In his youth, Barny Dunning and his fellow Boy Scout friends made a goal of earning all the nature-related merit badges the program offered. After poring over the requirements for each, they decided to start with Bird Study.

It was the easiest of the badges, Dunning recalls, so the thought was to pick the low-hanging fruit and move on.

Dunning remembers walking with a guide through a local park, spotting birds he’d never noticed and memorizing their vocalizations. He jotted down observations in a small notebook and finished the requirements for the badge.

The scouts moved on to other badges, but Dunning found himself back in that park and others. Fascinated by birds, Dunning became a wildlife ecologist and is now a full professor at Purdue. That’s in addition to countless hours he’s spent in his free time with binoculars and notepad in hand.

“I’ve described my career as a Boy Scout merit badge gone horribly wrong,” joked Dunning. “I still have the notebook from those first bird sightings. It’s from June of 1970.”

Since 1994, when Dunning came to Purdue, those notebooks have included notes from Purdue Horticulture Park and West Lafayette’s Celery Bog, where he has led weekly tours for bird enthusiasts and the local chapter of the National Audubon Society for more than 20 years now. He still looks forward to every walk and the field trips he leads around the state.

“The intrigue of birding is like stamp collecting. It’s seeing something new, getting a new thing to put in an empty space on a page,” Dunning said. “You never know what you’re going to see, and we know that because of the change of the seasons, we may see something new every time we go out.”

For every new thing Dunning sees, and even the more routine things, he takes notes in the same type of notebook he did as a Boy Scout. He has records on bird locations, weather conditions and other observations for all his excursions. Dunning hasn’t counted the notebooks, but he once dumped them on his dining room table, and they covered it.

One major thing he can pull from those decades of notes — Indiana’s climate is changing rapidly, and it’s having a real effect on birds.

One of the annual trips Dunning leads for his graduate students and local bird enthusiasts is up to the Jasper-Pulaski Fish & Wildlife Area each fall to see a gathering of thousands of sandhill cranes. The birders might come with as little as a pen or pencil and a notebook to jot down details from the trip. But others have binoculars, spotting scopes, cameras and lenses, and devices that attach smartphones to the spotting scopes to improve photo-taking capabilities.

These people are a fraction of the 1.2 million birders the U.S Fish & Wildlife Service estimates there are in Indiana. There are 47 million people across the country that count bird watching as a hobby, and they spent $41 billion on it in 2011 from equipment to trips and hotel rooms to see sites like where the sandhill cranes congregate in Indiana.

And once at the wildlife area, it’s clear to see why. It’s a stunning sight.

Birds in pairs or small flocks call to each other as they descend on the fields, their silhouettes a contrast on the pinks, blues, oranges and yellows of the sky as the sun sets. They’re in Indiana to feed on leftover grain in harvested fields, usually a pit stop on the way to Georgia or Florida for the winter.

They leave their northern habitats as marshes start to freeze, staying in Indiana until the same happens here. They’ll slip from the fields to nearby marshes as the sky grows dark, the water a protection from predators that will make splashing noise should they try to attack during the night.

“It’s one of the most spectacular things we can see in this area,” Dunning said.

But the scene has changed in two distinct ways since Dunning started taking the trips to Jasper-Pulaski in the 1990s.

First, there used to be upwards of 25,000 cranes at Jasper-Pulaski at one time. These days, Dunning’s group might see 5,000 or fewer.

“What’s really dramatic is seeing hundreds, to thousands, sometimes ten thousand in one place at one time. We don’t see those concentrations anymore,” Dunning said.

Second, Dunning led this most recent trip in late November, around Thanksgiving. But back in the 1990s, the cranes were in Indiana by late October.

Northern marshes are freezing later and later each fall. The cranes don’t have to leave to find a safe habitat by October. And in some cases, Indiana marshes might not freeze at all, meaning cranes are spreading out to more places and might even stay year-round in years where marshes never freeze here.

A warming climate is playing a central role in the migration habits of sandhill cranes, and there are both costs and benefits associated with that.

Positively, having cranes in less-dense groups decreases the likelihood that a disease or accident, such as an oil tanker overturning and contaminating the habitat, would devastate the birds’ population. With more hospitable habitats available, the birds are a little more protected.

But dispersing the birds makes their gatherings less spectacular. That means fewer people might be interested in traveling to places like Jasper-Pulaski. They’ll spend their money elsewhere or on different hobbies. And if interest in birding declines, so too will interest in protecting birds and their habitats.

“When we think back to the kinds of things that got us birders interested when we were young, it was these kinds of events that just capture people’s imagination and get them started,” Dunning said. “We’re losing the kind of experiences that get people into nature.”

In a more direct way, Dunning sees ways in which birds are dangerously threatened by a warming climate.

The red knot starts its spring migration from South America to the Chesapeake and Delaware bays based on the length of the days. There, it feeds on the eggs of horseshoe crabs laid on the beaches.

Those crabs come to the beach based on the temperature, and as it warms, they lay their eggs earlier. By the time the red knots appear, the eggs have hatched and the food source is gone, leading to dwindling numbers of the birds.

“We think the horseshoe crabs are responding to local weather conditions and coming out earlier and earlier. But the red knots, since they’re in South America, don’t know what the weather conditions are in Delaware Bay, so they’re using different cues to migrate,” Dunning said. 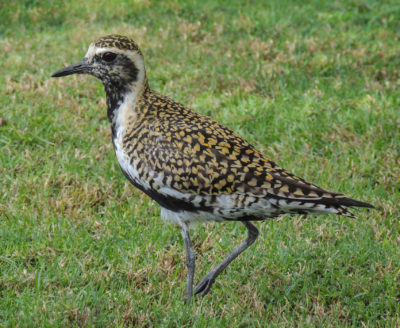 Closer to home, climate may be a factor for the loss of American golden-plovers. The birds have long congregated in the spring in White and Benton county fields. There, they feed on earthworms while molting into their breeding plumage.

In the 1990s, Dunning said there were as many as 30,000, perhaps even 90,000 golden-plovers in the area. Today, informal estimates put the number at around 3,000. In that time, Indiana’s climate has been volatile. Periods of drought and others where rain has been abundant make the conditions inhospitable for the golden-plover and may be the reason so few are seen these days.

“Changes in the right conditions to support the birds on their movement north is one of the possibilities,” Dunning said. “They need something in the middle — between drought or really wet springs. We think one of the advantages of being in these great big agricultural fields is there is a lot of variation and they’ll find the right conditions somewhere. But they don’t seem to be anywhere here in the numbers we used to see.”

The birds could be spreading out or finding new places to congregate. But Dunning hasn’t seen reports of golden plovers in adjacent counties or states. So he’s left wondering what has happened. Recent surveys suggest population declines in a large number of Arctic-breeding shorebirds, which includes the American golden-plover. So the problems may involve more than just this species.

It’s possible that there are birders out there just like Dunning who are thrilled to see a golden plover where it’s never been before. But that thrill comes with some regret for Dunning.

“I still have the same excitement over all these years when something pops up and I haven’t seen it for a long time, or it shows up and it’s never been here before,” Dunning says. “But it’s also depressing to see something that’s really cool, and it’s cool because it’s not supposed to be there. You know it’s probably not really good for the birds.”

It’s a situation that’s playing out all over the country, and it’s happening to many of the 400 or so species of birds in Indiana. Based on data from the U.S. Forest Service that shows how bird migratory patterns are changing, Dunning estimates that 30 percent of bird species are benefiting from climate change. But the rest are worse off.

“If there is one thing I would tell the bird-watching public: ‘yes under climate change there will be winners and losers. But all the evidence we see so far says there will be a lot more losers than winners,”’ he said.

“As far as I can tell, that has never happened prior to the 1990s,” Dunning says.