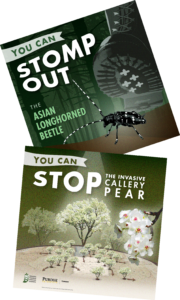 Purdue scientists have long studied “invasive species,” or non-native plants, animals or microbes. Now they’re recruiting Indiana citizens to help protect the state from these species, which often spread aggressively, replace native organisms and pose threats to human health and well-being, the environment and our economy.

Scientists in the Department of Entomology have launched ReportINvasive.com, hosted by the College of Agriculture and the Indiana Invasive Species Council, to help Hoosiers identify and report some of the biggest threats, such as emerald ash borer and Callery pear.

“Public engagement and reporting is key in the fight against invasive species,” says Elizabeth Barnes, exotic forest pest educator in the Department of Entomology. “We’ve had many success stories where a member of the public brought a new invasive species to our attention and we were able to stop it before it spread. Even after species are established, reporting helps us understand how they spread and where we should focus our eradication efforts.”