The Future of the World’s Water

It’s a familiar hypothetical question: If you could know your future, would you want to? 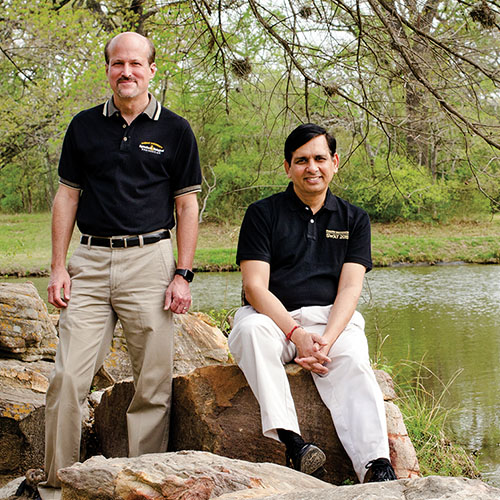 To answer “yes” is a risky proposition. But for the future of our environment, there’s a greater risk in not knowing where we’re headed. Few issues are more central to that future than assessing the quality and abundance of our global water supply—and how they might change. Two alumni of Purdue’s Department of Agricultural and Biological Engineering (ABE) developed a model that provides carefully calibrated forecasts, quantifying the impact of land management practices in large, complex watersheds.

Jeff Arnold and Raghavan Srinivasan developed the Soil and Water Assessment Tool (SWAT), a river basin scale model that is widely used in hydrology and water quality assessment. The input data are vast, and include weather, pond and reservoir storage, crop growth, nutrient and pesticide loading, irrigation, and multiple hydrological processes, including various types of runoff, groundwater flow, and evapotranspiration.

Arnold and Srinivasan met at Purdue in 1989 as two of the first graduate students of Bernard Engel, who is now a professor and department head of ABE. Arnold had worked on previous modeling efforts at the U.S. Department of Agriculture Agricultural Research Station (USDA ARS) in Temple, Texas. Previous watershed models were put together by hand, with overlapping layers such as topographic and soils maps, and simply weren’t useful.

But Engel was at the forefront of the newest technology, says Arnold, just as the use of geographic information systems (GIS) was increasing. GIS maps allowed an unlimited number of data layers to be associated with a particular region and provided statistical analysis tools as well.

“Bernie gave us the freedom to think broadly and do whatever we wanted to do. That really helped us, and he led by example,” says Srinivasan, who had done some GIS programming. He and Arnold teamed up to work on the model and returned to Texas after finishing their doctoral degrees in 1992. For nearly a quarter of a century, they’ve continued to improve it.

“It’s fun to think back about our days at Purdue.” —Jeff Arnold

Srinivasan is a professor in the Departments of Ecosystem Sciences and Management and Biological and Agricultural Engineering at Texas A&M. Arnold is an agricultural engineer at the USDA ARS in Temple. They gained early funding to continue developing SWAT with projects for the USDA and the Environmental Protection Agency, where SWAT is instrumental in setting conservation and environmental policy.

They soon decided to share it globally, providing a web interface and access to the source code for other developers. Srinivasan also gathered and compiled existing input data sets on the web, so that users can begin running customized scenarios quickly—within a couple of weeks instead of years. As a result, global use of SWAT grew rapidly, with users in North America, South America, Europe, Africa, China, and Southeast Asia—all locations where Srinivasan regularly conducts training courses. More than 2850 peer-reviewed articles about the model have been published.

Arnold and Srinivasan’s key goal is simple: to help people make the best land-management decisions possible based on the specific environmental conditions of a selected watershed. Now, with a bit of training and technical skill, users can set up and execute a SWAT simulation for past historical periods or current conditions. They can also run future scenarios—studying water quantity and quality implications under climate change, land-use change, or different land-management scenarios.

For example, says Arnold, “Western Lake Erie is like green soup; the algae is so thick that you can just about float on it. It’s ruining the fishing and water quality. We’re going to have to figure out how to remedy those conditions.”

And in the lower Mekong Delta, the SWAT model is used to negotiate policy on water availability and use among Laos, Thailand, Cambodia, and Vietnam. “Water doesn’t know the political boundaries,” says Srinivasan, “so the model is really giving you transparent information in terms of the process and the outputs of how much water is available, who is using that water, and things of that nature.” Newer model developments include simulations of bacterial populations and emerging contaminants, such as pharmaceuticals and hormones. The team is also incorporating climate change model outputs into SWAT to help predict the effects of climate change and the adaptations required for watershed resilience under different scenarios.

Both are Distinguished Alumni of the College and continue to collaborate with Purdue colleagues. “It’s fun to think back about our days at Purdue,” says Arnold, who remembers wondering if Engel ever left the lab to sleep. He admits that here his predictive powers failed. “I thought once Bernie had tenure he might slow down a bit, but I guess with his personality, he really hasn’t slowed down at all.”

The mission of land-grant universities like Purdue and Texas A&M is reflected in their work, says Srinivasan. Discovery, learning, and engagement all play a role in their work with SWAT, including model development, user training, and wider dissemination of the tool. “So it is truly a multidisciplinary, multi-institutional, and multiscience tool that we are using,” says Srinivasan, “to try to understand the complex nature of the world.”