Ryan Howard, agricultural and biological engineering (ABE) alumnus, was ahead of the curve when he founded Chicago Vegan Foods in 2003.

While the natural food crazes had hit the coasts by this point, Howard said those trends hadn’t yet gained traction in the Midwest.

“Driving around Indiana it’s soybeans and corn for as far as the eye can see,” Howard said. “So much of the natural food products are centered around soy, so I just didn’t understand why there weren’t more vegan food companies in the region.”

Howard began eating vegan in high school after learning about the ways livestock agriculture affects the environment and human health. This passion, combined with his interest in math and science, led him to study food process engineering in ABE.

“My grandfather said if you study engineering you can do anything you want. Engineers are innovators, and innovators understand how to read the future,” Howard added. “And I think he was right. That course of study is what prepared me for my own entrepreneurial undertakings.” 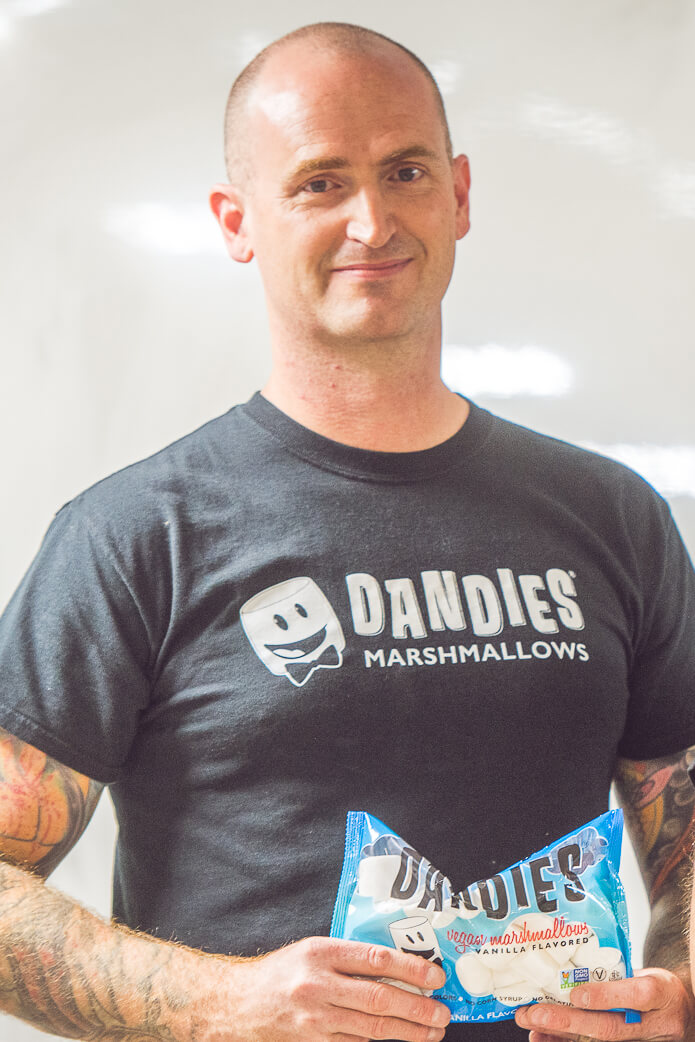 From the Soy Innovation Competition at Purdue to extracurriculars and research opportunities, Purdue offered Howard an ideal environment for science-minded entrepreneurs.

“Purdue really is kind of an incubator for those looking to innovate. There are so many opportunities in every direction even beyond the formal education component. Researching, networking, experimenting, even failing, it’s all essential to a prospective business person.”

As with all business endeavors, Howard said, he had some stumbles and misses when he began product development and testing. He wanted to find a vegan food product that was soy-based, not too technical to produce and niche enough that he wouldn’t be competing with the few already established vegan brands.

After getting outpaced by larger companies in his soy milk and ice cream attempts, Howard realized he needed to go even more niche, which is when he arrived at marshmallows.

“Most people might not think there’s a need for vegan marshmallows, but at the time nearly all marshmallows on the market contained gelatin,” Howard explained. “Gelatin, of course, is derived from animal proteins, usually cows or pigs.”

As soon as Dandies, the company’s vegan marshmallow product, landed on the market demand soared. Howard worked with many restaurants in Chicago beginning to break into the vegan food scene and he supplied to these establishments. This afforded him insight into other needs these restaurants had, which is why, eventually, Chicago Vegan Foods also began producing vegan cheese and vegan soft serve ice cream.

Howard said he is especially proud of the soft serve product, which comes in powdered form and can be mixed on location at restaurants. Most of the demand is still for marshmallows, however, which Howard said comprises 95 percent of the business. He also has a soft spot for them, enjoying them on their own or dipped in melted chocolate.

So, what product is next in line for development for Howard?

He said he’s not sure yet. The only thing he knows is there will always be something cooking in the hopper.

“I have always lived by that innovate or die mentality. Things change. That’s the only thing that’s constant.”

Learn about innovative farm management strategies, new technologies for improving efficiency and productivity, ways to help ensure a successful transition of your operation to the next generation and more at the annual Purdue Farm Management Tour, July…

Black and Hispanic consumers are somewhat more likely to check food labels and much more likely to face food insecurity, according to the Consumer Food Insights Report.