Every drop of energy humans consume originates from sunlight. The plants we eat capture the sun’s energy through photosynthesis, and the animals we eat are fed by plants.

But the thing that makes all that life possible is the same thing that can break plants’ ability to photosynthesize. Too much light can wreak havoc on a plant’s photosystem II, a molecular nanomachine that extracts electrons from water in photosynthesis. The damage to photosystem II affects photosynthetic efficiency and makes plants expend energy to repair the damage. Purdue’s Sujith Puthiyaveetil, an assistant professor of biochemistry, is interested in determining how plants repair their photosystems, and he recently received a $500,000 grant from the U.S. Department of Energy to find out.

“The water-splitting activity of photosystem II is a remarkable chemical feat. With it, however, comes an inherent risk for photodamage,” said Puthiyaveetil, who is a member of the Purdue Center for Plant Biology.

The light-induced damage to photosystem II occurs even in low light, but high-intensity light exacerbates it. An hour of bright sunlight on a summer day can breakdown all of photosystem II in a square meter leaf area in a plant. 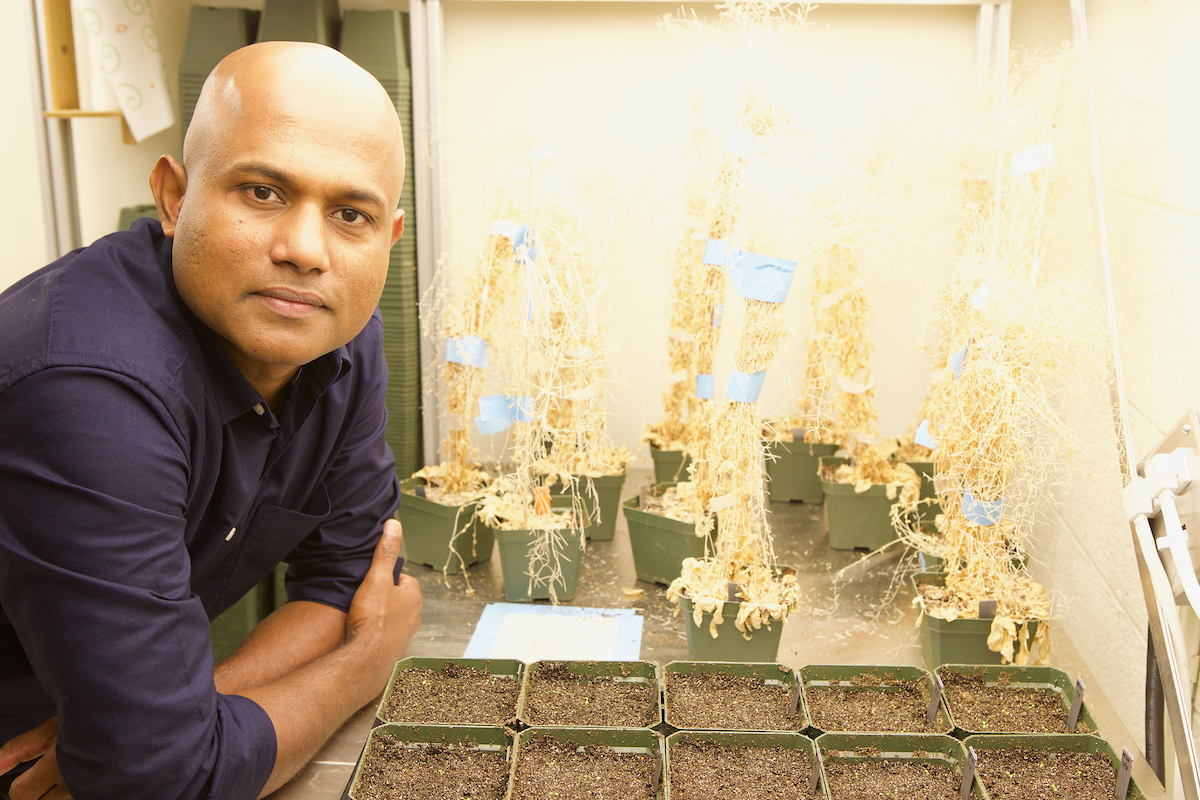 Understanding how the plant photosystem II is damaged and how it repairs itself could lead to plants designed to withstand more light or more easily fix their photosystems, freeing up energy and resources for plant growth and reproduction.

“Light-induced photosystem damage is the plant equivalent of sunburn,” Puthiyaveetil said. “The photosystem becomes defective. It repairs itself through a robust and ingenious mechanism, but we don’t fully understand the intricacies of it.”

Scientists know that in light, photosystem II undergoes phosphorylation in several places. The addition of these phosphate groups to photosystem II proteins likely aids in the disassembly of damaged photosystems and their eventual repair.

“Photosystem II is a huge pigment-protein complex and if a plant had to replace the entire 30 or so of its protein subunits, it would be very costly,” Puthiyaveetil added. “Instead, it seems to replace the only one or two subunits that are damaged.”

He likened it to having a vehicle break down. Rather than buying an expensive new car, the owner might be able to replace one or two damaged parts and get back on the road.

The assignment for Purdue Natural Resources and Environmental Sciences professor Laura Bowling’s last field trip of the semester, was to collect and count invertebrates in a section of Burnett’s Creek, just north of campus. Note the reaction of students (left to right) Avery Fess, Ireland Beebe and Eva Curtis when the inch-long cranefly larvae show a little more mobility than expected.

Founded in 2018, the Unsung Diversity Hero Award is presented annually to a faculty member, staff member and student for their efforts to create an inclusive environment within their department and the college as a whole, going out of their way to lead others by setting a positive example.