rofessor of Agronomy Eileen Kladivko moves easily between the classroom, lab, field and farm. (She likes them all but favors the outdoors, interacting with farmers.) For her accomplishments across discovery, learning and engagement, Kladivko has received the 2022 Corinne Alexander Spirit of the Land-Grant Mission Award. 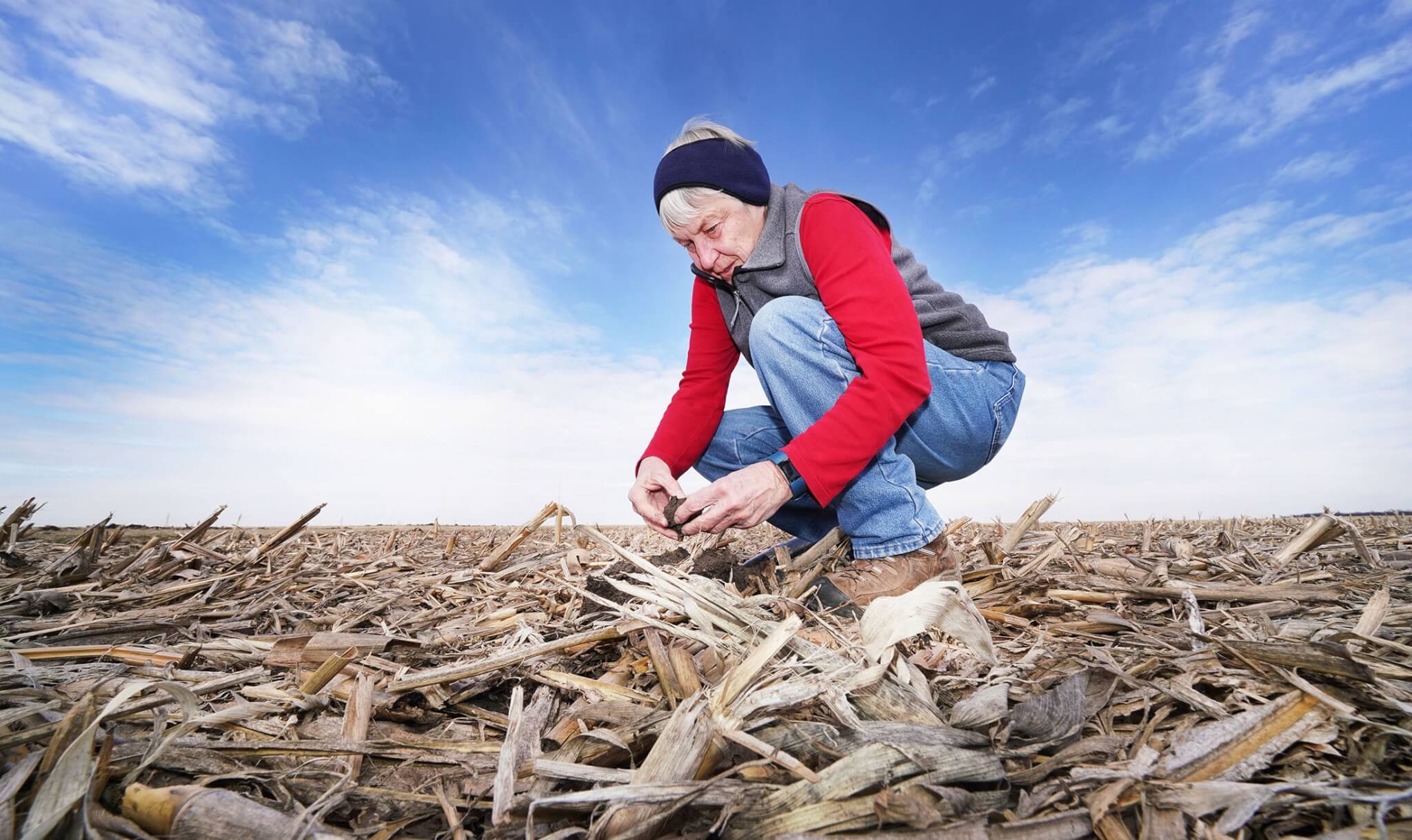 Eileen Kladivko taking a soil sample at the Purdue Agronomy Center for Research and Education (ACRE). Photo by Tom Campbell.

The annual award recognizes a faculty member in the colleges of Agriculture, Health and Human Sciences, and Veterinary Medicine whose work exemplifies the three pillars of the land-grant mission. Established in 2008, its name honors the late Corinne Alexander, professor of agricultural economics and Extension economist.

“Dr. Kladivko has helped to lead two significant changes in agriculture: the use of cover crops as a technique to reduce farm field nutrient losses and soil erosion; and the use of soil health to improve the understanding of soil systems management,” says Ron Turco, professor and department head of agronomy.

“I was always interested in the intersection of agriculture and the environment,” Kladivko says. Her research has focused specifically on tile drainage and water quality; the interactions of earthworms, soil management and soil physical properties; conservation tillage and cover crops for soil health improvement; and preferential flow of chemicals through soils.

Kladivko joined the agronomy faculty in 1982 as an applied soil physicist. “I was very well aware that I was the first woman faculty member in the agronomy department,” she recalls. “Everyone was very welcoming, supportive and helpful. I maybe was going to work harder to prove myself, but I felt like they wanted me to succeed.”

Professors Jerry Mannering and Don Griffith immediately invited Kladivko to make soil physical property measurements on plots in two studies of the effectiveness of different tillage systems in growing crops. “I would call myself almost an apprentice for that first season,” she says of their mentoring.

As a new professor, Kladivko also joined a team conducting a water drainage project that she would remain involved in to varying degrees over 35 years. The researchers continued to collect water samples and data even as Kladivko initiated new field projects that required her detailed attention. But she used a 2003 sabbatical in Iowa to revisit these data, immersing herself in a thorough analysis that laid the groundwork for a series of Extension publications detailing tile drainage as an essential agricultural water management practice on poorly drained soil.

While her early work met departmental needs and expanded her own knowledge, Kladivko also sought out a new area of research. “I’d seen some work in Europe and Australia about how earthworms are part of the story for no-till and improving porosity and water flow in the soil,” she explains. “Only one or two people in the U.S. were looking at earthworms in no-till at that time. Within a couple of years, I was getting invited to give talks all over the Midwest.”

During her Iowa study, Kladivko also noted how the use of cover crops reduced nitrate levels. Farmers knew cover crops were good for water quality, but now the practice’s impact on soil health was gaining momentum.

She has observed — and hopes she has contributed to — growers’ changing attitudes toward conservation tillage and cover crops. “There’s been an evolution, I would say, in understanding that we need to pay attention to soil biology, cover crops being one aspect of that,” says Kladivko, who has worked on cover crops at three different times in her career.

She was a founding member of the Midwest Cover Crops Council​ in 2006 and remains on its executive committee. Ask Kladivko why her enthusiasm for the regional organization has never waned, and she immediately holds up the third edition of its popular Field Guide.

“I feel like we’re having an impact,” she says. “None of our states have the resources to do all the work they need to do on cover crops by themselves. By working together, we can do a better job in both research and extension.”

Kladivko’s work, independently and in collaboration with the USDA’s Natural Resources Conservation Service and Indiana Conservation Partnership, has helped conservation grow in Indiana, as more farmers reevaluate their management practices for potential impacts on soil health, system resiliency and water quality. Indiana now has one of the largest land areas using cover crops in the country, with over a million acres.

Providing pragmatic solutions for growers is a hallmark of Kladivko’s research and critical to her efforts to create an informed community to improve agriculture's long-term sustainability. “Research and extension go hand in hand,” she says. “Some research ideas are mine or from scientific colleagues. Then I talk with farmers, and their questions generate more ideas that I try to design experiments to answer.

“That’s much different than what I thought as a young person just learning about extension — it’s truly much more of a back and forth than I realized when I was first starting out.”

Her research also makes its way into her classes on soil physics. “I’ve joked with my students that it’s probably the only soil physics class in the country where they have a whole lecture on cover crops and most of a lecture on earthworms,” she says. “That’s not typical. And we delve in the whole soil health area where I’m doing a lot of research now.’”

Kladivko believes the best way to understand soils is to work with them hands-on. “My lab is not a demonstration of theory; it’s teaching real methods that they as practitioners may very well use.”

Three assets characterize her career at Purdue, she says: Good colleagues, a positive work environment and “the freedom to do pretty much what I want, within reason.” In that context, she has influenced thinking on the impact of land practices such as tillage and cover crops on productivity, and promoted soil health to maintain soil productivity for now and future generations.

A prestigious award, she adds, validates her intent to balance the three missions of the land-grant institution. “I’m not a superstar in any one of those missions,” she says,” but this is an affirmation that people appreciate what I’ve done.”

One person can’t measure all the trees in the world, but when many people come together, a global view becomes possible. A worldwide collaboration of scientists has produced the first ground-sourced data estimate of the total number of tree species on Earth and found that more than 9,000 species have yet to be discovered.

With over 30 years spent at Purdue University, Thomas Hertel, distinguished professor of agricultural economics, has many professional milestones that timestamp his career. The most recent one is the announcement that he has received the Humboldt Research Award by the Alexander von Humboldt Foundation in honor of his career dedicated to researching the global impacts of trade, climate and environmental policies. The award will enable Hertel to spend six months conducting research in Potsdam, Germany.