hat cherry flavor you enjoy in candy and soda is likely a combination of aromatic and flavor compounds discovered through study of plants in laboratories far from cherry trees. It and the sweet scent of your almond extract may actually be courtesy of a petunia flower. 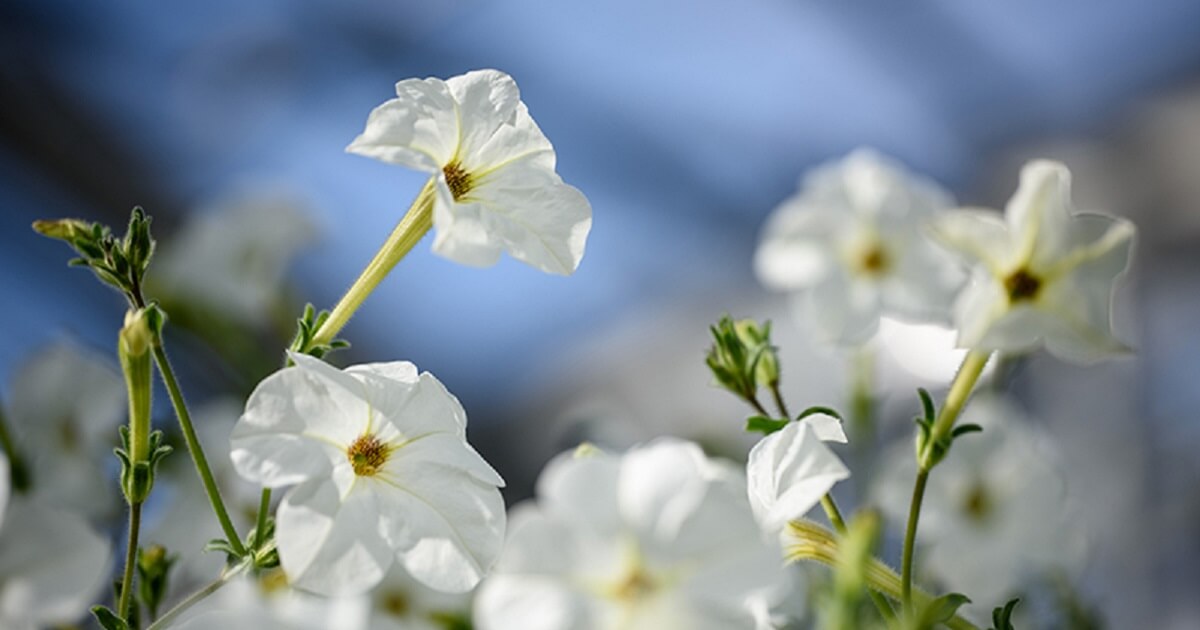 Natalia Dudareva, distinguished professor of biochemistry in Purdue’s College of Agriculture, and post-doctoral researcher Xing-Qi Huang used petunias to discover the molecular recipe the valuable flavor compound benzaldehyde. The compound is found in the aroma of many fruits, as well as the petunia. (Purdue University photo/Xing-Qi Huang)

Some flavors and aromas are more elusive than others, and a team of Purdue University researchers recently found the molecular recipe for one of the most coveted compounds by the flavor industry: benzaldehyde. It may not sound tasty, but it is key to some of the most popular flavors including cherry, almond and raspberry. It is second only to vanillin in terms of economic value to the food industry. 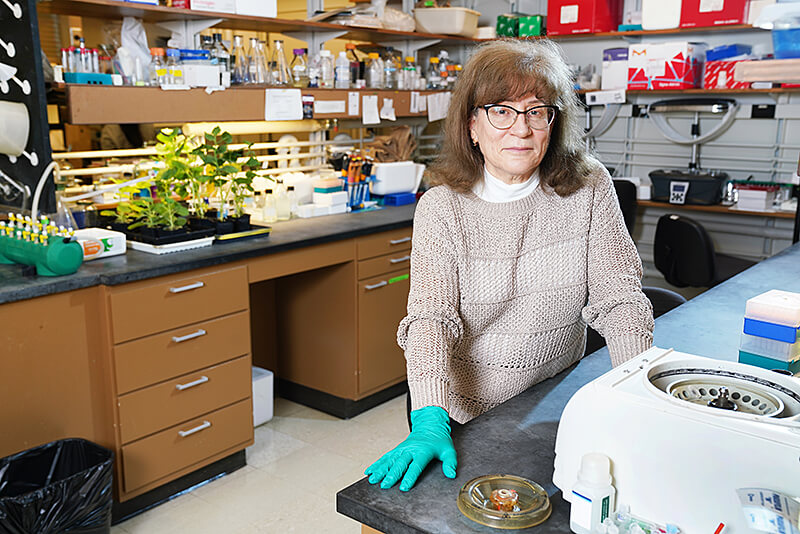 Natalia Dudareva, distinguished professor of biochemistry in Purdue’s College of Agriculture, stands in her laboratory. Dudareva led a team of researchers that mapped the biosynthetic pathway of an anti-cancer compound found in oregano and thyme, opening the door to potential pharmaceutical use. (Purdue University photo/Tom Campbell)

“Benzaldehyde is what gives that pleasant almond-like scent and is part of the aroma of many fruits,” said Natalia Dudareva, a distinguished professor of biochemistry in Purdue’s College of Agriculture who led the team. “That scent attracts pollinators and, in addition to those fruits, it is found in other plants, including petunias.”

Biochemists track down the molecular recipes, called biosynthetic pathways, that make these compounds and allow them to be bottled into different flavors for the products we enjoy. When steps in the molecular recipe are missing, chemicals outside of the natural processes are used in commercial production, she explained.

“When chemical reactions are added in to fill the gaps, it can be a problem,” said Dudareva, who also is director of Purdue’s Center for Plant Biology. “It is much better and safer to use an entirely natural pathway to a flavor compound, but it is difficult to discover all of the steps. Benzaldehyde has an especially puzzling biosynthetic pathway, and it wasn’t completely revealed until now.”

Dudareva and her team studied the scent of petunia flowers to discover the molecular recipe for benzaldehyde. The work is detailed in a paper in Nature Communications, and a patent on the process is pending.

“The goal is to have the natural process found in plants, and this discovery makes that possible for a very important flavor compound,” said Dudareva. “The alternative to synthesis is truly extracting a compound from plants, but only 1.5 percent of the benzaldehyde in worldwide production is obtained this way.”

The biosynthetic pathway will likely be genetically transferred to yeast or other microbes to incorporate it into the fermentation process widely used in food and beverage production, she said. 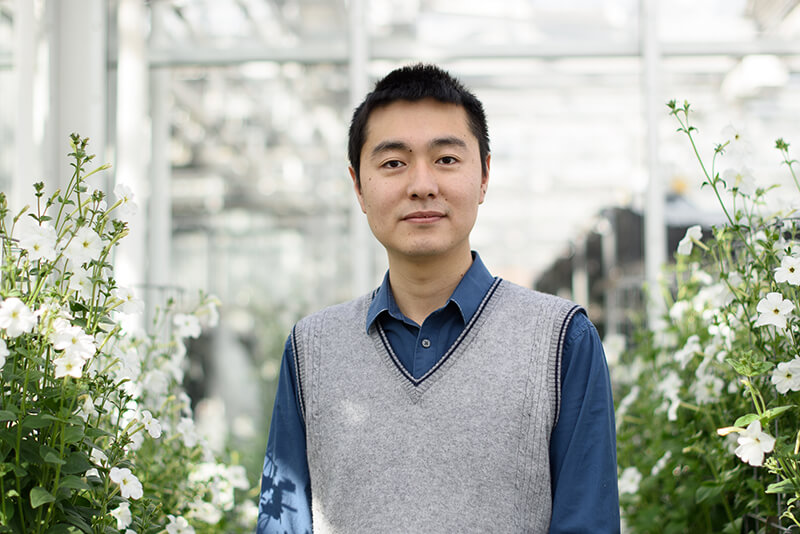 Xing-Qi Huang, post-doctoral research in Purdue’s Department of Biochemistry in the College of Agriculture. Huang stands among petunia flowers he used in his work on the biosynthetic pathways of flavor and aroma compounds. (Purdue University photo/Ya Wei)

The team found that synthesis of benzaldehyde in petunia petals involves an enzyme consisting of two subunits that must combine in equal amounts to activate, said Xing-Qi Huang, an author of the paper and post-doctoral researcher in Dudareva’s lab.

“The gene directly responsible and enzyme needed for benzaldehyde synthesis were a mystery,” he said. “We tried newer techniques, but it took a classical approach to reveal it.”

This was because of the enzyme’s uncommon need for two subunits to function, or heterodimeric structure, he said.

Because of this, earlier analysis methods looking for a single component appeared to fail.

“We estimate the size of the protein we are hunting in addition to other things we have learned about the pathway,” he said. “We weren’t finding a good indication of a single protein within that estimate. However, we noticed the presence of two components of half the size of our estimate, and we thought maybe there are two subunits.”

Further proteomic and genetic testing confirmed their idea and revealed the genes involved. Their work found the protein subunits have an interesting structure, as well. They form what is called the Rossmann fold, named after the late Purdue professor and renowned structural biologist Michael Rossmann.

“Purdue is all over the petunia,” Dudareva said. “This discovery is the most recent. We now have mapped out almost all of the genes and pathways responsible for petunia scent compounds. To also see within it proteins that embody a structure discovered by and named after a fellow faculty member adds a special connection. It is beautiful.”

In addition to Dudareva and Huang, Renqiuguo Li and Jianxin Fu participated in the research and are co-authors of the paper.

The National Science Foundation (IOS-1655438) and the USDA National Institute of Food and Agriculture (Hatch Project number 17784) funded this research.

A peroxisomal heterodimeric enzyme is involved in benzaldehyde synthesis in plants

Benzaldehyde, the simplest aromatic aldehyde, is one of the most wide-spread volatiles that serves as a pollinator attractant, flavor, and antifungal compound. However, the enzyme responsible for its formation in plants remains unknown. Using a combination of in vivo stable isotope labelling, classical biochemical, proteomics and genetic approaches, we show that in petunia benzaldehyde is synthesized via the β-oxidative pathway in peroxisomes by a heterodimeric enzyme consisting of α and β subunits, which belong to the NAD(P)-binding Rossmann-fold superfamily. Both subunits are alone catalytically inactive but, when mixed in equal amounts, form an active enzyme, which exhibits strict substrate specificity towards benzoyl-CoA and uses NADPH as a cofactor. Alpha subunits can form functional heterodimers with phylogenetically distant β subunits, but not all β subunits partner with α subunits, at least in Arabidopsis. Analysis of spatial, developmental and rhythmic expression of genes encoding α and β subunits revealed that expression of the gene for the α subunit likely plays a key role in regulating benzaldehyde biosynthesis.

One person can’t measure all the trees in the world, but when many people come together, a global view becomes possible. A worldwide collaboration of scientists has produced the first ground-sourced data estimate of the total number of tree species on Earth and found that more than 9,000 species have yet to be discovered.

With over 30 years spent at Purdue University, Thomas Hertel, distinguished professor of agricultural economics, has many professional milestones that timestamp his career. The most recent one is the announcement that he has received the Humboldt Research Award by the Alexander von Humboldt Foundation in honor of his career dedicated to researching the global impacts of trade, climate and environmental policies. The award will enable Hertel to spend six months conducting research in Potsdam, Germany.