Q: We have been battling squash bugs for years. This year we went to preventive measures. Well, they are back. I now need to know what can we do to apply to kill them on contact. We are totally organic here. – T.H., Bremen, Indiana 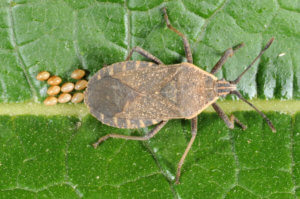 A: Squash bugs can be a persistent pest on all of the cucurbits, but especially on squash and pumpkins. This pest overwinters as adults in crop residue or nearby weeds, then fly to fields and gardens when the vines begin to “run.” After mating, they lay their eggs on the cucurbit leaves. Both the wingless nymphs and adults suck plant sap from leaves, vines, and fruit, presenting a challenge through most of the growing season. Their saliva contains plant toxins, resulting in black and crispy leaves near feeding sites. The plant wilts and may eventually die. In the late season, squash bugs may feed on the fruit, causing the fruit to collapse.

Sanitation to remove overwintering adults and control of the young nymphs are key to staying ahead of the problem. Scout the plants beginning early in the growing season and hand remove egg clusters as soon as you see them (see photo 1). A pyrethroid containing insecticide can provide some control of young nymphs. For organic growers, pyrethrum, neem, or a product that contains both can offer good control, but applications need to target young nymphs. Organic insecticides are not effective at controlling adults. Removal of crop debris and weeds at the end of the season will reduce next year’s population. 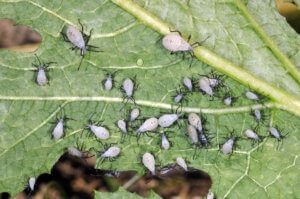 Additional information on this and other insect pests can be found in the Purdue Extension Publications. Managing Insects in the Home Vegetable Garden and Cucurbit Insect Management .

Q: I have three utility posts in my front yard and want to hide/disguise them with perennials grown from seeds. I have considered daisies and black-eyed Susans. Any other suggestions? – LR, Whitestown, Indiana

A: Although starting from plants is generally easier and faster, some perennials can be successfully grown from seed. Examples of other perennials that can be started from seed include agastache, allium, anemone, baptisia, columbine, purple coneflower, obedient plant, and turtlehead. Many perennials are hybrids, and their seeds usually produce a wide range of unpredictable colors and growth habits if seed is harvested from garden plants. For best results, buy seed from reliable seed vendors.

Note that many plants that are easily grown from seed are also prolific self-seeders and may spread beyond where you want them in the garden. See our Purdue Extension publication Spreading Ornamental Plants; Virtues and Vices for more information.