Q. I am wondering what you might know about the small “red cedar trees” that seem to be invading fencerows and highways, especially U.S. 31 north of Kokomo. I think a column from you would be worthwhile, since I can’t seem to get my neighbors to control the “pretty little trees,” which are much like Canadian thistle and kudzu. — E.W., Kokomo 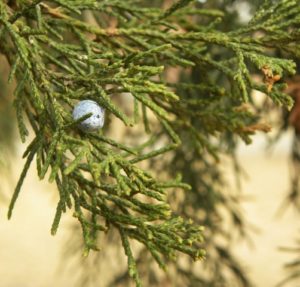 A. The eastern red cedar is a juniper, rather than a true cedar. Known botanically as Juniperus virginiana, it is actually native to the eastern two-thirds of the United States and Canada. But as you’ve observed, it wears out its welcome by volunteering along fencerows, roads and pastures.

The eastern red cedar is also the alternate host for cedar apple rust, a fungal disease. On the plus side, it is a very adaptable species and can survive really tough conditions. It also provides food and shelter to a wide range of wildlife, which is how it has become so widespread — wildlife eat the fruit and distribute the seed. Despite its native status and value to wildlife, it is considered to be weedy and invasive in many situations.

For a really interesting article about the history of this species, visit http://piedmontmastergardeners.org/article/the-pros-and-cons-of-the-eastern-redcedar/

Cutting or mowing down to the ground so that no green foliage remains can be a very effective control. Of course, this is much easier to do when the seedlings are young.

Q. I sent in a mystery plant question that was featured in your column in the July 2017 issue. The plant was not doing well then but has finally begun flourishing. I have identified it to be a Portulaca molokiniensis. I have found various sites that all give different descriptions on how to care for it. Do you know the best way to care for this plant species? — R.E., Columbus 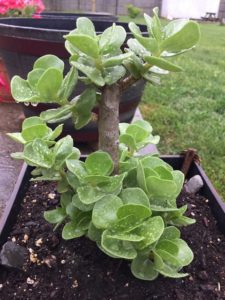 Hawaiian portulaca is a tropical succulent not hardy in Indiana.

A. Hawaiian portulaca is a small succulent shrub where it is native, but it is not hardy enough for Indiana winters. In fact, it can’t tolerate much below freezing. So if you move it outside in the summer, you’ll need to bring it indoors before autumn frost.

As an indoor plant, it will thrive best in a sunny window in well-drained succulent potting mix and watered sparingly.

Q. We have a bumper crop of maple tree sprouts in our landscaping. How can we prevent the sprouts next year? Besides pulling them, is there any way to deal with them this year? — R.A.K.

A. Unfortunately, not much can be done in the home landscape to prevent them. However, if you get after the sprouts while they are young, you can keep them under control.

Although tedious, hand digging, repeated cutting, or targeted application of a translocating herbicide, such as glyphosate, can be used. If you use the glyphosate, apply to actively growing seedlings and make sure you do not get any of the herbicide on your desirable plants.  Always read and follow label directions when using pesticide.