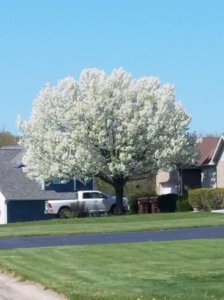 Q: I’ve attached pictures of the only tree we have on our property. Because it is our only tree, I am deeply concerned with the possibilities of irreparable damage to it. As you can see, one of the branches broke off during a November windstorm. Unfortunately, that left a bare gap on the trunk. Please let me know how to treat this damaged area so no further damage is done to it and tell me what can be done to preserve its longevity.

I do not know the name of this tree but it’s local. It is found almost everywhere in this area. It blooms white flowers in the spring that fall off shortly after and changes to beautiful colors in the fall. As you can see, it is a beautiful tree. Please help and thank you so much. – L. G., Valparaiso, Indiana

A: To answer the second part of your question first, your tree is one of the ornamental Callery pears, possibly ‘Bradford’ or related cultivar. These ornamental pears were quite commonly planted in the urban landscape for many years, but they are not native to our area. In fact, they have become a serious invasive species. (More on this a bit later.)

A big shortcoming of ‘Bradford’ is that it has numerous crowded and narrow branch angles that weaken the architecture of the tree. This characteristic is well illustrated in your photos.  Branches are likely to break in storms, and trees become structurally unsound. 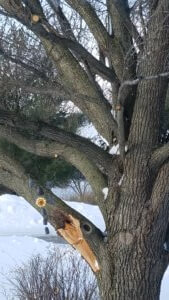 I recommend that you remove the lower affected limb completely, cutting just beyond the ridge of bark where it joins the trunk. Though this will leave a large pruning wound, it will be better than the current jagged wound. We do not recommend pruning paint or other pruning sealants. Additional thinning/removal of excessive branches — including the watersprouts (vigorous, upright twigs) — might help reduce further limb breakage. These watersprouts grow large over time, so removing while they are small will reduce the weight load on branches.

Additional information on how to prune is available at http://www.extension.purdue.edu/extmedia/HO/HO-4-W.pdf.

Now, back to the issue of the invasive nature of ornamental pears. Years ago, in trying to fix the problem of poor structure in the ‘Bradford’ cultivar, the quest was on to introduce improved cultivars with better branch architecture. Enter additional ornamental pear cultivars such as ‘Aristocrat’, ‘Chanticleer’, ‘Cleveland Select’, ‘Redspire’, and ‘Whitehouse’.

These ornamental pears did not fruit much if at all on their own, but unfortunately, they do become fruitful when they cross-pollinate. The result is that “volunteer” pear trees are seeding themselves in alarming numbers in many areas where the pear trees have not been planted, helped along by birds. While the ornamental cultivars typically set very small fruit when they are fruitful, there is considerable variability in fruit size amongst the seedling offspring. And these seedling pears are quite precocious, flowering and fruiting at a very young age, adding to their invasive nature. 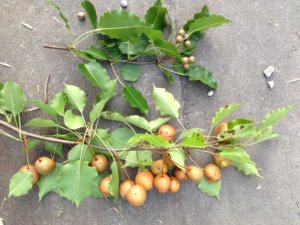 Ornamental pears have been targeted for legislation to eventually ban their sale and distribution.   Most nurseries have already discontinued selling this species, and it is expected to be banned in the next few years. Invasive species legislation, signed by the governor, was published in March 2019 and includes several species commonly found in the landscape, including wintercreeper and Japanese barberry. Other invasive plants will be added in the future.

April 7-13, 2019, has been proclaimed Invasive Species Awareness Week in Indiana. More information about invasive species is available at https://www.in.gov/dnr/naturepreserve/4736.htm

When it becomes time to replace your tree, there are better choices for the landscape.

Alternatives Landscape Plant Options to Callery Pear and other invasive ornamentals can be found at https://www.extension.purdue.edu/extmedia/ID/ID-464-W.pdf