Pent-Up Demand, Then and Now

Suppose you’ve been prevented from buying things for a year, or maybe a decade. Now the dishwasher is on the fritz, the tires are nearly bald, and the springs on the couch have sprung.  Or, you’ve not been to a restaurant or concert or ballgame—or anywhere—for all that time.

Then the constraints are lifted. You emerge from the house, ravenous to buy goods and services that you’ve missed for so long.

Pent-up demand often happens after a recession. People are unemployed, or scared for their jobs, and cut back on their spending. When jobs return and fear subsides, people shop and never drop.

But sometimes pent-up demand is more extreme. Like in 1946. And now. 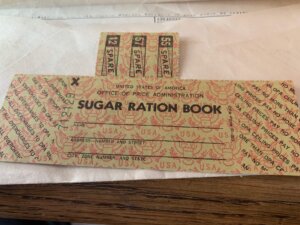 During the 1930s, the Great Depression raised unemployment, cut incomes—and created fear—so people couldn’t spend. Then came World War II. Government increased its spending to build an army, paying soldiers and buying equipment. By 1944 the federal government’s spending was 42 percent of gross domestic product. Taxes rose, but not nearly enough to pay for that much spending, so the budget deficit hit 28 percent of GDP.

That created jobs. The unemployment rate dropped to its lowest level ever, 1.2 percent in 1944.  People on the “home front” were earning a lot of money, many for the first time in more than a decade. They wanted to buy things.

The government had other ideas. Most of the factories were producing war material. Production of consumer goods was cut way back. Big home front spending on the few remaining consumer goods would have caused a lot of inflation. It had happened during World War I.

So the government urged people not to spend. Save your money, buy War Bonds instead! Dr. Seuss drew a cartoon showing deer with dollar-sign antlers. Save 10 percent of your bucks, the caption read, “if you hope to defeat both the Axis and inflation!”

There weren’t enough consumer goods to go around, so the government set up rationing.  Everyone got a ration book full of stamps. You needed cash and stamps to buy rationed goods.  No one got all they wanted, but everyone got some.

People had money, but there was little to buy. Patriots bought war bonds instead of consumer goods. Rationing made it illegal to buy all you wanted. So people saved. Households saved 28 percent of their incomes in 1944, the highest percentage during the past 90 years.

In 2020 the COVID pandemic caused a recession. Unemployment surged to the highest rate since the Great Depression. Many consumers couldn’t spend. “Social consumption” was dangerous, so governments urged social distancing. Most people complied and cut back on service purchases and on travel. Governments shut down much consumer production, then restricted its capacity. Restaurants, theaters and arenas operated with strict limits. Some goods were rationed, by retailers instead of governments. A sign in my local Target said “We will be limiting the quantities of toilet paper, flushable wipes and facial tissue to 1 each per guest.”

The federal government increased its spending, and the budget deficit rose to 15 percent of GDP.  Americans received added income in benefit payments and unemployment insurance benefits. Spending that money was too risky, or not allowed. So people saved. The savings rate hit 16 percent of income, the highest rate since 1945.

Now it’s 2021. Or is it 1946? As people are vaccinated, restrictions are lifted and the pandemic subsides, consumers will want to spend, and they’ll have the savings to do it. Pent-up demand returns!

We’re expecting a boom in consumer spending in 2021. That should help unemployment drop below 5 percent by the end of the year. And inflation? How fast can business ramp up production?