Supporting students from Zamorano to Purdue and home again

taff in IPIA and Food Sciences worked behind the scenes this spring to ensure 11 international interns’ well being and repatriation.

Ada Camila Montoya Gomez, a senior in environmental engineering at Zamorano University in Honduras, was deep into three research projects at Purdue this spring when safety concerns around the coronavirus closed the university.

Montoya was working under the guidance of Douglass Jacobs, Fred M. van Eck Professor of Forest Biology in forestry and natural resources, and FNR graduate research assistant Madeline Montague. Their research involved a study of productivity-diversity relationships in hardwood plantations at Martell Forest as well as projects in southern Indiana and on Saint Simons Island, Ga.

Montoya was scheduled to stay at Purdue and complete her research — from which she would write an applied thesis that her school requires for graduation— until the last week of April. Instead, she and 10 other Zamorano students found themselves looking to their hosts for help salvaging their internships and getting home.

In the International Programs in Agriculture (IPIA) office and food science department, faculty and staff rallied behind the visiting students, who are from countries throughout Central America and South America. Five interns came to Purdue through IPIA and six through Food Science. The students share an orientation and some group activities in their (normally) four months on campus.

“It’s like a three-month interview for graduate school and a great pair of extra hands, especially for junior faculty,” says Professor of Food Science Suzanne Nielsen, who established the program in 2007. She and her husband Robert Nielsen, professor of agronomy, have avidly supported it since, even maintaining a closet of winter clothes for the interns.

Montoya arrived at Purdue on January 11, “thrilled and amazed” by her first look at her new home for the semester. “The first two weeks were an adventure because I needed to know the routes for the bus, adapt to the climate, and get to know my lab team,” she says. “Fortunately, I adapted so well and fast that by the third week of January I was totally fine.”

Administrators from Zamorano visited West Lafayette at the beginning of March to check on their interns and touch base with former interns who are now graduate students or faculty members at Purdue, Suzanne Nielsen notes. “They come to Purdue every three years. They have students going to internships all over the country, and one of the largest groups comes here. At that time, COVID wasn’t a conversation at all. Within a week after they were here, the first questions started to arise.” 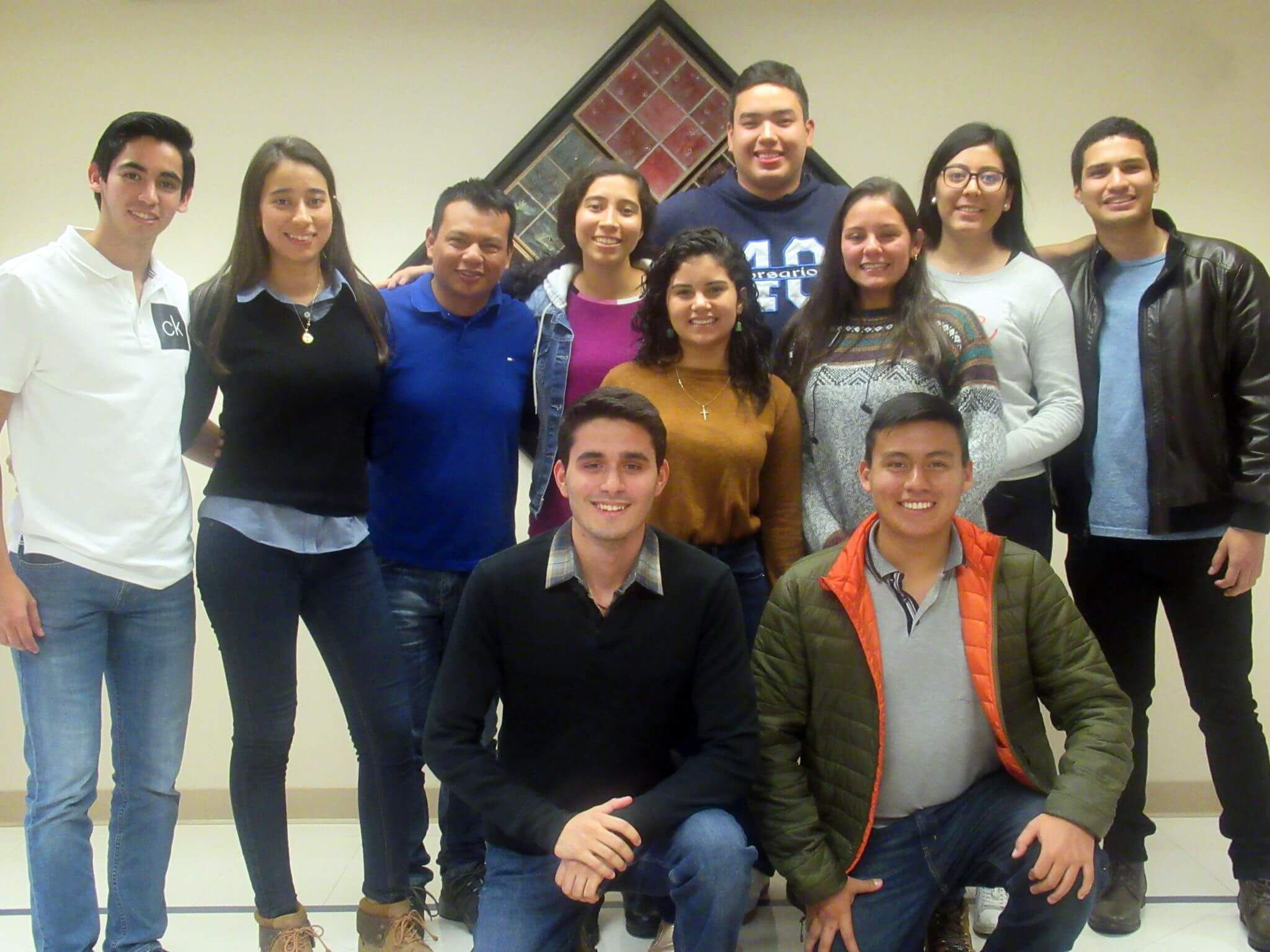 As the Zamorano students’ key administrative contact in IPIA, program manager Trish Sipes is involved in everything from helping them secure visas to planning orientation to recruiting prospective faculty mentors. As the university signaled its closing, all but one of her students were visiting family in the U.S. or sightseeing. She began sending regular updates, one of which began, “My goal is not to scare you, but to inform you …”

“Students had a variety of responses, but all felt uncertainty, ” Sipes says. She communicated not just with the students, but also with her Zamorano counterparts as things changed day by day and often hour by hour. “The advisors on campus at Zamorano have been wonderful to work with. Having someone there the students could call or message for help gave them an extra layer of comfort.”

As events were cancelled, Sipes maintained a calm demeanor she says is essential to the job. But as the outbreak worsened, she was most worried about the students’ health and safety. “You don’t want to have somebody come here for a positive educational experience and have them end up in a hospital,” she explains. “I knew we could work through housing, extra grocery money, extra money to pay rent. I knew we could get them home.”

Members of Purdue’s Association of Zamorano Alumni, who had helped find housing for the interns and transported them from the airport, stepped up again in March. “The alumni association is a great resource for them,” Sipes says. “It makes a big difference to have graduates from your own university here who know where you’re coming from and where you’re going to.”

On the food science side, departmental staff members Adrian Peacock-Downey and Cory Brenner were administering the program and providing hands-on help to the Zamorano interns.

“We were not pushing to send all the students back home in very early March,” Nielsen says. “We didn’t want to treat them differently from undergraduate students doing work in our labs. We and the Zamorano administrators didn’t imagine their home country borders would be closed so they couldn’t get home.”

But Purdue then announced its campus closure. “As time went along, it became more difficult for them to get home,” Nielsen adds. “Very quickly, countries started closing their borders.”

One intern had gone to Ecuador for spring break and couldn’t come back for the second half of the internship. With Purdue assistance, students left as circumstances in their home countries’ allowed safe arrival. Two who could not afford last-minute commercial bookings went on humanitarian flights.

In the meantime, the Nielsens took the remaining interns home-cooked meals each weekend, as the group consolidated from three housing locations to one. “It was a way to make sure they were okay and felt somebody at Purdue was still watching out for them,” Suzanne Nielsen explains.

The last two food science interns left in late May, one back to Zamorano and the other to live with a relative in Chicago. The faculty supervisor of one of them, Professor of Food Science Bruce Applegate, has mentored interns since the program began. “The students who come here have a lot of discipline and a great work ethic,” Applegate says.” They really want to learn, and they’re working on things we need done.”

Student-faculty relationships are continuing virtually as needed for the students to meet academic requirements for their BS degrees. Applegate’s intern completed his independent research on pathogen detection using phages and is progressing on his thesis. The two work back and forth through email and meeting software.

It took two weeks for the intern who worked with Yaohua “Betty” Feng, assistant professor of food science, to get home in late March. The two met virtually every week until late April and on project team meetings every other week. The student was challenged to find stable internet, and during one week, had no electricity.

“Despite the challenges, we managed to keep her project rolling,” Feng says. “She is still involved in the project and collecting data virtually. We hope to finish all data collection by the end of July, and she will be tagged along during the data analysis. At this stage, we are still planning to write up the experiment she is involved to get a peer-reviewed publication out early next year.”

Montoya, who credits Sipes for her steady support, flew to stay with two sisters who live in North Carolina March 25 and home to Honduras May 8. Her early departure hasn’t quashed her enthusiasm for Purdue, however. “I had amazing experiences and had the privilege to meet such wonderful and professional people,” she says. She hopes to return for graduate study in 2021.

The College of Agriculture accounted for more than a third of Purdue researchers who asked for access and support to continue critical research when facilities closed this spring.

With about 15 wiliwili trees in the Lilly Greenhouses, and only 150 left in the wild after an insect pest decimated its population, Purdue oversees an important concentration of this deciduous tree native to Hawaii. Scott McAdam, assistant professor of botany and plant pathology, has been growing the trees for three years.

“My research is at the intersection of food science and nutrition – creating new foods that impact health,” explained Sarah Corwin, a doctoral candidate in the department of food science. “We are translating science all the way to something that could impact lives.”

“I had heard about Purdue when I was in Africa; how it requires you to be smart and to work extra hard, but that the university is unique,” said Theoneste Nzaranyimana, “I was inspired that if I get into this university, my dream could come true.”

The College of Agriculture accounted for more than a third of Purdue researchers who asked for access and support to continue critical research when facilities closed this spring.

With about 15 wiliwili trees in the Lilly Greenhouses, and only 150 left in the wild after an insect pest decimated its population, Purdue oversees an important concentration of this deciduous tree native to Hawaii. Scott McAdam, assistant professor of botany and plant pathology, has been growing the trees for three years.

“My research is at the intersection of food science and nutrition – creating new foods that impact health,” explained Sarah Corwin, a doctoral candidate in the department of food science. “We are translating science all the way to something that could impact lives.”

Marian Rodriguez-Soto remembers visiting her aunt’s garden as a young girl and being puzzled by the cabbages. Some looked different, so she asked her aunt for an explanation. “She told me they were sick,” Rodriguez-Soto recalled. “I was little, so my mind was blown – I didn’t believe that plants got sick.”