oming to Purdue, Clayton Hicks had much of his academic plans figured out. What he did not bank on, however, was carrying them out in the College of Agriculture or receiving the France Córdova Leadership in Action Award. Presented to graduating undergraduate or graduate students who have demonstrated success, integrity, influence and vision in leadership roles, the Córdova Leadership in Action Award honors one male and one female student annually.

Hicks, who will graduate with a Bachelor of Science in Biochemistry and a Bachelor of Arts in Philosophy, always knew he wanted to go into medicine; however, that path took an unexpected direction after a campus visit. 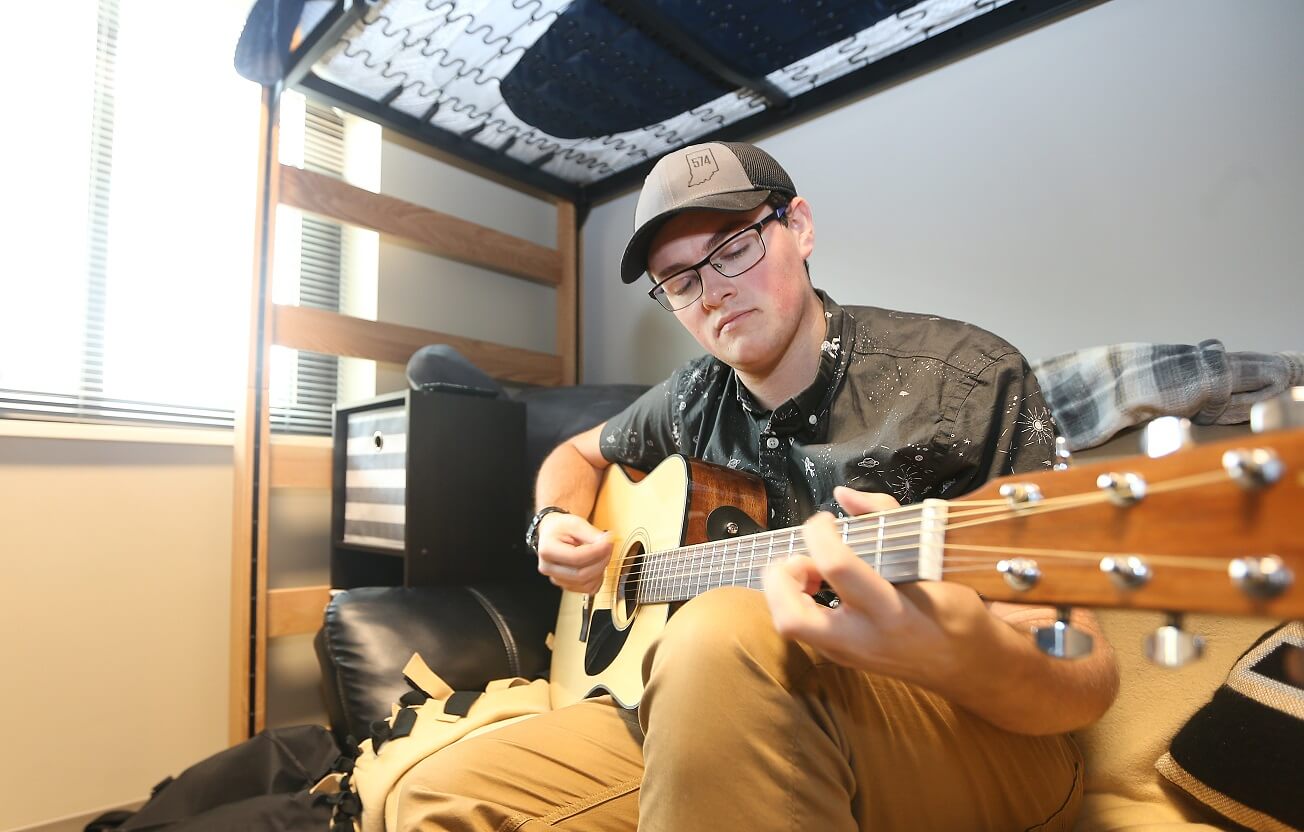 “When I first came to visit Purdue, I had no idea there was a department of biochemistry in the College of Agriculture,” he said. “And it was actually when I came to visit the honors college that my student ambassador said ‘Oh you should check out the biochemistry program in agriculture.’”

Hicks looked at the department and decided he wanted to study with faculty doing research in all areas of biochemistry.

“Some faculty researchers are working with plants; some are working on cancer research; some are doing drug discovery; and that only scratches the surface,” he said. “I did not have a full understanding of everything agriculture includes—which is anything to do with food, anything to do with basically any living organism. Human health is part of agriculture as well. So, now I explain that to incoming students.”

One of the first leadership roles Hicks had as an undergraduate was as an ambassador for the honors college, where he spoke with prospective students. He said one of his most significant leadership roles was his position on the Purdue Foundation Student Board.

“We educate the student body about private giving and try to instill the mindset that private philanthropy and giving does not have to be a million-dollar gift,” he said. “We’re helping students understand the importance of why it is essential to give back, whether it be with your time, talent or treasure, and to find that program or the people they want to give back to after graduation or even while they’re students.”

It's not a coincidence that many of his leadership roles dealt with talking to his peers. Even back in high school when Hicks put together study groups and tutored other kids, his knack for teaching was hard to miss. That knack flourished into a passion he plans to pursue by eventually teaching and practicing medicine at a research or academic hospital.

“I guess I wouldn't have said I knew I was interested in teaching in high school, but that has always been important to me. Then coming to college, seeing the roles that TAs have in classes, I saw it as a way to give back, but also to train myself to run a classroom and get experience grading, giving lectures and running review sessions.”

As an undergraduate, Hicks took a basic biochemistry class with Professor Clint Chapple, and immediately knew he wanted to TA for him in that class specifically, even though there had never been an undergraduate in that position.

“In Dr. Chapple’s words--I was very persistent in asking if I could TA for him,” Hicks said.

“While he completed his study abroad experience at the University of Exeter, Clayton asked about the possibility of being a teaching assistant in my BCHM 100 class. I initially didn’t take action on his request, but Clayton would not relent! After four or five requests, I got permission to add Clayton as a TA. Clayton immediately identified things he could do to help students—such as offering additional help sessions prior to quizzes and exams and providing feedback to the students on ungraded assignments. Students commented on what a help Clayton was and how he was excellent at explaining the class material.”

For Hicks, the experience was transformative, definitely worth his persistence.

“It's interesting because Dr. Chapple teaches basic biochemistry through the process of looking at diseases. Learning what's right by looking at when it's messed up or when it's not functioning correctly is a great way to learn the concepts, and I also think he just does an incredible job of explaining the concepts in a lecture setting.”

These experiences are just of few of the many Hicks has had that have also helped him gain what he calls “soft skills.”

“Soft skills are, at the end of the day, some of the most important things that you develop. All that experience I've had to develop myself as a person, as a leader, as a better friend and as a better citizen have not necessarily been learned from classwork, but from the other experiences I’ve had,” Hicks said. “People on campus truly care about students and help the next generation by raising up leaders and citizens who want to give back to their communities.”