For Mark Russell working with animals is all about the people

When asked about his career within the College of Agriculture, Mark Russell, professor and head of the Department of Agricultural Sciences Education and Communication (ASEC), admits this isn’t the path he initially envisioned for himself. Originally, he said, he wanted to be a veterinarian.

“I thought of myself as a failure many times,” Russell said. “I didn’t get into vet school, which was my dream for so long. I still knew I wanted to work with animals, though, so I found another way: working with people who work with animals.”

On Dec. 11, 2020, Russell accepted the Frederick L. Hovde Award of Excellence in appreciation of his commitment to educational service in rural Indiana and beyond. Indiana Farm Bureau has conferred the honor annually since 1972.

Discussing his failures after receiving a prestigious award reveals his humility and reinforces the message he always shares with students: “If something is not right for you, you’ll know. You have to take time to ask questions, learn and work really hard to help people solve their problems.”

Russell began his work at Purdue as an animal sciences professor with an Extension appointment in the early 80s. In 2015, he made the unusual leap from that department to his current position in ASEC. Russell’s focus on cultivating the next generation of Hoosiers in the agricultural sector along with supporting everyone from researchers to youth leaders  to horse breeders has not wavered.

Raised on a small dairy farm in upstate New York, Russell always knew he wanted to work with animals, especially horses, which he grew up riding and training. When dreams of veterinary school fell short, he broadened his perspective to a career in animal sciences, which Russell said allowed him to work with animals and people in nuanced and unexpected ways. 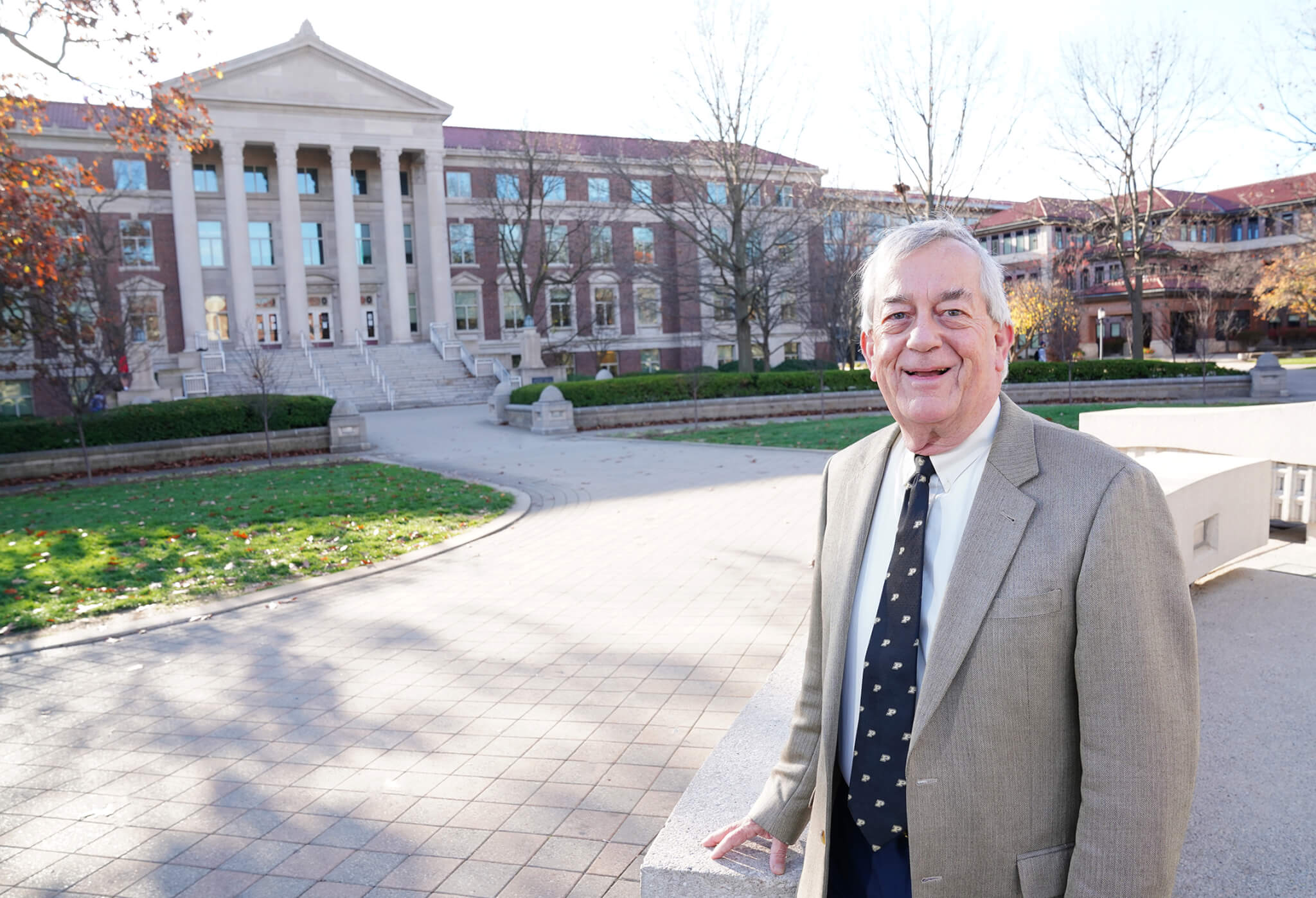 Russell’s first position with the animal sciences department at Purdue was an 80 percent Extension appointment. He became involved with Hoosier horse industry, training and management communities, working with farm owners as well as 4-H and FFA horse judging teams and the Purdue team. “I became less interested in the amino acids of horses and more interested in people,” Russell said. “I began to realize nutrition wasn’t the only way to help or work with horses. The best thing I could do was help people work with their animals.”

Don Villwock, owner of Villwock Farms, has worked with Russell in his Extension capacity over the years, and said there are few who better exemplify the mission of a land-grant university and passion for Extension work.

“Russell stands tall among all who live and work in the agricultural arena in Indiana,” Villwock said. “He has a passion for excellence and always has had with Indiana’s 4-H youth and Purdue students. His personal commitment to improving quality of life has been a cornerstone throughout his career.”

As international work and exchanges became a priority of the college, Russell’s Extension work took him beyond the borders of the U.S. In the early 2000s, his department was challenged to provide an international trip for students. He began taking groups to places like China, Brazil, Hungary and Romania. 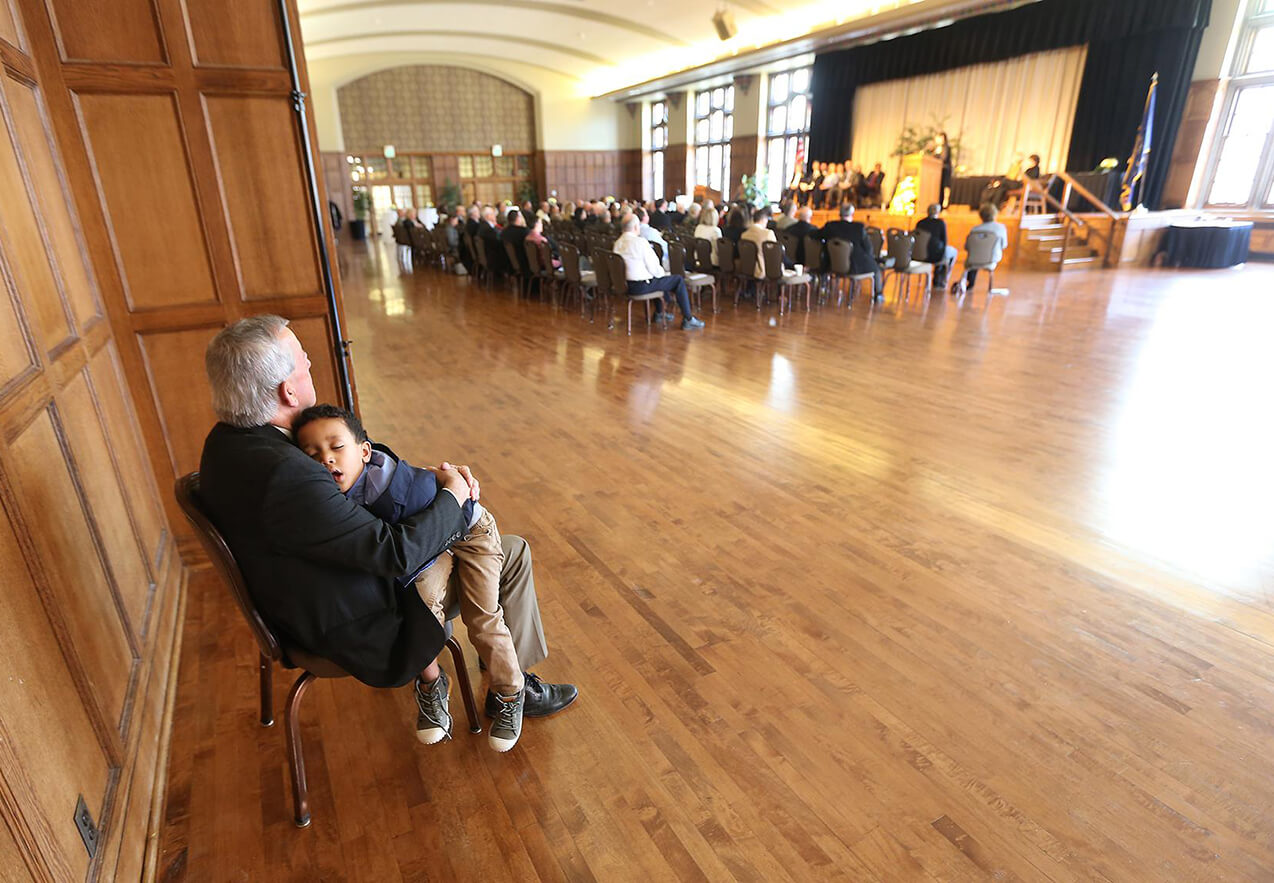 Mark Russell can include babysitting duties on his Purdue resume. During the Distinguished Ag Alumni event in 2018, Russell held a napping David Steiner so the rest of the Steiner family could enjoy the ceremony in the Purdue Memorial Union. David’s dad, Eric, was a 2018 honoree and a former student of Russell. Photo by Tom Campbell.

“We would go to three different places for a week each and get to know the farmers and focus on the animals and the livestock industry there,” Russell explained. “Around 2005, however, I realized we were seeing a lot of places, learning a lot, but we weren’t engaging deeply with the people.”

“A major priority has always been to help students and people to have an ability to work across various borders,” Russell continued. “I really look for opportunities to teach engagement methods, how you go into a community and foster learning and an exchange of information.”

Developing this toolkit for himself and others is what eventually led Russell to transition from animal sciences to ASEC, where he continued to invest his time and resources in developing student engagement and the skills they need to succeed in their chosen field.

“Over the years, through my Extension work, I listened to so many employers saying ‘your students know science, but we have problems with how they work in teams or how they write.’ So, I became involved in leadership development within the college, teaching leadership skills for a diverse workplace,” Russell explained. “My transition to ASEC freed me up to pursue this. The idea of helping others to communicate science and research, and how this ties into service learning, this is where I’m needed now.”

Karen Plaut, the Glenn W. Sample Dean of the College of Agriculture, said Russell’s ever evolving and developing view of the world of agriculture, and his willingness to step in wherever he knows he can make a contribution is an embodiment of the Hovde award.

Mark Russell is the kind of educator and leader who won’t tell you about his commitment, he will show you,” Plaut said. “Mark’s dedication to students and Hoosiers is evident in every facet of his work, whether mentoring undergraduate and graduate students or spearheading international service learning trips. Everything he does is in service to building a strong, diverse and inclusive agricultural sector in Indiana and beyond.”

Russell said it is an honor to receive an award he remembers several of his mentors receiving. Even more gratifying is teaching and mentoring the children of students he worked with years ago. While students come and go and professions evolve and agricultural landscapes shift, one constant remains for Russell: youth are the future of agriculture and the best way to steer that future is to educate and support students.

“The first few years after my PhD I worked in horse nutrition,” Russell recounted. “People would ask me how to feed their horses, I would tell them, but then they never did what I suggested. I realized I wasn’t solving their problems, I was telling them what to do. You need to engage with their perspective to maintain a constructive dialogue. That’s the lesson I carry with me when working with students. Whether they want to be a vet, a farrier or a teacher, I never tell them what to do.”

Curious about canning? Find out how to safely preserve food at home.

Yang was explaining why she wanted to pursue a landscape architecture project focused on environmental justice for her capstone project and how she became involved in a Hartford City, Ind., initiative to reimagine a brownfield site and cancer cluster.