Outstanding in their field: Tractor efficiency increased, thanks to Purdue hydraulics research

odern agricultural tractors contain so much cutting-edge technology, they rival even the latest spacecraft. But the back end is still old-school, relying largely on fossil fuels. So any optimization in tractor efficiency is a huge win for the environment.

With this in mind, Purdue University researchers have undertaken a $3.2 million Department of Energy project to optimize the hydraulic systems that connect tractors and implements.

“Fluid power is everywhere,” said Andrea Vacca, Purdue’s Maha Fluid Power Faculty Chair, professor of mechanical engineering and agricultural and biological engineering, and director of the Maha Fluid Power Research Center, the largest academic hydraulics lab in the country. “It’s used in airplanes, in cars, and in all kinds of heavy equipment. A tractor is an example of a vehicle that uses fluid power to actuate everything from the steering and propulsion, to powering the implements it pulls behind it.”

But powering the implements has proven to be a problem. The hydraulic control system of the tractor has shown only 20% efficiency when connected to the hydraulic systems of certain implements like planters, seeders and bailers.

“There’s a conflict in the controls, where the two systems are almost fighting each other,” said Patrick Stump, a Ph.D. student in mechanical engineering. “As a result, when it’s connected to a planter, the tractor always has to run at extremely high power, which wastes fuel and increases emissions.”

In this study, funded through the U.S. Department of Energy’s Office of Energy Efficiency and Renewable Energy, Vacca’s team focused its attention on a specific combo of tractor and planter, both provided by Case New Holland Industrial, with hydraulic systems provided by Bosch Rexroth. See video.

The planter is 40 feet wide, with 16 planting rows.

“Each row has multiple machines working together to plant the seed,” said Xiaofan Guo, a Ph.D. student in mechanical engineering. “There’s a cleaning wheel in front to remove existing vegetation. A cutting disc cuts a tiny ditch in the ground, a motor actually drives the seeds into the ground, a sprayer feeds water and fertilizer into the hole and then a final disc covers the hole. There are 16 of these planting rows, which need specific amounts of pressure to successfully plant the seeds. And all of them are powered by a single hydraulic system.”

To tackle the problem of optimizing the tractor-planter combo, Vacca’s team chose a three-phase approach. First, the researchers needed to characterize the hydraulic system and build a simulation model in the computer.

“These tractors are expensive and complex machines,” said Xin Tian, a Ph.D. student who developed the models over a four-year span. “So we started by modeling individual components and testing them in a stationary condition here in the lab. When those are accurate, we combine the component models into a system – and test the system – so we can verify that the entire model is valid. The model is so big and complex, my team calls it ‘The Monster!’”

Once they had validated their model, the researchers moved to phase two: developing solutions they could test.

“Different planting conditions require different amounts of pressure and flow rate,” Tian said. “If the model shows promising improvements in power and efficiency, then we can begin to implement these changes under real-world conditions.”

For the third phase – real-world tests – the team outfitted the tractor-planter combo with a myriad of sensors.

“We need to know how much power the tractor is consuming, what the hydraulic pumps are doing, and what the pressure and flow rates are throughout the planter,” said Jake Lengacher, a first-year Ph.D. student. “All of that wiring leads into a new data acquisition box we installed in the cab, so we have a full picture of what’s going on during a planting cycle.”

Thankfully for the team, Purdue has plenty of places for giant tractors to roam. The College of Agriculture allotted Vacca’s team a quarter-mile strip of land at the Animal Sciences Research and Education Center in West Lafayette.

“We are very fortunate at Purdue,” Vacca said. “We have a lot of lab space at Maha where we can test these large machines under controlled conditions; and Agriculture also has lots of farm plots where we can conduct field research.”

And since none of the team members had ever operated such a large tractor in the field, Case New Holland provided training to teach them how to drive. 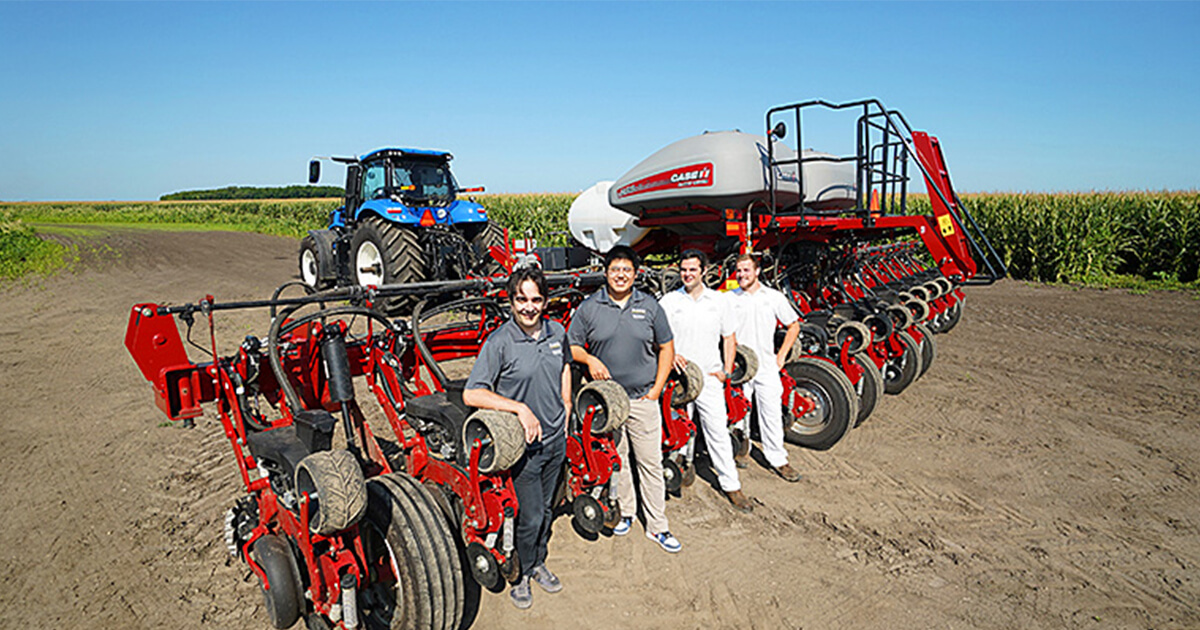 “The sheer power of a 25,000-pound tractor with 435 horsepower, towing a 10,000-pound planter – it’s amazing,” Stump said. “But there’s also quite a lot going on in the cab, especially to operate the planter. It’s definitely a two-man job, so usually Jake is also in the cab monitoring the data on a laptop.”

The team conducted several runs in the spring of 2021, where they planted corn seeds at different pre-determined engine speeds and planting rates. Combing through the data, they found that their new hydraulic control systems translated into an overall 25% efficiency increase.

“Given the amount of fuel that a typical tractor consumes, that’s a massive improvement,” Vacca said. “And this is only the beginning. Our project goal is to double the efficiency of the overall hydraulic control system. In the future, we plan on instituting a pressure control approach for the control logic, which has never been attempted in agricultural vehicles.”

“When I saw the data that proved our solution worked, I was so happy,” Guo said. “I grew up in a city, so being out on a farm like this is a pretty exciting experience for me. My specialty is control systems, so it was so interesting to see our theories in the lab being put to the test in the real world. Fluid power is a well-established field, but there is still so much potential to propose new systems and new architectures to make things even better.”

Stump said, “I never imagined I would be driving a tractor through a farm field for my Ph.D. I had plans to go into aerospace. But the hydraulics on these tractors is every bit as complex as an airplane or a rocket. Diving deep into fluid power has been hugely applicable to my future in engineering.”

Tian said, “It’s certainly the highlight of my time here at Purdue. I put so much time into these models, and to see the improvement in the results was really a happy moment for me.”

Vacca said, “Seeing our students’ hard work – and witnessing an idea get from the lab to the field – that’s really the best part of our job.”